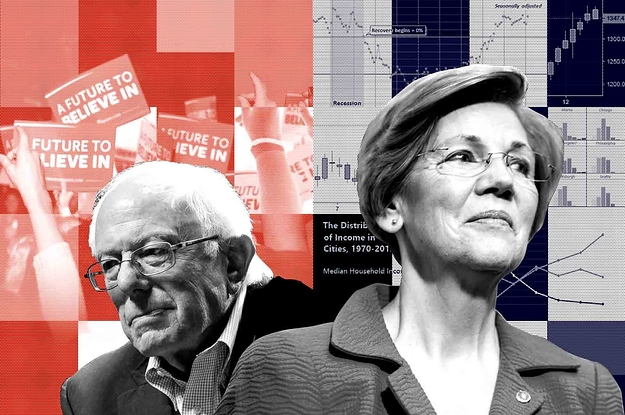 Of course, during Barack Obama’s presidency, many Bernie Sanders supporters said that Liz, as they affectionately called Elizabeth Warren, was the only true progressive champion of America. Of course, they had begged Liz to run against Hillary Clinton. And when that did not happen, every time they were accused of sexism with respect to Clinton, they said, “I would surely vote for a woman, but Clinton is really a Republican and I do not trust her. Oh, if only Liz would run.” And in 2017, when Liz furiously opposed the appointment of the demonstrably racist Jeff Sessions as attorney general and did not let herself be silenced by the reprimand “nevertheless, she persisted,” the supporters adopted that phrase as a feminist battle cry.

It was, therefore, not so surprising that “Liz” Warren, continuously leading in the battle against the erosion of democracy and the rule of law, against obscene inequality and the power of big money, against systematic racism and the destruction of the planet, decided to have a go at the presidency. And it wasn’t all too crazy to think that she could count on the passionate support of all those leftist warriors, who had hoisted her on a shield for years.

The only thing that Liz forgot, the importance of which can by no means be underestimated, was that she was a woman. Because once she put herself up as a candidate and kept rising in the polls, Liz was not called Liz anymore, but chillingly, she was called Warren. People said, “I don’t trust her,” sounding loudly in many tones on social media. Warren was a “snake,” a liar, a fake progressive. She had tarnished Bernie and whoever touched Bernie was, in any event, the umpteenth corporate Democrat without principles.

The fact that this was a rather absurd and gross accusation against a woman who is seen by Wall Street as a big, red danger sign, did not matter. Suddenly they could not swallow the fact that Warren was registered as a Republican until 1996, because everyone who gains new insights during their lives apparently deserves to be condemned for eternity based on earlier beliefs. And those who dared to point out this sexism to those bloodthirsty backstabbers were met with righteous indignation: I would surely vote for a woman, but Warren is really a Republican and I don’t trust her, they said.

The careful erasing of Warren was almost complete. After disappointing results in Iowa and New Hampshire, incidentally her own fault, her campaign was in dire straits. The media ignored her; the progressive voter had all but walked away. And then came the debate on Wednesday night, in which she put billionaire Michael Bloomberg in his place and proved how sad it is that she has already been written off by so many.

I asked a friend in America, who supports Bernie unequivocally, how such revulsion of Warren is possible. He replied that we should not make the Twitter haters bigger than they are, but that apart from that, there is a sense that Warren will ultimately back down from big changes. This reason is the fundamental difference between her and Sanders: Warren says that the system works, but that there is a chink in the armor. Sanders says the system is the problem.

The fact that such a difference leads to a fundamental choice for leftist voters seems only right to me. But it does not justify what is still happening openly: Warren is above all the victim of undiluted misogyny.