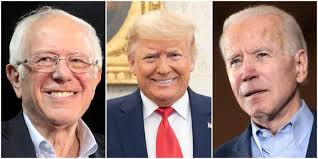 Pete Buttigieg left the race a few days ago, prior to Super Tuesday; neither his age, nor how provocative his sexual identity was in the face of an avowedly conservative president, inspired supporters.

How Ironic. Donald Trump seems to be enjoying what happened to the Democrats. What appeared to be a contest among candidates with somewhat diverse profiles – the establishment candidate, the social democrat, the first openly gay aspirant, the millionaire paying for his campaign out of his own pocket and a political veteran – has been watered down, eliminating the emerging favorite among a generation of new voters who, more than ever, will have to be involved in the future.

However, that’s not how it was. At the moment the contest is only between Joe Biden and Bernie Sanders. Biden has 627 delegates. Sanders has 551. Each needs more than 1,900 delegates to win the nomination, which will be announced next summer at the Democratic National Convention.

Something happened to the equation, with the numbers disappearing despite enthusiasm that had begun to grow. Buttigieg left the race a few days ago, before Super Tuesday. Neither his age nor the provocation caused by his sexual identity in the face of a president so openly conservative, inspired supporters. He emerged with only one victory in his pocket, insufficient to play a relevant role on the day that the delegates are won from 14 states. And so Buttigieg withdrew.

After that, it was Michael Bloomberg. Elizabeth Warren followed a day later. Hillary Clinton appealed for party unity. A week ago, she gave assurances that she would support the party, no matter who the candidate is. “They have been four terrible years. We cannot have another four equally terrible years,” she emphasized.*

The issue now is whether those four terrible years which the former secretary of state referred to will bring people to the polls. “(Bernie) was confident that it would be the young who would lead the mobilization. He was mistaken. In no state did those under 30 surpass 20% participation, according to research at the polls published by The New York Times,” El Pais reported yesterday. This absence relegated him to second place, despite the fact that throughout Tuesday, prominent figures and famous personalities endorsed the self-proclaimed socialist in droves (a mistake, according to Paul Krugman).

And if a veteran politician who speaks forcefully to his own party’s establishment, and who promises to end the defects in the entire system, does not generate voter enthusiasm, not just that of the Democrats, will a profile of someone who has adapted to the spheres of power far removed from today’s White House be sufficient to remove Trump from it?

Let’s keep in mind that even an impeachment trial did not succeed in removing Trump. How is Biden going to do it? Or someone like Sanders, who has experienced the biggest gap between what he thought were people’s intentions and actual votes? The irony of Trump does not come for free.

*Editor’s note: Although correctly translated, this quote could not be independently verified.