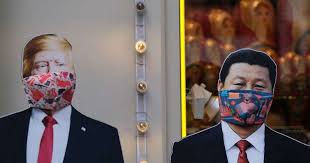 On March 26, U.S. President Donald Trump signed the TAIPEI Act, thus formally enabling it to take effect. On the same day, the U.S. exceeded 82,000 confirmed cases of COVID-19, now making it the country with the highest total of confirmed cases worldwide. With the pandemic situation becoming increasingly more strained in the U.S., Washington is still playing political games. How could the U.S. waste the precious time China won combating its epidemic full-force? How could it watch with open eyes as the pandemic rapidly worsened? The reasons are now quite clear.

The TAIPEI Act passed in both the Senate and the House, and was later signed by the president. It represents, to a large degree, Washington’s aspirations and attitudes as a whole with regard to China: to fully use Taiwan as a playing card in a strategic contest against mainland China. Playing this well-worn card, however, especially in this extraordinary moment of global struggle against a pandemic, will only backfire.

The TAIPEI Act promises to support the strengthening of Taiwan’s diplomatic relationships, which, to put it frankly, means it warns Taiwan’s current few small diplomatic allies not to cut off relations with Taiwan at the risk of the U.S. sorting them out. This is completely unreasonable. Some 180 countries, including the United States, have built relations with the People’s Republic of China, and there has long been common international consensus and agreement among the people about the One China Principle. What right does Washington have to prevent other sovereign countries from making their own independent choices? This is excessively unreasonable and overbearing.

However, that unreasonable and overbearing strategy is increasingly less viable in this world. Before the TAIPEI Act was officially launched, Washington not only threatened, but bribed those small diplomatic allies of Taiwan. To what end? After Tsai Ing-wen took power, Taiwan lost seven diplomatic allies in succession. This shows that even a country as strong as the U.S. can’t push its own agenda by violating internationally acknowledged principles at the expense of other countries’ interests.

Even if the remaining 15 countries which have diplomatic relations with Taiwan – seeking petty favors from the Democratic Progressive Party government amid the fear of threats and intimidation tactics from Washington – choose not to break relations with Taiwan, then what? Will Taiwan have greater leeway in the international sphere? Can the few Taiwan independence activists rest easy knowing they have support? In the end, the TAIPEI Act can only provide the DPP authorities little comfort. The Washington politicians who concocted this act know that, so the wording of the bill’s relevant promises is very disingenuous.

Some members of the Legislative Yuan of Taiwan raised questions about portions of the TAIPEI Act regarding the strengthening of economic and trade relations between the U.S. and Taiwan. “If the U.S. requires that we import American beef and pork with leanness-enhancing agents, will we agree?” they asked. Taiwanese Premier Su Tseng-Chang was vague and unwilling to provide a clear answer. Clearly, in order to cash Washington’s political bad check, the DPP authorities sold out Taiwan’s true interests. This is truly a disastrous transaction for Taiwan. Some Taiwanese who are online see through this clearly. They have commented, “If it’s signed, so what? A useless bill, they accepted money to help put on a show.” “What an old trick, they want to exploit us again.”

The Taiwan issue touches on China’s core interests. It will tolerate absolutely no challenge on the issue. Since the DPP government came into power, it has taken many small steps with separatist tendencies, and has earned Washington’s begrudging cooperation and support, such as the TAIPEI Act. This really creates more uncertainty in the Taiwan Strait. It must be clear that the initiative for the Taiwan Strait’s situation remains firmly in the hands of the mainland. Cross-Straits unification is the iron will of the Chinese people; anyone who interferes with it will only meet a devastating and crippling end. The DPP government should harbor no illusions about this.