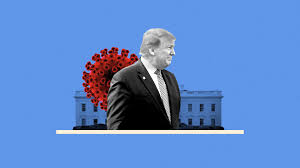 Every time Donald Trump opens his mouth we think it will finally be the moment that costs him reelection. And with Donald, there are no half measures; you either love him or you hate him. It seems that this perfect balance has helped him remain tremendously popular in his country, whether that’s good or bad. He doesn’t apologize, he is politically incorrect, and he will steamroll anyone who gets in his way without hesitation. He is the living symbol of American power.

On one side, we have the American people who laud him for his “America First” talk. It boosts their confidence to have a leader on their side who is willing to put everything on the line in exchange for their well-being. We witness this not only in the U.S., but around the world wherever Trump travels. He orders a hamburger and speaks about how great his country is every time. This behavior is contrary to that of his predecessor, Barack Obama, who tried to mix in, and apologized on behalf of the U.S. wherever he went. His compatriots did not celebrate him in this respect, although he was undoubtedly more diplomatic than Trump.

On the same side, we find American business owners. No one has profited more from Trump’s presidency than they have. Donald looks to them as the engine of the economy. He even engaged in a trade war with the People’s Republic of China to benefit American industry. If we look at it in economic terms, it is undeniable that his plan is working. Before the pandemic, the U.S. enjoyed unprecedented growth on Wall Street.

On the other side, we have Trump’s archenemy: the mass media. He has fought a death match with them since the start of his first presidential campaign, directly targeting CNN, The New York Times, and Latino media outlets such as Univision. They are part of his plan. Never before has one person been able to discredit such serious media outlets the way Trump has. They fall into his trap, attacking him at every opportunity.

From week to week, Trump engages in a battle royal over each of his consistently controversial decisions. He always proves victorious one way or another. Although his decisions seem to be impulsive and senseless, they are all made for his benefit with a high degree of political precision. This is customary with extremist political factions. Since extremist factions are tremendously popular, people like to hear which side their leaders are on. Nevertheless, could mismanagement of the public health crisis be the case that costs Trump the election in the final stretch?

Trump’s handling of the pandemic has been very controversial, to say the least, due to his tremendous ego (or, as some might say, excessive confidence). He started out by saying that the coronavirus was just another attempt to damage his presidential reelection campaign. Next, he said the coronavirus was simply a flu that wasn’t going to be a serious concern for the country. He followed this with assurance that Americans and the health care system were perfectly prepared for whatever was to come. And, of course, we can’t forget the remaining number of absurd declarations we’ve grown accustomed to hearing from him and his team.

When things finally began to worsen in the U.S. and Donald found his back against the wall, he decided to use a full arsenal to rectify damage to his image. The plan has two parts: first, to divert attention from himself by discrediting whoever was necessary and refocusing attention from the virus to China, even to the point where he referred to COVID-19 as the “Chinese Virus.” Domestically, he has handed off responsibility to the governors, who have largely been opposed to his decisions and have made quarantine mandatory in their respective states. The president has ultimately had to put up with this, but not without taking a few jabs on social media first, tweeting “Liberate Virginia!” and “Liberate Michigan!”

The World Health Organization was not spared from his attacks either. Trump has suspended funding to the organization, claiming that the spread of the pandemic in his country was due to the WHO’s mismanagement of the emergency. This decision comes as a grievous blow to the WHO as the U.S. was the organization’s largest contributor. If this organization was ever important to the world, it is now.

The second part of Trump’s plan is to inject money into the economy to cover the basic needs of citizens while the majority of businesses remain closed. The astronomical amount of money approved by the Senate for economic relief is unprecedented. Although it’s hard to believe, all of this only serves to make Trump more popular among his voters; his political decisions are calculated with pinpoint precision. One would think he might lose reelection this way, but he returns and remains unscathed, standing before his throne as always.

There are still some months remaining before the most anticipated election in U.S. history, an election which has essentially been a subject of conversation since the day Trump was elected president. At this point, it all seems to be a matter of timing with regard to how the pandemic unfolds, as well as whether Trump’s economic recovery plan proves truly effective. From my perspective, I think Trump will find a way to take advantage of the situation. He will emerge as the favored candidate at the end of the presidential election campaign, and we will see another four years of Donald in the White House.

About Kaitlyn Diehl 20 Articles
Kaitlyn Diehl studied Spanish and Political Science at the University of Delaware and has recently obtained a certificate in Spanish to English translation from the University of Massachusetts Boston. She is passionate about travel and intercultural communication, so the opportunity to contribute to Watching America is something she is very excited about.