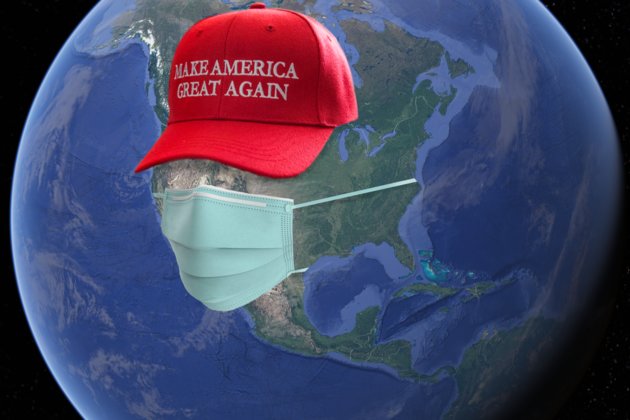 In terms of international relations as well as the conduct of his crazed presidency, President Donald Trump has been far from restoring America’s so-called greatness for three years now. The pandemic demonstrates this in fast forward mode. The U.S. is many things at the moment, but it is not “great again.”

In addition to this, and since it is increasingly evident that the black cloud of the coronavirus will not have blown over by November’s presidential election, from here on in, China will be the enemy for Trump that the USSR was for Ronald Reagan, with the same slogan; an enemy in terms of health, economics and geopolitics, and a highly visible one.

The White House could have avoided coming down on Beijing, if only by not talking about the “Wuhan virus,” given the trade agreement which was concluded last year following a huge song and dance, an agreement which the American president was expecting to use in his campaign.

The tone has radically changed in the past week with Trump now giving credit to the theory linking the spread of the coronavirus to acts of negligence committed at the P4 maximum security virology lab in Wuhan, the Chinese city where the epidemic began. On Sunday, and again on Wednesday, Trump’s secretary of state, Mike Pompeo, continued to cut corners, stating that this theory was based on “enormous” and “significant” proof, asserting the charges despite the reluctance of American intelligence services to draw definitive conclusions.

Offense is the best defense, as Trump would say. And it wasn’t that long ago that he claimed China was trying to hurt his reelection prospects in favor of Democratic candidate Joe Biden.

What does it matter to the Republicans if the problem started at the Huanan seafood market or if it escaped from a lab due to a security failure? The Chinese regime’s pronounced lack of transparency in this matter, as in everything else, will inevitably lead to people casting casual doubt amid xenophobic insinuations. The opinion polls have been quick to show that it is politically advantageous to denounce the “lies” coming from Beijing.

The experts say that in doing this, the global crisis caused by COVID-19 and the way it has highlighted supply chain issues will, in the long term, further the “decoupling” strategy that the U.S. adopts in relation to Beijing and which has markedly intensified under Trump. It is a strategy which aims to contain the expansion of Chinese power while blocking China’s access to the American market. And it is a strategy which will no doubt continue to be promoted, whoever the next president is, since the Democrats share its aims.

More dangerous for Trump, whose prospects are jeopardized by the economic crisis, is the enemy within, the Democrats, despite the weakness of their presidential candidate, Biden. There is a lot of talk about the borders which exist between countries in reaction to globalization, but there is less talk about those which exist within the U.S., where post-lockdown protocols are being organized from one town or state to another, resulting in alarming chaos.

A highly interesting phenomenon is that in the past three weeks, three regional state alliances have formed to mitigate the ineptitude of a presidency that has been much criticized for its handling of the crisis, including criticism from within conservative ranks. One state alliance has formed on the West Coast, led by California, another in the Northeast, centering around the New York Gov. Andrew Cuomo, who many people would like to replace Biden. The third alliance is a grouping of Midwestern states. There are a dozen or so governors in total, most of them Democrats. In other words, the coronavirus has widened the partisan and ideological distancing which is tearing the country apart, so much so that some are wondering, at the risk of turning it into political fiction, if the pandemic is putting the very existence of the Union at risk; that is if Trump, self-proclaimed hero of America’s “greatness,” doesn’t cause it to break up first. The question is, what is it that “separates” California, that causes its governor, Gavin Newsom, to describe it as a “nation-state” and which makes it one of the world’s leading economies?

At an international level, Trump’s pathological and populist objection to any kind of cooperation is destructive but, at the same time, it forces us to reflect on the order according to which the planet developed, one which has become ever more unequal since the end of World War II. In the same way, Trump’s dysfunctional presidency, which is reaching a climax along with this pandemic, is forcing Americans to ask themselves what they are becoming. Every cloud has a potential silver lining.