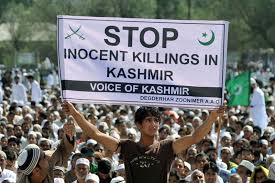 In its newest report, the United States Commission on International Religious Freedom called India the most dangerous country for religious minorities for the first time. The report said that religious freedom is in grave danger and continuing to decline.

The report also said that India has given Hindus permission to commit violence against religious minorities, and consequently, Hindus are committing violence against Muslims and followers of other religions. The Indian police are also helping violent Hindu people. Because of this, the U.S. has declared that India is the most dangerous country for religious minorities.

India fell sharply on the religious map following the Supreme Court decision related to Babri Masjid and the strong criticism of a controversial citizenship bill. This is all outlined in the USCIRF report.*

Pakistan’s Foreign Affairs Minister Shah Mahmood Qureshi has finally made the entire world believe that Indian Muslims are being targeted under the guise of the coronavirus, and that even sick Muslims affected by the coronavirus are being discriminated against. In light of this situation, the Pakistani foreign minister sent a letter to the Organization of Islamic Cooperation’s secretary-general and the foreign ministers of the OIC member states, expressing grave concerns that Muslims living in India are being targeted by suicide bombers. Meanwhile, Indian Prime Minister Narendra Modi and India’s extremist Hindu Party, the RSS, are spreading hatred about Indian Muslims, with the Modi government taking part in a negative way.

The Modi government has completely turned secular India into an extremist Hindu state. The USCIRF report revealed that Modi’s policies are making India a state for radical Hindus, and that Modi’s role is central to all of this negative activity. In this regard, Modi’s track record is terrible. Modi also admitted to playing a negative role in the Mukti Bahini Pakistan Movement of freedom fighters in the tragedy of the fall of Dhaka in 1971. As chief minister of Gujarat, Modi himself was involved in the anti-Muslim riots there, and cases were brought against him. Consequently, the U.S. president barred Modi from the United States, but President Donald Trump later lifted the ban and praised Prime Minister Modi’s Hindu policies.

If the Trump administration continues to support Indian Prime Minister Modi’s initiatives, the few rights granted to the Muslims in occupied Kashmir by the United Nations will be nullified.

All of the international and regional organizations, the U.N. and its Security Council, have sharply noticed Modi’s role in India and its unilateral actions, but the Modi government has ignored global protest, and committed extreme atrocities against occupied Kashmir, Indian Muslims and other minorities.

The Modi government has removed Articles 370 and 35A from the Indian Constitution which prohibited Indian Hindus from entering or governing in Indian Kashmir and solidified its special status. With the removal of these provisions from the constitution, the Modi government gave Hindus the ability to conduct business and work in occupied Kashmir. Because of this constitutional amendment, Hindus have started settling in occupied Kashmir. If this continues, the current Muslim majority will be replaced by a Hindu majority.

The Modi government’s actions are being condemned all over the world and in the United Nations because the U.N. resolutions give Kashmiris the right to establish their independence.

The part of Kashmir that belongs to Pakistan is an established and independent state. Kashmir has its own president and prime minister, and is independent. Pakistan Prime Minister Imran Khan and Commander-in-Chief Gen. Qamar Javed Bajwa have announced that India’s provocations are a threat to peace in the region. The unscrupulous murder of Kashmiris and the targeting of Indian Muslims is unacceptable. Gen. Javed has announced that it will always respond sternly to India. The Indian Army will be dealt with fiercely for violating the ceasefire agreement and for its provocation. Modi’s policies in India continue and will face strong opposition.

Keep watching to see what happens.

*Editor’s note: Babri Masjid was a mosque in India at a site believed by Hindus to be the birthplace of Hindu deity Rama. It has been a focus of dispute between the Hindu and Muslim communities since the 18th century.