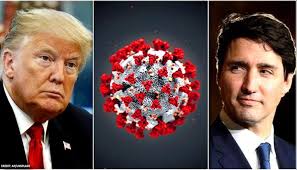 From the Canadian side of the border, we have always observed the Donald Trump phenomenon with strong emotions, which can generally be sorted into three categories.

As in: How on earth could they have voted for him?

As in: Poor, poor Americans who must endure this for four years … and maybe eight!

This is what we have felt most strongly since the beginning of the pandemic. As in: Wow, when we compare our two countries, we are relieved. Especially because we live here in Canada, quite unmoved by the pull of populist and provocative demagogues, à la Trump. The successive failures of Kevin O’Leary and Maxime Bernier are significant proof of this.

This relief has become more pronounced in the last few weeks. We have even passed into another phase: When we compare our two countries, we feel fortunate.

That’s what happened on Monday when the American president confirmed he is taking hydroxychloroquine as a preventive measure despite all the warnings issued in recent months. Every time we think we’ve seen everything, he finds a new way to confound us.

And every time, we thank the heavens that we don’t have such a space cadet in charge on this side of the border.

Listen well: This does not absolve our leaders; they have their faults. They have had highs, but also lows. There have been crisis management failures as much in Ottawa as in Quebec. There have been problems with communication and, at times, contradictions. And we have, without a doubt, not seen the last of it.

Likewise, there are aberrations that defy all logic. These are generally due to the fact that our health care system has become a sprawling, disorganized, terribly difficult beast to tame.

But indifference? Laxity? Alternative facts? Petty and partisan attacks? This was the exception rather than the rule, both for Francois Legault and for Justin Trudeau.

For several weeks, we have observed that we can count on our leaders, who have the public’s interest at heart and who exert considerable effort to manage this crisis in the best way possible. They are not perfect, but they have more virtue than vice.

On the other side of the border, the president of the most powerful country in the world has often behaved nonchalantly in the face of a pandemic. With distrust and arrogance when it comes to scientific facts. And with such narcissism that his own future in politics seems more important to him than the fate of his citizens.

There has been some progress in the fight against COVID-19 on American soil, sure, but it seems to have arisen despite Trump and not because of him.

That said, he is not the only head of state who has failed to rise to the colossal challenge that this pandemic represents. When we compare our leaders with U.K. Prime Minister Boris Johnson, for example, or with certain notorious autocrats, we also feel fortunate.

It has often been said: We will learn many lessons from this pandemic. One of them is that provocative, populist and demagogic politicians have a lot of trouble managing such major crises in a responsible way.

In light of these failures, disruptive presidents like Trump may end up paying the price for the wave of cynicism and anger aimed at the political class that they rode in on to take power. It would be a fitting return to the way things should be.