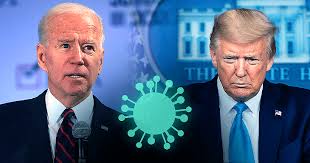 Although pandemic-related topics are at the top of the list, ongoing debate on the economy and inequality continues.

Amid the deepening health crisis (1.38 million cases [of COVID-19] and 83,000 dead) and an ever worsening recession, the U.S. carries on with its election process. The results will have considerable implications for American foreign policy and the international system as a whole.

In an unusual race, Democrat Joe Biden is leading the polls 47% to 42.6%, according to RealClearPolitics. Apart from the overall figures, in which no candidate has yet taken off, the outcome will greatly depend on two factors: a) the number of people that vote, which varies across sociodemographic groups, and b) the geographical distribution of votes, which is crucial for the configuration of the electoral college.

The governments’ response to the current pandemic and its effects on public health care and the economy dominate the election agenda. But there are longstanding issues that continue to be relevant to a polarized U.S. public such as inequality, the conflict with China and the cultural war between conservatives and liberals. We briefly explore each of these issues reviewing recent data, and point out some keys to understanding the debate that dominates the electoral process.

Regarding the management of the crisis, so far Donald Trump remains undamaged by public opinion that is divided by party ideology. The overall approval rate of his administration remains around 45% (43.6% according to FiveThirtyEight), the same as pre-pandemic times. Some 43.2% of Americans approve of his administration’s response to the crisis, a result that is greatly divided between parties with 82.8% being Republicans and 12.6% being Democrats. There is also division over policy strategy for the future. Republicans are more concerned with the reactivation of the economy, whereas Democrats give priority to health care.

The economy will be greatly damaged. The International Monetary Fund estimates that the gross domestic product will drop by 5.9% in 2020, while unemployment has already reached 15.7%. This constitutes a blow to Trump’s biggest political asset before the crisis: a growing economy (2.3% in 2019 and an average of 2.5% during his term) and the lowest unemployment rate in 50 years. The administration and the opposition know that taxes will affect voter behavior. In March, Congress passed a $2.2 trillion measure to help families and businesses (the CARES Act) almost unanimously. There seems to be a consensus on this: 88% of Americans, equally distributed between the two parties, support the measure. (Pew Research Center).

Apart from the current circumstances, the campaign raises long-term issues related to the growing inequality in American society and the uneven impact of globalization in the country. Overall, the electoral agenda shows greater demand for economic equality and a rise in nationalism.

A key issue brought to light by the pandemic is the extreme commercialization and high cost of health care. Some 80% of voters believe that lowering the cost of health care is a priority in the next election (Politico-Harvard). This relates to the precariousness of the American health care system with regard to wealth per capita. The United States is the only developed country that lacks universal health care, and 27.5 million Americans (8.5% of the population) have no health insurance, according to official data.

The recession will probably aggravate economic inequality. A recent study by Pew Research shows that 61% of Americans, predominantly Democrats, believe that there is too much economic inequality in the country, and there are some convincing figures that seem to prove that. Between 1968 and 2018, the wealthiest 20% increased its participation in the national income from 43% to 52%, while the wealthiest 5% increased its participation from 16% to 23%. The United States is the most unequal country in the Group of Seven major industrial nations and political preferences are changing accordingly. Recent studies show that 64% of Americans favor a wealth tax (Ipsos) and 62% favor tuition-free universities (NBC).

Americans are also concerned about the growing conflict with China, a conflict which is manifested in the trade war and the dispute over responsibility for spreading the coronavirus. According to Pew Research, two-thirds of Americans (66%) have a negative opinion of China, and half or more are very concerned with China’s impact on the world’s environment, possible cyberattacks coming from China, the trade deficit and the loss of American jobs to China.

Finally, debate over individual principles (the cultural war that has been waged in American society for decades) will continue to have weight, especially for the base of each party. Abortion, the most representative topic in that debate, divides Americans along partisan lines. Democrats are much more prone to accept abortion in all, or almost all, cases (82% Democrats to 36% of Republicans). During his term, Trump’s administration has been a bastion of anti-abortion sentiment, as it has decreased the federal budget for abortion and backed the appointment of conservative judges. Biden, a Catholic, has abandoned his support for the Hyde Amendment, which limits the use of federal funds to finance abortion, as he seeks greater support from the Democratic base.

Circumstances and long-term goals are interwoven in the electoral agenda. Against a background of great uncertainty, the crisis is putting Trump’s leadership to the test, but it does not hide or postpone the debate by a society that is becoming aware of inequality, and which is divided over fundamental principles.