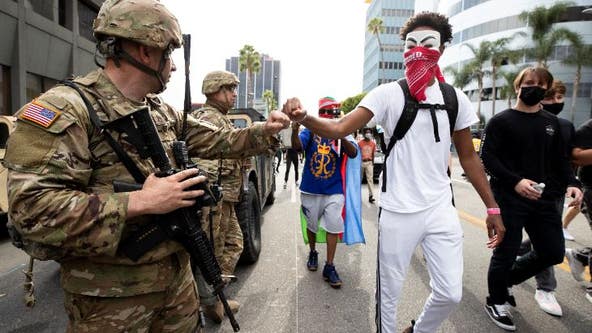 Both the current and the former secretaries of defense have voiced opposition to President Donald Trump’s threat to deploy the military against protesters, revealing the fragile state of American politics.

The good news: The U.S. military is standing against Donald Trump. Over the past few days, a great number of former generals have voiced their opinions – some appalled, some disgusted – criticizing the president’s threat to deploy the U.S. Army against protesters and rioters. It is safe to say that their reason for doing so is to give many active officers, unable to comment, a voice. The fact that Trump, in his typical style, now suddenly says he might not deploy troops after all shows how strong the opposition is.

On Wednesday, the protest reached the highest ranks. Secretary of Defense Mark Esper was the first to publicly oppose the president. In his opinion, the situation was far from being serious enough to warrant military intervention. His predecessor, James Mattis, a decorated former four-star U.S. Marine Corps general, added to Esper’s words with a scathing statement a few hours later, going beyond anything that has ever been said. Mattis described Trump’s threat as unconstitutional and immoral, and gaining momentum, went on to heavily criticize the president’s performance so far during his term in office. Trump has spent the last three years doing nothing more than dividing the nation and turning Americans against each other. The Nazis governed in such a way, too, Mattis wrote, and now that everything is exploding in his face, Trump was calling for the military. It became clear after reading his statement why Mattis was nicknamed “Mad Dog” during his term of service.

Esper, Mattis and the other former generals who disagree with Trump are right, of course. It would be a tragedy if American soldiers were used to shoot at American citizens just so Trump could show what a tough guy he is. No one can guarantee that if the situation became critical, a soldier could differentiate between a protester exercising his or her constitutional right to political assembly and freedom of speech and a rioter doing the same while throwing stones.

The riots and the looting that have shaken America since the death of George Floyd, an African American man, are criminal, dangerous and wrong. However, the situation is still far from being serious enough to justify deploying the military. The United States is not on the brink of collapse. In a democracy, it is the police force that is responsible for maintaining public order and restoring it – by force if necessary. Governors can activate the National Guard to support the police in particularly difficult situations. Using the U.S. Army against one’s own population is something that only monarchs, military juntas involved in a coup, and dictators are known for.

There is some further bad news, however: The U.S. military is standing against Trump. Just as the military in a democratic country should not take over the responsibilities of the police, military officers in a democratic country should not involve themselves in politics. Mattis and the other presidential critics are very aware of this fact. The fact that they obviously still think it’s necessary simply reveals the fragile state of American politics.

Yes, Democrats are making angry speeches. However, they are not in power. It should be the senators and representatives of the Republican Party who see it as their duty to defend America’s Constitution, America’s democracy and the lives of American citizens – even if this means having to speak out against the president. Republicans, however, have long since surrendered to Trump. Some members of the party are even urging the president to deploy troops. The others are turning a blind eye, too cowardly to say anything.

After 3 1/2 years of Trump, we are left with a bitter realization: The world’s oldest democracy needs saving by its soldiers from its own president.

About Zahra-Claire Bahrani-Peacock 18 Articles
I grew up in the UK, moved to Germany at 18 to study translation and interpreting, and then on to Spain after completing the course to deepen my knowledge of the Spanish language and culture. I (and consequently also my cat …) am now fluent in three languages and have dedicated the past two and a half years to language, translation and interpreting.