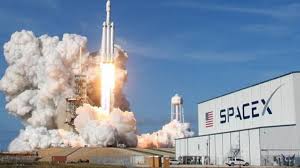 The name of the spacecraft Crew Dragon will go down in history. Its launch, planned for Saturday evening, will indeed alter the development of how we send people into space: Americans are ridding themselves of dependence on the Russians in the cosmos, private business is sending astronauts on its own ships and rockets, and the path beyond our planet is no longer financially out of reach. That is, if the second launch attempt is successful; the start of the mission was frustrated by weather on Wednesday. Lidovcky.cz will carry a live broadcast of the scheduled liftoff in the evening.*

In short, it’s a small revolution, even if sustained by a lengthy development, with the somewhat eccentric billionaire Elon Musk’s company SpaceX behind it.

This mission, called DM-2 for short, is boldly symbolic for Americans. Nearly nine years has passed since the final space shuttle was launched. The United States lost its ability to send human crews into orbit when the operation of this spacecraft ended. The country has had to employ the services of Russian Soyuz spacecraft to get to the International Space Station.

Those are reliable craft, but American dollars were flowing into the economy of another state, and thanks to its monopoly, the Russians were able to increase the price over the years – from an original cost of roughly $30 million per seat to the current price of around $92 million. In the case of the Crew Dragon, one seat is reported to cost about $55 million, but even more importantly for Americans, the money remains part of the U.S. economy and supports American firms employing American workers.

NASA as a Client

Another view of the launch is focused not so much on the U.S. as on astronautics as a whole.** This is the first time in history that a crew has gone into orbit on a vessel produced by a private firm. To put it more precisely: private firms manufactured them, but always on order from space agencies. Now the situation has changed. When the Crew Dragon sends astronauts to the space station, NASA will take on the role of a client purchasing a service from a private company.

It continues a trend that began several years ago when private firms began supplying the space station by means of space freighters. NASA evidently approved, because it is also counting on this concept for future projects. Private companies are expected to ship supplies and people to the surface of the moon. The important thing is that NASA here is playing the role of being one of the clients. Anyone else can also use the services of these private firms. Additionally, several months ago, SpaceX had already announced an agreement with two companies which want to use Crew Dragon for space tourism, whether it’s travel to the space station or a multi-day, free-flying orbit.

The spaceships of Crew Dragon underwent a long journey, during which proper functioning of all onboard systems were carefully verified – whether independently or in coordination with the rest of the ship. Special importance was attached to testing the parachutes, which SpaceX continually improved to be as flawless as possible.

The emergency system, which would remove the crew from an endangered rocket in the event of an accident, underwent hundreds of astatic ignitions, and was tested twice under demanding conditions. We might have seen the Crew Dragon last year, but the cabin used in a successful pilotless test mission was destroyed several weeks later during a test of the evacuation system’s engines. An investigation into the cause of the malfunction, accelerated production of a new craft, and the incorporation of design changes meant a delay of more than half a year.

Promise for the Future

One interesting thing about this mission is the crew itself, two American astronauts, Robert “Bob” Behnken, 49, and Douglas “Doug” Hurley, 53. Behnken will serve as the pilot on mission DM-2, the joint operations commander. He will be responsible for approach and docking with the space station, activities while connected to the station, and departure from the space station. He already has two space shuttle missions to his credit, during which he spent 28 days in orbit.

Hurley is the Crew Dragon’s commander. Responsibility for launch, splashdown, and pick-up of the crew falls on his shoulders. He has served on two shuttle missions and has spent 30 days in orbit. Even more intriguing is the fact that he flew on the very last shuttle, mission STS-135. That crew left an American flag behind on the space station with a clear message: only a future crew, launching from American soil to the space station could return the flag to earth. Hurley certainly had no idea nine years ago that he would collect this valuable artifact himself. While we’re at it, he probably didn’t expect the flag to remain at the station almost nine years.

Crew Dragon signifies promise for the future. Further space missions, space tourism, and, in the event that Musk’s visions are actually realized, further development and possible expeditions to the moon, or even to Mars, including the possibility that there could be, in line with Musk’s dreams, a permanent human colony there. How it turns out is in the stars, but in any case, the DM-2 mission is a small step in that very direction.

The author is an astronautics aficionado.

*Editor’s note: The Crew Dragon spacecraft was successfully launched into orbit on May 30.

**Editor’s note: Astronautics is the science that deals with spacecraft and with travel in outer space.