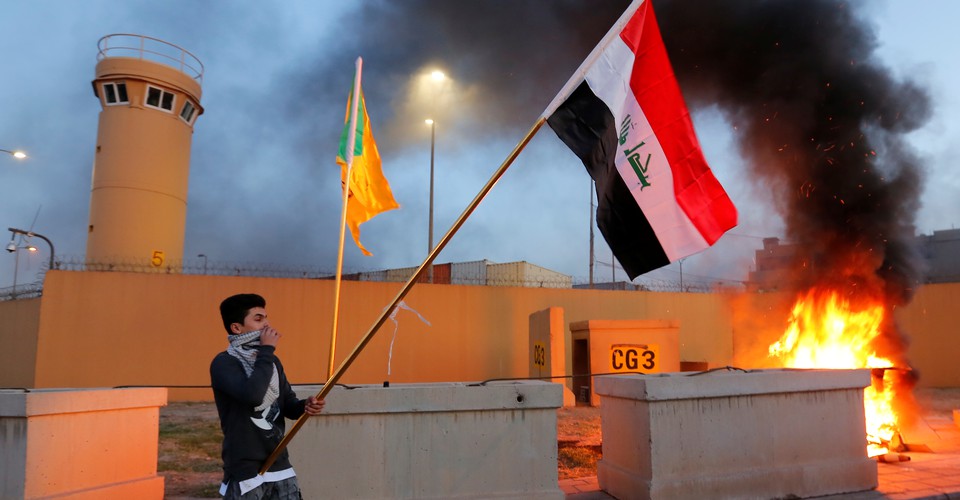 The Iraqi militia has now achieved the capability of a powerful army with support from the populace, religious authorities and political parties. Meanwhile, the American nightmare of remaining in Iraq continues, as the U.S. occupies and violates the sovereignty of that country.

According to Tasnim News Agency, when the United States deployed tens of thousands of troops in 2003, it occupied a large area of Iraqi territory under the pretext of disarming chemical and nuclear weapons of mass destruction, and implementing a greater Middle East initiative. During the next five years, the Iraqi resistance pushed American troops to the point that U.S. military officials pleaded with Gen. Qassem Soleimani and Iraqi officials to refrain from letting Iraqi militias target the column of soldiers and equipment convoys heading to Kuwait. At the time, some 120,000 American troops were motivated by and misleadingly preoccupied with a fight against terrorism which gained widespread support from the Iraqi international community. The odds were against the limited Iraqi resistance with its basic organization and equipment. The erosive and crushing war that killed or injured at least four Americans every day was an active two-year process that led the United States to flee Iraq.

Today, the Iraqi resistance is in a previously unimaginable situation in terms of morale, strength, equipment, widespread popular support and a great track record. In addition to widespread public support, Iraqis have ingrained in their memories to this day the images of killing, destruction and looting by Americans and the terrorist crimes that the Islamic State carried out against the people of Iraq and the region on behalf of the U.S., killing thousands of Iraqis. This has motivated the Iraqi resistance to redouble its efforts to seek punishment for the people responsible for the destruction, the killing, and the looting of Iraqi wealth.

At the same time the first negotiations were taking place between the U.S. and Iraq, a new kind of pessimism took hold on Iraqi society as the people saw little effort being made to expel the American terrorists. Ayatollah Seyyed Kazem Haeri, in a clear warning to Mustafa al-Kazemi’s government, considered the Iraqi people and the militia, backed by religious edict, to be the primary response to the U.S., and believed that this would replace the incompetence of al-Kazemi’s government.

In this regard, Muqtada al-Sadr’s warning about the need to expel American terrorists indicates a consensus among all Shiite groups in calling for the complete expulsion of American troops, and shows the determination of Shiite political groups acting alongside the Iraqi people and its militia. This potential tribal and partisan authority is so powerful that even the skeptical Kurds, who support the continued American military presence in the Kurdistan region, have reached agreement and solidarity with the strong-willed resistance.

The U.S. military presence in Iraq and the region, under the pretext of a struggle against terrorism, the Islamic State group and the maintenance of security, was more active three decades ago and has now faded, creating a threatening situation for all countries in the region. This has been clearly witnessed in Iran and Iraq with acts of terrorism and the martyrdoms of Gen. Soleimani and Abu Mahdi al-Muhandis. It means that any justification for the limited survival of these terrorist groups is also intolerable from the perspective of Iran, which considers the American military presence in Iraq to be a clear threat against Iran’s national security and regional stability, a view that was expressed by the Supreme Leader, Iran’s highest ranking official. In other words, given the will of the Iraqi resistance and the zealous Iraqi people, together with the assessment of Iran’s national security, the presence of the U.S. military is considered to be a common threat.

The Zionist regime will suffer the most after American troops are expelled from Iraq, and when relations with the Arab Gulf states are normalized, the deal of the century will disappear. The Zionist regime is now secretly bribing Arab countries to keep the U.S. in Iraq and the region. The Zionist regime is in the most precarious situation politically and with regard to security in all of its illegitimate history, and Benjamin Netanyahu is preparing for a fourth election and the defeat of a coalition government with Benny Gantz. It has lost U.S. and European support for the annexation of the West Bank and the Jordan Valley. As the main supporter of such colonialism, Donald Trump may be the loser in the presidential election.