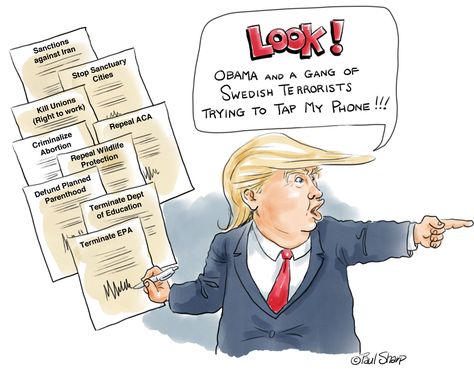 Different commentators and election campaign specialists like Charles P. Pierce of Esquire, or David Axelrod, Barack Obama’s senior adviser, have described Donald Trump as a kind of glistening object in the political sky. His flash pulverizes his adversaries and dazzles the spectators. He is an ever-moving star who bewilders the best observers.

We need to mention here that Donald Trump has not invented anything. He is using a diversion strategy that goes back to Sun Tzu, the great Chinese strategist of the 6th century B.C. This military tactic aims at fooling the enemy about your true intentions. Magicians call this approach “sleight of hand.” The basic objective is to deceive your audience by hiding certain maneuvers. For example, when the audience is concentrating on the magic wand, it does not not see that a rabbit is being slipped into a hat.

With Trump, this strategy is very simple: He makes you forget one controversy by creating another. By his untimely exits, his false accusations and his barefaced lies, he constantly draws the media’s attention. He provokes a real firework show. His management of the current pandemic is an extraordinary example of this reality. By doing this, he successfully draws the attention of journalists and the public away from the real questions.

This kind of management is not limited to the political domain. He acted this way as a businessman and as a celebrity in the series “The Apprentice.” Marketing strategists know this approach well; they call it the bright object syndrome. In any case, Trump’s emergence on the political scene was like that of a magician using magic tricks to distract his public and disguise his trickery.

This phenomenon is not new. Lyndon Johnson used it in 1964 against Barry Goldwater with the “Daisy” ad. By the way, in 1962 the great historian Daniel Boorstin had already written that the world was facing the dawn of trickery, when fake events were going to monopolize political debate. These pseudo-events have since become the drivers of election advertising. In 1988, for example, George H.W. Bush won the White House thanks to a false representation of Michael Dukakis’ prison parole policy by referring to the Willie Horton affair.

By concentrating on the bright object, you run the risk of transforming it into a real object. This is what happened in 2016 with Trump. His diversion tactic is very simple: All he needs to do is say something that is completely false, ridiculous, or bizarre to get the media rolling.

He makes headlines because the various media debate about the meaning of what he said and embark on trying to verify the remarks. Meanwhile, they stop covering the real issues or the questions that trouble Trump. This method works immediately, even if what he said is completely off the wall. Just think about his statements contradicting the medical experts on using Lysol or hydroxychloroquine to treat COVID-19. His conspiracy theories do the same thing.

For example, what has Trump found to distract the American public with in the last two months? The answer is simple. He has unceasingly declared that COVID-19 is no worse than a slight flu, that it would disappear in April and that the pandemic was nothing but a hoax perpetrated by the Democrats.

Yet, since then, the number of deaths in the United States has reached over 100,000. The United States set up a policy of confinement that has paralyzed the economy and forced more than 35 million Americans into collecting unemployment benefits. Worse yet, according to the Federal Reserve, economic recovery will take years to achieve.

The news is really very bad. Trump wants to be reelected next November. He cannot do this based on his poor performance. The only thing left for him is to throw mud at his opponent and distract the public by continually creating new controversies and acting like a buffoon to attract attention. In order to divert attention from an unprecedented fiasco, Trump has resorted to unleashing even more outlandish statements on Twitter.

On top of his statements about Lysol and hydroxychloroquine, Trump has created a whole pile of controversies. These run the gamut from making accusations against China, to firing four inspectors general, to the selling of arms in Taiwan, to various false accusations against Barack Obama, to refusing to invite Obama to the unveiling of Obama’s portrait, to alleging Joe Biden is senile, to accusing the Democrats of a plot to defraud the 2020 election with mail-in votes, to opposing the wearing of masks, to inciting right-wing movements to defend great American liberties, and so on.

Even if society begins to emerge from confinement, stirring up controversy remains fundamental for Trump. A simple return to normalcy, tarnished by tens of millions on unemployment, makes the president look bad. It is therefore essential for him to mobilize his base while trying to diminish the enthusiasm of his opponents.

In any case, Trump’s diversion strategy is not without consequences. His refusal to see the reality right in front of him and failure to face the pandemic is responsible for close to 100,000 deaths. According to American medical experts, simply authorizing and instituting a wide policy of confinement, as Anthony Fauci proposed before the end of February, would have saved at least 80% of the people who died. But Trump refused to approve such an approach until March 17.

On Nov. 3, American voters will have the choice of reinstating power to a public antagonist who leads them to ruin by sleight of hand, or electing a candidate who is able to restore dignity to the presidency.

Gilles Vandal is professor emeritus at the School of Applied Politics at the University of Sherbrooke.