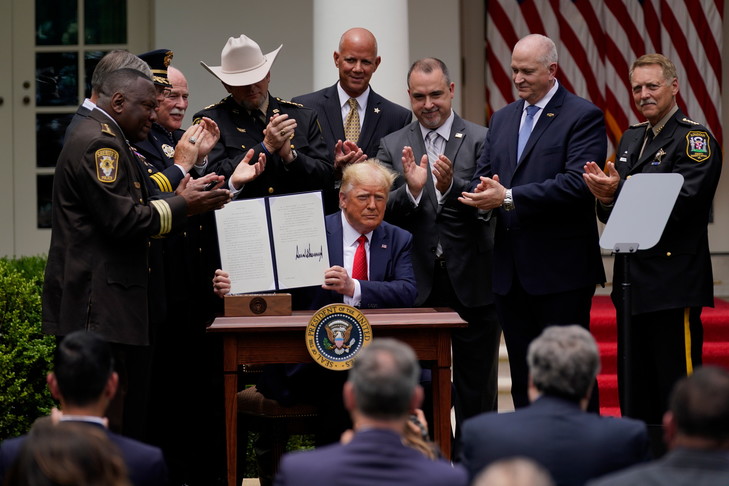 What Does the Order Anticipate?

Under pressure from negative polls, in which less than one-third of Americans believe Donald Trump’s response to the death of George Floyd was effective, the resident of the White House attempted to regain control on Tuesday, June 16, by signing an order aiming at American police reform. In the United States, the police do not answer to Washington; they act under local county and state jurisdiction. The country has approximately 18,000 police departments.

Donald Trump plans to act by using federal grants. The order signed on Tuesday demands that the Department of Justice impose new conditions on local police departments in order for them to benefit from this funding. It is not a question of imposing new measures, but rather encouraging police officers on the ground to respect the highest of professional norms, according to Trump.

Among the new conditions is a ban on chokeholds, except where an officer’s life is in danger, “policies and training regarding use-of-force and deescalation techniques,” and sharing information on officers suspected of bad practices.

What Reactions Elicited This Order?

If some saluted the speed with which the White House reacted, many more observers condemned the timidity of the executive order. For example, the president did not reactivate the policy often used by Bill Clinton and Barack Obama, which permits the Department of Justice to prosecute local police where there is systematic racism against minorities.

Trump was surrounded by people representing law and order forces when he signed the order, not by family members of victims who had met with him privately a bit earlier. In his remarks, Trump remained silent on the question of racism and mostly strived to defend the police. Only a “very tiny” number of officers are bad, he asserted.

“The White House offers symbolic impetus to reform police by issuing this order,” said essayist Didier Combeau. “The order mentions elements demanded by the proponents of reform, such as better training or the creation of database of offending officers. It is a step forward, but a small one.”

Where Does the Debate Stand in Congress?

In Washington, both the House and the Senate immediately engaged in sharing their own reflections concerning police reform. The Democrats, who hold the majority in the House of Representatives, are preparing an ambitious bill text that could be voted on as soon as next week.

The Republicans, who control the Senate, are working on a project that is similar to the president’s order. The matter was delegated to the only Black Republican senator, Tim Scott, who envisions a vote before the Independence Day holiday.

These two bills, as outlined, are very dissimilar. Yet a law cannot be passed unless both houses of Congress adopt its language. For the time being, Democratic and Republican leaders do not seem inclined to compromise.