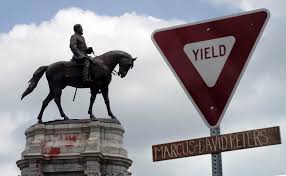 [Ed. Note: This is Part 2 of a two-part series entitled “Remove, Rename and Much More”]

So what about the statues that have been removed? Their place is in a museum where we might find not the statues themselves, (neither in their life-sized dimensions nor even in miniature, but in images), but the figures of each of the characters in question and others that people should also know, as well as figures of the national patriotic resistance fighters that fought against them, some of whom could also stand to be immortalized as statues. All this, of course, would be accompanied by learned, elaborate narratives and sufficient explanations of what each of these figures did. In these museums (there could be more than one, and in places of remembrance that historians could point out), there should be as many explanatory elements as possible of figures from the history of the slave trade and of colonization. This could include the slave ships that were mobilized, the expeditions that were undertaken, the practices that were in place at the time, the famous places involved in the slave trade, the names of resistance fighters who paid with their lives, etc., so that eventually, everyone would know who was who. In a way, they would be real stories carved in marble so that these historical tragedies would never be erased from memory. In short, history lessons belong in classrooms, in textbooks, and in the scientific activities of universities which, in an effort to transmit and popularize them, would involve teachers at all levels, beginning in preschool, where lessons have an indelible impact on the memory and imagination of young learners.

By resurrecting these tragedies in all their magnitude and impact, one should clearly indicate other facts, for example, the fact that before the discovery of America, all the gold that arrived in the West came from Africa, and that without the gold of the Ghana Empire, the history of the West would not have been the same. The fact that the United States would not be the same country today without the living forces torn from the African continent and enslaved on American soil. The history of African Americans consists of over 400 years of racial oppression in all forms. That count includes 246 years of slavery (1618-1865), 99 years of Jim Crow laws that governed institutional discrimination, an apartheid system exactly as it existed in South Africa (1865-1964), 86 years of lynching from 1882 to 1968 during which the bodies of Black people fell victim to the worst atrocities (they were stoned, tortured, hanged and even butchered and burned alive, etc.), and finally, 14 years of civil rights struggles from 1954 to 1968.

What other people could have lived and survived this much? The link between slavery and Western capitalism is direct and clearly established. It was the living force of Black people torn from the African continent who made the Industrial Revolution possible in Europe. Without this easy and accessible workforce over several centuries, there would not have been any sugar cane plantations or any industry at all, and therefore no Industrial Revolution. And without the cotton fields in America, there would never have been enough cotton to power the English textile industry. And so on.

There is no such thing as an innocent or neutral statue. A statue is a tool for glorifying and immortalizing a person, an ideology, a certain conception of history. One honors someone by creating a statue of that person. A tyrant who imposes his own statue on the streets of his country glorifies himself, just as an oppressive country glorifies its own figures with statues. It is the hypocrisy of Western republican universalism that led one to approve and rejoice in the toppling of Saddam Hussein’s statue in the streets of Baghdad a few years ago in the wake of the fall of the former Iraqi president, all the while wishing to leave the statues of figures just as despotic and tyrannical, such as Faidherbe and all the others, intact in the public squares of our cities.

The very fact that people have raised their voices in France, moved by the removal of the Faidherbe statue in Saint Louis in Senegal, is one of the manifestations of racism. Because beyond discriminatory practices based on racial identity in ordinary life, beyond the sporadic eruptions and outbreaks of the phenomenon, racism also exists in the desire to stifle the “other’s” voice (literally stifle, as with George Floyd and the murderous police officer, and figuratively stifle, as with Cheikh Anta Diop and his luminous and enlightened works on “the anteriority of Negro civilizations” that the former colonial powers always sought to discredit and ridicule), to try to prevent the “other” from speaking about his condition in his own name. Racism exists in the inability to put oneself in the “other’s” place, to see one’s own human reflection in the “other’s” face (the face of a different race). Racism exists in discrediting the “other’s” actions, in refusing the “other” the right to defend himself by rewriting his own history as a way to find peace with the story the oppressor has written about him. All in all, it is to deny the “other” his humanity. Racism also exists in trivializing a tragic fact that the historical oppressor would prefer to see as simply an unfortunate accident or an isolated case, an event that should be delegated to oblivion. Didn’t the former colonial power question the drama of Thiaroye 44*, the place of Gorée** in the slave trade, etc.?

History is fluid. People are not inert. Our people have the right to demand that the names of any historical figure be erased from our streets, erased from the arteries of our cities and all of our public buildings; for these names to appear only in history books, and that that same history that remains to be written does not obscure any aspect (especially not the less than glorious parts of these countries) of its past with our people. It is an aberration to give the name of a fighter, a liberator, a great political or religious figure in the history of the nation to one street, and to another, the name of the one who existed simultaneously only to oppress him, someone who would have wanted to eliminate him, someone who would have acted like Derek Chauvin pressing his knee, no matter what, unscrupulously and without hesitation, against George Floyd’s throat until Floyd’s last breath. The oppressor and the liberator are both historical figures, but they are diametrically opposed to each other. Giving the name of an individual to a street or to a building necessarily honors, celebrates, glorifies and immortalizes him. History is not taught on the streets. This is why we must rename places and remove the statues of all the figures in history who are unworthy of serving as geographical landmarks in the life of our societies, and, you should pardon the expression, “confine” the accounts of their actions to history books!

* Translator note: The Thiaroye massacre was the massacre of a number of French West African troops, shot by French forces on the nights of Nov. 30, 1944 to Dec. 1, 1944, at the Thiaroye camp on the outskirts of Dakar, Senegal.

** Translator note: Gorée is an island and part of the city of Dakar, Senegal, which is known as the location of the House of Slaves, and thought to have been heavily involved in the slave trade.

Abou Bakr Moreau is a teacher and researcher of American Studies at the University Cheikh Anta Diop of Dakar.