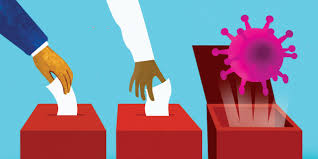 With the presidential election only three months away and President Trump’s campaign struggling, what will be his trump card?

Although there is a possibility that the ‘October surprise’ will be a third U.S.-North Korea summit, people in Washington consistently predict that it will be a COVID-19 vaccine. If the development of a vaccine is successful, there is a possibility that the controversy over Donald Trump’s failure to contain COVID-19 could be forgotten, and he could instead be remembered favorably as the president who stopped COVID-19. A COVID-19 vaccine is the best card Trump could play in turning his election prospects around as dramatically as the COVID-19 outbreak has shaken his bid for reelection.

The Trump camp even went so far as to compare the vaccine to the Holy Grail. Jared Kushner, Trump’s son-in-law and White House senior adviser who in large part oversees the Trump camp, regularly attends a vaccine development supervisory committee, and The New York Times reported that White House officials have continuously mentioned October during committee meetings. In an Aug. 2 teleconference with his supporters, President Trump also said “we expect to have a vaccine available very, very early, before the end of the year,” and that “many vaccine candidates are in the final phase of clinical trials,” inflating expectations.

However, there is significant concern that these expectations could put pressure on the Food and Drug Administration, leading to the hasty approval of a vaccine. Realistically, having a vaccine ready by October is impossible, but there could be emergency approval of a restricted vaccine. University of Pennsylvania Professor Paul Offit, who serves on the Food and Drug Administration’s vaccine advisory board, said, “You don’t want the administration to … pull out one or more vaccines and say, ‘look, it’s been tested in a few thousand people, we know it induces an immune response without knowing whether or not it’s effective’, and then putting it out into the American public.”

Vaccines have to go through a much more rigorous approval process than regular medications. This is because the vaccine’s safety has to be proved as much as its medicinal effect. Because large numbers of the otherwise healthy general public are vaccinated, the vaccine’s side effects on certain groups of people must be carefully documented. One Washington pharmacist said that “even if Trump announces that the vaccine was a success, I will not be administering it for a while.”* Will Trump rush the approval of a vaccine that directly correlates to the health of national citizens because of the political schedule? This may be a baseless fear, but it is possible for someone like President Trump.

*Editor’s note: Although accurately translated, the quoted remark could not be independently verified.