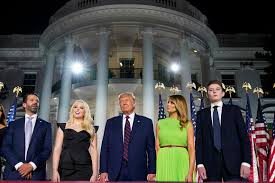 Donald Trump delivers his party conference speech like he did in 2016, but today the signs are very different; the president has to defend his own ruined landscape. In the end, one image in particular sticks out.

When Donald Trump was first crowned the Republican Party’s presidential candidate, a key phrase in his acceptance speech was “I alone can fix it.” As depicted by Trump, America in the summer of 2016 was a ruined landscape that was the fault of his opponent Hillary Clinton and the outgoing Democratic administration, and he, the outsider, was the only one who could clear the rubble and restore the country to its former greatness. It was infinitely presumptuous and incorrect, but served as a clear message in the election campaign.

This time, the starting position is a lot more difficult for Trump, and the message he conveyed in his latest convention speech was far less clear. Today the president is facing his very own ruined landscape. The U.S. is mourning 180,000 COVID-19 deaths and facing an economic crisis with millions unemployed. it is confronted with protests against police violence, which once again turned into rioting. The U.S. is a country stretched to the breaking point, and two-thirds of its residents say the country is moving in the wrong direction.

Trump is a gifted salesman, or one could also say, propagandist. One who, at the expense of U.S. taxpayers, has misused the symbols of presidential power for his own election campaigns, placing Trump posters on the White House lawn and setting off Trump fireworks over the Washington Monument. But even Trump is struggling to sell his own statements. Perhaps that was the reason why the president’s speech on Thursday evening was surprisingly long and incoherent, and full of contradictions.

Those who watched Trump’s performance, including the introductory program, could not really tell whether the U.S. was now in such a bad state that only reelecting Trump could save it from ruin. Trump conveyed this impression when he spoke in gloomy tones about the violence running rampant in America’s cities. Or was the U.S. doing better than ever before in its history, so well that Americans can’t help but vote for Trump again, which is how Trump sounded like when he recounted his achievements.

The problem for him is this: Most of these successes occurred during the first three years of his term, most of all, the good economy. He had significantly less to say about the fourth year of his presidency, the one overshadowed by the COVID-19 pandemic. Trump, using hair-raising distortions of fact (“We focus on the science and the facts”), tried to gloss over his administration’s crisis management, which a majority of Americans have deemed a failure.

But what remained of this performance by Trump were not his words or his attack on his Democratic opponent, Joe Biden. What remained was the image of nearly 2,000 Trump supporters, huddled chair to chair on the lawn of the White House amid a pandemic, most of them without a mask. There it was finally, the clear message, and it summed up Trump’s presidency pretty well: The rules only exist for others.