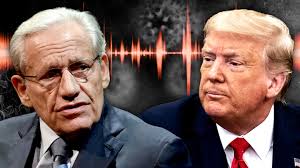 The U.S. president knew how dangerous the pandemic was and downplayed it. This revelation by a reporter helps the Democrats. But the Republicans know how to fight back.

And once again the question everyone asks after each new revelation, what does it mean? For Donald Trump, for his reelection? In the past few weeks alone four books about the president have come out, written by his niece, his former attorney, a New York Times reporter, and now Bob Woodward, the legendary reporter whose book “Rage” comes out in a few days. The publication of these books always follows the same pattern: Newspapers report about the first excerpts. The story dominates the headlines for a day or two. The author gives TV interviews. Then everyone turns to the next outrage.

It’s easy to understand why. Much of what is in these books is quite shocking and none of it sheds any good light on the president, but these books paint nothing new about him either. Trump may continue to suppress his tax returns, but in other respects, he is more transparent than any of his predecessors. Those who really want to learn that the White House is occupied by a man with a problematic character and that chaos and incompetence characterize his administration have already known this for some time now. It is on public display every day.

Perhaps that is the best explanation for why most exposés have a half-life of just a few days. Will Woodward’s second book about Trump be any different?

There are some indications that it will. This time it is not about some insult that Trump thought up for his opponents; it is less about which dictator Trump showered with praise or which of Trump’s secretaries are secretly appalled at what is happening in the White House — although all of this is present in Woodward’s book, too.

This time it is about the subject that overshadows everything else in this election year: the coronavirus pandemic that has caused the deaths of nearly 200,000 people — more than in any other country. The United States is still in the grip of the virus, and even though the number of cases is declining, around 37,000 people are still becoming infected every day.

At the heart of Woodward’s book is Trump’s admission that he already knew how dangerous the virus was, but downplayed the risk for a long time. “This is deadly stuff,” Trump told Woodward. “You just breathe the air and that’s how it’s passed. And so that’s a very tricky one. That’s a very delicate one. It’s also more deadly than even your strenuous flus.”

That remark came on Feb. 7 in one of the first of 18 recorded interviews Woodward conducted with Trump for his book. Publicly, Trump spoke quite differently. The virus was no worse than the ordinary flu; it would soon disappear again. He repeated this message at every opportunity, at the five campaign appearances he made in the spring, in TV interviews and at White House events. Trump justified this to Woodward. “I wanted to always play it down. I still like playing it down, because I don’t want to create a panic.”

One could put this another way: Trump lied to the American people. That’s the way presidential candidate Joe Biden sees it. “It was a life or death betrayal of the American people,” Biden tweeted. He called Trump’s behavior “almost criminal,” a dereliction of duty which tens of thousands of Americans paid for with their lives. “It’s … a disgrace.”

There is no doubt. Woodward’s book is a gift for Biden and his Democrats. For a long time now, they have been concentrating their campaign on Trump’s failure to manage the pandemic — on the fact that there were no tests and no national strategy for so long. Now Woodward has provided support.

This issue also involves the excerpts from the tapes that the Watergate reporter has already shared with the press. This time it is not anonymous sources incriminating Trump; it is also not second- or third-hand information. It is Trump himself. A few hours after the buzz from push notifications about the disclosures, the president’s quoted remarks were already part of political ads distributed by the Lincoln Project, an increasingly vitriolic group of Republicans opposed to Trump. It will not stop at their videos.

The outrage will not die away as quickly as it has in previous matters. But will it change anything? Will it cost Trump votes now when many states have already mailed out ballots? That is a completely different question.

In the conservative media, on Fox News and in the widespread coverage on right-leaning internet sites, reports about Woodward’s book consist of two arguments. First, there was no contradiction between Trump’s public statements and that of the health experts in his administration. Even the experts were reassuring in the early stages and advising against wearing masks.

On Wednesday, Trump’s campaign team distributed a TV interview with Anthony Fauci, in which the immunologist appeared distressed as he said, “I didn’t get any sense that he was distorting anything … And when he would go out, I’d hear him discussing the same sort of things.” The second argument is that the president acted completely properly when he tried to keep Americans from panicking. That’s what any government would do; it’s only reasonable.

However, what they fail to mention is that Trump’s health experts changed their approach and emphatically called for social distancing and wearing masks after a few weeks. Moreover, Trump hardly ever fell in line with these appeals; more often than not he publicly questioned them. They likewise don’t mention that Trump is keen about stirring up panic over many other issues. When he is campaigning, he talks about extreme left-leaning gangs who are burning down America’s cities and will soon lay waste to the suburbs. “Fear is his total motive,” The Washington Post editorialized.* We won’t know until November what Woodward’s revelations mean for Trump’s reelection.

*Editor’s note: Although accurately translated, the quoted remark could not be independently verified.