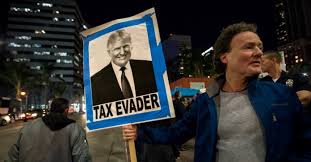 Benjamin Franklin once famously said that “in this world nothing can be said to be certain, except death and taxes.” However, the richest people in America are able to use a series of legal methods and proper avenues to avoid taxes, and this is considered perfectly normal, even customary. Recently, The New York Times’ report on the fact that Donald Trump evaded taxes for many years sparked a wave of serious debate in America; it also drew the world’s attention to the problem of tax evasion in the U.S.

The U.S. actually uses a system of progressive taxation: the higher your income, the more you are taxed. Although there are some exceptions to this system, generally speaking, if you exceed a certain income bracket, you must pay taxes. However, the super rich in America are never taxed at a very high rate because they often use legal ways to avoid paying such taxes. This issue has only become more serious in recent years. In 2019, University of California Berkeley economists Emmanuel Saez and Gabriel Zuckerman found that in 2018, the 300 richest families in America were taxed at a rate of 23% on average. This is about the same as the rate at which the bottom half American families are taxed at 24.2% of their income. In contrast, the actual tax rate for the “400 richest people” in the United States in 1980 (as reported by Forbes Magazine) was 47%. In 1950, the rate was as high as 70%, while the effective tax rate of the bottom half has hardly changed over time.

The American upper class have various tools for evading taxes, some of which appear harmless.

One tool involves reporting huge business losses, a method which is exploited by many among the American upper class. They take advantage of huge losses when they calculate their business revenue, which not only exempts them from paying a single year’s worth of taxes but also taxes for the next few years. The New York Times reported that Trump’s business records showed continuous losses.

An important means of regulating income distribution, taxation plays a very important role in closing the income gap. The tax evasion practices of the rich have definitely led to inequality in the United States in terms of taxation, something which is also reflected in the widening income distribution gap. According to a survey conducted by the U.S. Census Bureau, the Gini coefficient in the U.S. was 0.48 in 2018, a record high. Income inequality reached its highest level in more than 50 years.*

Some people describe the history of taxation in the United States as a struggle between those who want to tax the rich and those who want to protect their wealth. And the results? Efficient tax evasion. Today’s wealthy Americans pay less in taxes than in the past, but this is also much less than they should pay. American society needs to think about this.

*Editor’s note: The Gini coefficient is a measure of the distribution of income across a population developed by the Italian statistician Corrado Gini in 1912.

About Enshia Li 15 Articles
I am a sophomore majoring in English Literature and East Asian Studies at Stanford University. I was born in Shandong, China, but have since lived in three other countries—Pakistan, Canada, and now the United States!