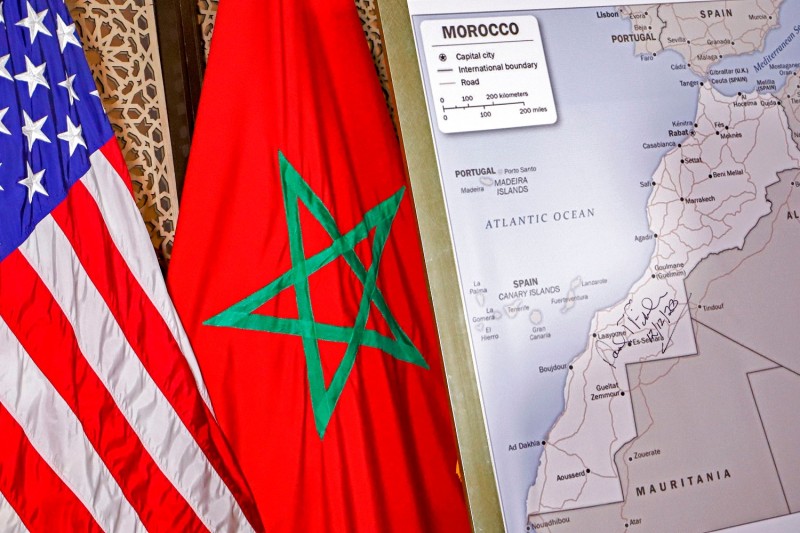 The recognition is part of the agreement between Israel and Morocco to establish diplomatic relations. The U.S. will open a consulate in the disputed territory, which includes the former Spanish colony. The U.S. president announced that Rabat’s autonomy proposal is the only possible solution for the Sahara.

The United States has recognized Morocco’s sovereignty over the Western Sahara. This concession has worked to set the stage for the negotiated agreement by Washington between Israel and Morocco for the establishment of diplomatic relations. The announcement was made on Thursday via social media by President Donald Trump, who will leave the White House having rebuilt the Middle East map with four standardization agreements, opening the Arab world to a Jewish state. Recognition of Moroccan sovereignty over the Sahara, which was formally rejected by the United Nations and much of the international community, will include opening an American consulate in Dajla, the second-largest city in the disputed territory, which encompasses the former Spanish colony.

“Today, I signed a proclamation recognizing Moroccan sovereignty over the Western Sahara,” Trump tweeted. “Morocco’s serious, credible, and realistic autonomy proposal is the ONLY basis for a just and lasting solution for enduring peace and prosperity!”

The American leader recalled that Morocco was the first country in the world to recognize U.S. independence in 1777, a little more than a year after its proclamation in Philadelphia. “It is thus fitting we recognize their sovereignty over the Western Sahara.”

Nearly 20 African and Arab nations currently have consulates in Dajla or El Aaiún, which symbolizes an implied recognition of Moroccan sovereignty over the disputed territory. Just a few weeks ago, Haiti became the first American country to follow in their footsteps. On the other hand, more than 80 countries have recognized the Sahrawi Arab Democratic Republic, which was self-proclaimed in 1976. This came just one day after Spain’s withdrawal from Western Sahara — after the events that followed the Green March orchestrated by Hassan II. But that independence never came to fruition. After the Moroccan occupation of the Sahara that followed Spanish decolonization, Rabat formally annexed the territory in 1979 and has since managed it as if it were part of the kingdom.

Trump’s maneuver, which has already done something similar by recognizing Jerusalem as the capital of Israel while turning its back on international law, quickly sparked an international reaction. Spain’s Foreign Minister Arantxa González Laya “welcomed” the standardization agreement between Israel and Morocco, but called for respect for U.N. resolutions to resolve both the Saharan and Palestinian issues. “In both cases, Spain’s stance on the matter is very clear with respect to the U.N.’s resolutions for finding a way to solve those two issues,” the minister said.

For decades, the U.N. has promoted a referendum to solve the Saharan conflict, which never took place because of the lack of agreement between Morocco and the Polisario Front on voter registration. “The general secretary’s stance remains unchanged,” said Antonio Guterres’ spokesman, reported Idoya Noain. “He firmly believes that it is possible to find a solution to the Western Sahara problem based on Security Council resolutions.” Both the Spanish minister and Guterres’ spokesman claimed to have heard about the U.S. decision on Twitter.

The return of normal relations between Israel and Morocco comes after the United Arab Emirates, Bahrain and Sudan reached similar agreements with the Jewish state in the last four months. All the agreements were negotiated by Jared Kushner, Trump’s son-in-law, and the special envoy for international negotiations, Avi Berkowitz. They managed to bury the old taboos that made any Arab to Israel rapprochement dependent on the resolution of the Palestinian conflict. Such a cause has been utterly neglected after part of the Arab world preferred forming a common front with Israel against Iran and buying an insurance policy in the U.S., where the voices questioning Washington’s tyranny and illegitimate alliances with the Arab regimes are growing.

Furthermore, Morocco has a remarkable Jewish heritage and established informal relations with Israel after signing the Oslo Accords in the early 1990s, which were later suspended following the second intifada outbreak. Even so, both countries have escaped the hostility the Jewish state creates in other nations in the region, as evidenced by the fact that some 50,000 Israelis travel to Morocco each year to explore their family ties with the North African country.