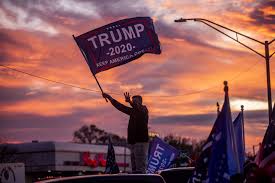 It’s game over for Donald Trump. But the president of the United States is struggling to let go. Just yesterday, this warmonger called for a march on Capitol Hill to set the members of Congress straight. We saw the result: chaos and incredible images of costumed crackpots, of dangerous fascists invading the symbol of American democracy. Didier Combeau, professor and United States expert, takes stock.

We feared violent demonstrations during the presidential election; ultimately, they took place during the Senate session to certify the election. Was what happened on Wednesday, Jan. 6 in front of the Capitol in Washington predictable?

Didier Combeau: This is something completely new and extraordinary. It is not a coup d’état as people have speculated, but a power grab by the most determined militant Donald Trump supporters. Trump has steadily added fuel to the fire. His remarks calling on supporters to return home peacefully, while all the while he says he loves them, is not a condemnation of this uprising. Even his call for calm is ambiguous.

From the images on American news channels, there did not seem to be that many demonstrators. Can you waltz into the Capitol (home of the United States Congress) that easily?

There surely were some shortcomings in terms of securing the Capitol, but just like the Supreme Court, it is quite easy to gain entry to these institutions. This is part of the concept of American democracy. The police undoubtedly wanted to avoid any incidents. What happened is bad enough, as a Trump rioter was killed inside the building. Other deaths were reported to have occurred outside the riot, and the reports remain to be clarified. As for the number of rioters, it is true that there was not a huge crowd, which is fortunate. A poll shows that nearly four out of 10 Americans have doubts about the integrity of the presidential election. In short, they think it was rigged.

Yet Trump recently encouraged his vice president to rig the election.

Yes, Trump has denied reality until the end. He has even worked against his own camp, which is only beginning to mark their distance. For example, two Senate seats were up for election in Georgia. The Republican candidates could have focused their campaign on the importance of retaining Republican opposition in the Senate, the last line of defense against the concentration of power in the hands of Joe Biden. But, because Trump failed to concede his defeat, it was difficult for the incumbent Republican candidates to campaign, and eventually they lost their places in the Senate. And now Biden’s Democratic Party has the majority with the two Senate seats going to Democrats.

Without Trump, what will become of the Trumpists?

That is the question! Can the Republican Party represent voters recruited from the evangelist camp, the ultra-Catholic camp and those left behind by society, and do so in a less divisive way than Trump did? The lower class white men left behind by society believe that a multiracial American society no longer represents them.

American society is increasingly divided among minorities: African Americans, Latinos, who will soon be a majority in the U.S., and those who feel left out, white people in depressed regions or areas that have lost industries, men who often have little education and feel that Blacks and Latinos get everything and they get nothing.

Is that a feeling or a reality? Can we really say that the lot of Black people and Latinos is desirable in the United States?

It’s not easy to be Black or Latino, but the Democratic Party is no longer Franklin Roosevelt’s party, which spoke to the popular class. It is now very much about addressing communities, and there is a general atmosphere, in intellectual circles at least, that favors the struggle for minority rights. The government has enacted policies to promote employment and fight discrimination against these minority groups. However, Trump voters believe that granting rights to these minorities comes at the expense of their own interests. We should understand that the United States does not know class struggle. The racial question is both the unifying and dividing factor in the country. Before Trump, white men who reject multiculturalism were not much represented. Trump can step down, disappear from politics, as he finally seems to accept his loss. But the Trumpists will not magically disappear.