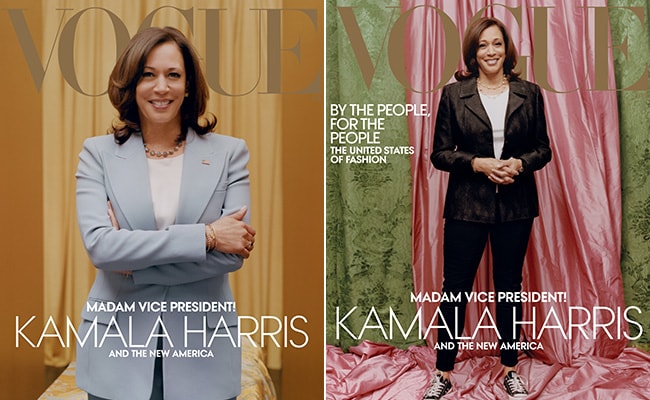 A witticism circulated in New York during the lifetime of Susan Sontag: Of course she’s a beautiful woman, but she always looks like as if she were in the process of renovating her apartment and just stepped out to get another bucket of paint. Those were the 1970s and 1980s. Glamour was camp, and camp was glamour. Humor existed as well. A great, strikingly intelligent woman with an austere and expansive mind could wear loose pants and sport a mullet. And still be an iconic figure, a human being with sex, intellect and reflected emotion. With political engagement.

That was way back. Maybe Hillary Clinton has regrets regarding her 1998 Vogue cover on which the first lady was styled in a plain Jane fashion — a meek smile on the blond maiden’s face, wearing a long, black velvet gown while resting modestly on a dark red sofa, an opulent rose bouquet as a classy companion. In any case, the message was clear: Fellow citizens, don’t be afraid that I’m going to use my brain. Or even try to wield influence. I’m tame. That message was neither true nor effective, but Clinton had made an effort.

And who knows why Michelle Obama — just as smart, educated and ambitious as Clinton — on her three cover pictures for Vogue more than a decade later, posed as a woman who’d be remembered mostly for her manicure, well-toned biceps and impressive robes? Maybe the first Black first lady of the United States was supposed to symbolize both at the same time — Eros and control, hedonism and discipline.

In both cases, with Obama as well as Clinton, the parties involved decided on a style that carefully avoided any kind of individuality. No indication of what was important to these women, no insignia of power. Not even a book in sight, but instead: flowers, cushy furniture, Western bourgeois wealth. Anonymous glamour.

The portraits should be iconic and impersonal at the same time, and this way they became a philistine, trite and clenched effort. The woman at the pinnacle of her life: a smiling styling product, without origin and traces. A compliant result through real effort. A falcon in the luxury aviary.

Now Kamala Harris has met the Vogue fate. Not as the first lady, but as the designated vice president. The first woman to hold this position and a non-white one at that. There are two cover photos of her for the current issue (one for the print, one for the online version) and they are — rightfully — being criticized as really pathetic, especially in social media. Not “respectful” is one essential point of the criticism; the editorial team should have made more of an effort. They weren’t glamorous enough.

It’s true; they really aren’t glamorous. The vice president on the cover of the magazine is depicted as the boss of a furniture store telling her customers: You can’t go wrong if you purchase your curtains here. We provide quality only. A well-kept brand ambassador for wellness products greets us on the Vogue website; this entire wasteland in pale blue (blazer), caramel and beige (curtains in the background) would be ideal for an upscale drugstore magazine.

What is the real issue though? That there’s no “wow factor”?

Maybe it’s a step in the right direction that the editorial team of this iconic style magazine could not come up with anything besides a pastel-colored frame for this powerful, charismatic, non-white woman.

The societal contradictions are so deep-rooted that they cause a kind of creative rigidity. Style, power and femininity, work and a type of policy aiming at a somewhat democratic collaboration, without pomp and pride — apparently there is no cohesive image for this combination. One could be upset about this. Or relieved. It’s the aesthetic evidence of a reasonable perplexity.

About Lasse Christiansen 44 Articles
I am a translator and localization specialist who loves to work with languages and communication in all shapes and forms. I lived in Canada for several years and recently returned to my home country Germany. During my time abroad I was fortunate to have worked with several exciting, globally acting companies from different industries. I am passionate about what I do and am always looking for opportunities to expand my expertise.