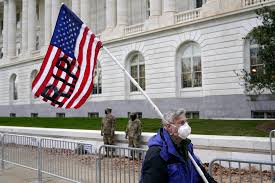 Igor Zevelev on what awaits the United States after the storming of the Capitol.

The Trumpists’ desperate protests, which escalated into a riot and storming of the Capitol, led to the consolidation of the American ruling class. Irreconcilable political opponents — Democrats and Republicans — looked into the abyss and were horrified. They retreated and closed ranks. The interrupted session of Congress continued after just a few hours, and the Electoral College vote was approved. The most influential Republicans, including Vice President Mike Pence and Senate Republican leader Mitch McConnell, refused to audit the election results and strongly condemned the actions of the crowd and attempts to “undermine democracy.”

One might get the impression that Trump and Trumpism are completely discredited, the country is returning to normalcy and integrity, as promised by Joe Biden. And the events that rocked America will soon fade, after which the public attention will turn to the inauguration of President-elect Biden, as well as new Washington intrigues that do not question the foundations of political order.

However, to think so is extremely misleading.

A significant part of American society is now left completely without representation in U.S. political institutions. Its voice, not heard in the mainstream media for a long time, has been blocked on the most popular social media platforms.

Meanwhile, by branding the rioters terrorists and refusing to engage in dialogue with them, politicians are making a serious mistake. After the insurrection, the “humiliated and insulted” felt especially acutely that they had no place in the modern political system. These are mostly white Americans with no college education living in small and medium-sized cities and rural areas. Populist Trump, who blamed the Washington establishment for all the troubles of ordinary Americans, has, de facto, already managed to include these people in his future electoral alliance. After all, today they have nobody to rely on within the regular political process.

The social and political marginalization of the poorly educated white Americans in the country’s hinterland, accelerated by the recent events in Washington, can have very unpleasant consequences for the entire American society.

The radicalization of the “non-systemic opposition” is possible.

The surveillance of potential “domestic terrorists” will inevitably affect peaceful citizens as well. There may be a much more dangerous demagogue than Trump, who will try to draw all the disaffected toward him.

These processes are especially alarming given the extreme polarization of opinions on virtually all issues.

According to the reliable think tank Pew Research Center, 80% of Americans “fundamentally disagree” on “core American values and goals” with fellow citizens voting for “the other side.”

The Capitol has always been a symbol of America as the biblical “City upon a Hill.”

It cannot be said that its radiance has now faded. The political system has undeniably stood the test. However, at the beginning of the new decade, cracks in the social foundation were clearly visible.

If they deepen, the building will shudder. And an abyss may open under it.

About Nikita Gubankov 44 Articles
Originally from St. Petersburg, Russia, I am currently a student at University College London, UK, studying for an MSc in Translation Technology. My interests include history, current affairs and languages. I am a keen translator from Russian into English and vice-versa, and I also translate from Spanish into English.