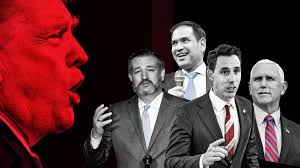 Donald Trump’s presidency infected the country with rage and misinformation. Five years of lies – if we count the lies from the 2016 campaign – have erased the boundaries between reality and falsehood, between science and fanaticism. Trump’s second impeachment has brought the bad news that the Democrats are unable to make their case outside their own ideological waters. No matter how violent and televised the Jan. 6 assault on Congress was, it still seems like fiction. This is not a good omen for Joe Biden’s presidency, and bodes even worse for American democracy. Trumpism is still alive and it is dangerous.

The America that dominates the prevailing debate in politics and journalism is divided into two irreconcilable blocs, and there are no bridges or bridge builders. After listening to the arguments for conviction, Republicans called it one side’s version of events, claiming the other side’s version of events had not been heard, establishing a confusing equivalence between the attack and the defense of democracy.

A Trump supporter would declare that the Democrats never had a case, that they presented edited images and presidential tweets, but no evidence to prove beyond a reasonable doubt that Trump was involved in the assault. And deep down, they are right. When facts vanish from politics, it all boils down to a leap of faith.

Democrats argue that, first, Trump attempted to overturn the election results, and then he incited a coup. Republicans are eager to move on so as not to stoke the anger of their already enraged base. Their congressional seats are not the only thing on the line; their personal safety is, too. Hatred has been out of the bottle for years now, and there are no vaccines for this illness, only history books to jog the memory.

The images of the attack, some of which were new and shocking, showed how close the mob came to the vice president as they chanted “Hang Mike Pence” only minutes earlier. Every senator was able to recount the fear as he or she fled to a safe location. The United States did not project the image of a superpower, but that of a vulnerable and violent country. The FBI consider the white supremacist groups that attacked the Capitol to be more violent than foreign terrorists.

Trump may be silenced on social media, having seemingly disappeared as he broods in Florida. However, three months of post-election tremors have left their mark on his followers. A recent Quinnipiac University poll shows that 76% of those who identify as Republican contend that there was widespread election fraud. The worst part is that 25% of independents claim the same thing. Nearly a month has gone by since the inauguration of Biden and Kamala Harris, and passions are still unwavering.

The former president retains formidable influence over Republican voters. They embody the America that is resentful, that feels betrayed, and that no longer trusts institutions. They are white, have limited education and little technological training in the face of current change. They are losers who will buy into any hoax that assures them the blame lies elsewhere. Both the groups that attacked the Capitol and the groups that were established during the last few years are as mute as Trump. But don’t be fooled, it’s an optical illusion.

The possibility that another coup could take place when the right political moment presents itself is still alive. A gesture on the part of Trump would suffice as he is likely to return to the spotlight soon, or a young, charismatic leader may appear, a Fox News anchor like Tucker Carlson who is willing to tarnish the political scene even further. Changing the score will take years of work. Impeachment proved that the Democrats have set their sights on the short term.

Regaining Control of the House

The Republican Party’s only goal is to regain control of the House of Representatives, which is up for reelection in two years, and control of the third of the Senate necessary in order to get ready for taking the White House back in 2024. This objective comes before anything else, even if that something else is the rule of law.

In 2022, the seats of 20 of the 50 Republican senators who attended the impeachment trial will be at stake. This includes Marco Rubio. Hotheaded Sens. Ted Cruz (from Texas, so he is up for reelection in 2024) and Josh Hawley (from Missouri, also up for reelection in 2024) are confident that Trump donors and supporters will catapult them into the presidency; the new Trumps. The far right is bound to get as crowded as the ship’s cabin in a Marx Brothers’ movie.