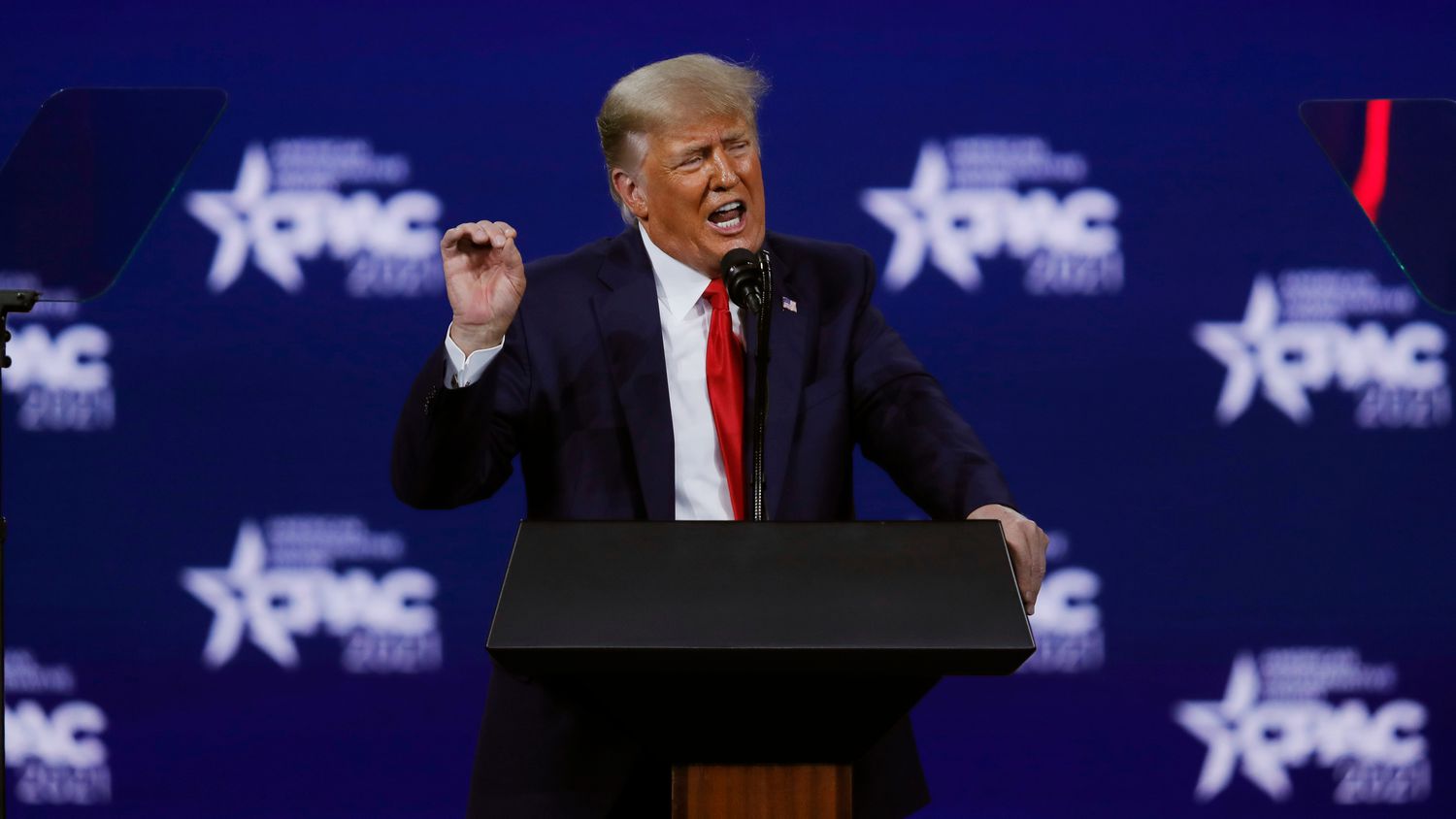 The former president participated in a conservative political conference and gave the first speech since his turbulent departure from the White House, saying, “This election was rigged, and the Supreme Court and other courts didn’t want to do anything about it.”

Donald Trump reappeared Sunday for the first time since his turbulent departure from the White House and pushed his claim to the Republican throne, once again spreading unfounded accusations of voter fraud. Two months after the bloody attack on the Capitol by a mob which was energized by these rumors, and recently acquitted by the Senate for inciting insurrection, the former president was once again playing with fire. “We have a very sick and corrupt electoral process that must be fixed immediately. This election was rigged, and the Supreme Court and other courts didn’t want to do anything about it,” Trump said on his return to the public view, delivering the closing speech of the Conservative Political Action Conference. The great annual conclave of the American conservative movement, held in Orlando, Florida, displayed the power that the New York businessman holds over his base.

The nearly 90-minute speech was expected to be a form of claim to the Republican Party’s leadership, very much fractured by the Capitol invasion, but it was much more than that. Trump arrogantly claimed for himself the brand of the Grand Old Party and the voice of its future, without fear of lighting the same dynamite that led to his second impeachment, the unfounded accusations of voter fraud. The public gathered at the event responded by crying out, “You won. You won.” The former president, who had remained quiet about the subject since the Capitol riot, responded, “We did.”

Trump clarified that he would not create a third party in response to such rumors, and did not make it clear if he plans to run for president again in 2024, but in Orlando last Sunday, it was clear that he would keep his role, without renouncing the incendiary rhetoric. “I stand before you today to declare that the incredible journey we’ve begun together, we went through a journey like nobody else. There’s never been a journey like it. There’s never been a journey so successful. We began it together four years ago, and it is far from being over. We’ve just started,” he stated.

The first CPAC took place in 1974, and sought to energize conservatives after the Watergate scandal. That event served to reactivate right-wing elements of the party and launch Ronald Reagan’s national career after he delivered the keynote speech. Since then, the conference has become a sort of annual checkup of the conservative movement and a showcase for future Republican presidents. In 2016, it had already exposed the division caused by Trump; the 2021 CPAC showed that this inexhaustible 74-year-old businessman continues to be the dominating voice in the party, even if he decides not to run in 2024.

His detractors were absent from the conversation, and his allies monopolized the debates. In a poll taken of conference’s participants, 55% said Trump was their favorite to lead the next Republican presidential ticket. As soon as he got the microphone he asked, “Do you miss me yet?” The public cried out yes spontaneously, but the real answer is more complex. In that same poll, only 68% of those interviewed thought that Trump should run for the White House in 2024, a good example of the ambivalence among Republicans.

His defeat at the polls, the Capitol attack and the impeachment divided the party between those that repudiate Trump and want a new model for the future, and those that support him and see him as a true representation of what voters feel. Last Sunday, Trump denied the main rumors. “The Republican Party is united. The only division is between a handful of Washington, D.C., establishment political hacks, and everybody else all over the country,” he said. In other words, it’s him and the people against a handful of enemy leaders. “And then, a Republican president will make a triumphant return to the White House. And I wonder who that will be? I wonder who that will be?” he said many times throughout the night, flirting with the crowd.

The speech seemed like a rally. He walked onstage, preceded by his official campaign anthem, the country song “God Bless the USA,” and attacked the Joe Biden administration with full force. “We all knew that the Biden administration was going to be bad. But none of us even imagined just how bad they would be and how far left they would go … In just one short month, we have gone from America first to America last. You think about it, right? America last,” he attacked. He accused the Democratic president, who proposed to naturalize the nearly 11 million immigrants in the U.S. without documentation, of promoting “amnesty for millions of illegal aliens,” and of ruining the borders.

Immigration monopolized a good part of his long speech, a sign that that card will continue to be played over the next few years. He also highlighted the “socialist” wave that, according to him, is being imposed by the Democrats. However, the core matter during the three-day conference in Florida was not immigration or socialism; it was which model of Republican would be able to win future elections.

Despite having been defeated, the New York real estate magnate received 74.2 million votes on Nov. 3, an 11 million increase from 2016, or one percentage point in relative terms. Nevertheless, if Trump’s control over the party and his base is evident, the reaction and repudiation he generates among Democrats is also evident. Within two years, and with Trump in the White House, the Republicans lost control of the House of Representatives, the Senate and the presidency. These are the two faces of the coin that Republican Party chiefs are considering when looking at the 2024 presidential election, and before that, the 2022 midterm elections.

Trump’s character was as omnipresent over those three days, and not only because of the golden sculpture that dominated photographs of the event, as was the absence of his adversaries and former allies. Many high-ranking Republicans did not attend, including former Vice President Mike Pence, senator and former presidential candidate Mitt Romney and Senate Republican leader Mitch McConnell. Also not present were media star Rep. Liz Cheney or Nikki Haley, the former U.S. ambassador to the U.N. There definitely weren’t any of the most relevant voices who distanced themselves from the former president, and in some cases even voted in favor of his impeachment and conviction. Those that participated and made speeches included his son Donald Jr., Donald Jr.’s girlfriend, Kimberly Guilfoyle, and a long list of allies who used the meet to praise Trump’s governmental feats and reiterate rumors of voter fraud.

There has already been much discussion about Trump’s hypothetical return as a presidential candidate in 2024. He left the door open, and one way or another, has already decided he will be the dominant voice in the future, acting at least as a guardian of future candidates, and no potential newcomers will want to be his enemy. An eloquent display of his influence was seen in recent statements made by McConnell to the conservative Fox news channel. The veteran senator, one of the most powerful figures in the party, voted to acquit Trump during the impeachment trial, but criticized him over the bloody Capitol attack: “There is no question, none, that Trump is practically and morally responsible for provoking the events of the day,” he said on the day of the trial vote. Nevertheless, when asked on Friday if he would support Trump in the event he won the Republican primaries, McConnell answered, “absolutely.”

During the weeks Trump has spent at his Florida retreat since leaving the White House on Jan. 20, Republican Party Chairwoman Ronna McDaniel, South Carolina Sen. Lindsey Graham, one of his greatest allies in Congress, and a number of associates stopped by his Mar-a-Lago mansion. From his post-presidency office, Trump organized an entire structure with which he plans to launch a new political action committee, a vehicle used to generate funds, combined with the existing Save America PAC. “He likes how he’s been sought out recently by people who want his support. During the time I was there, up to 10 people called him asking for that,” Graham told The Washington Post.* The senator said that he mentioned to the president how his personal behavior and management of the pandemic hurt his position, but added that he could recover by facing real political debate over issues such as immigration. This Sunday was only an appetizer for what’s to come.