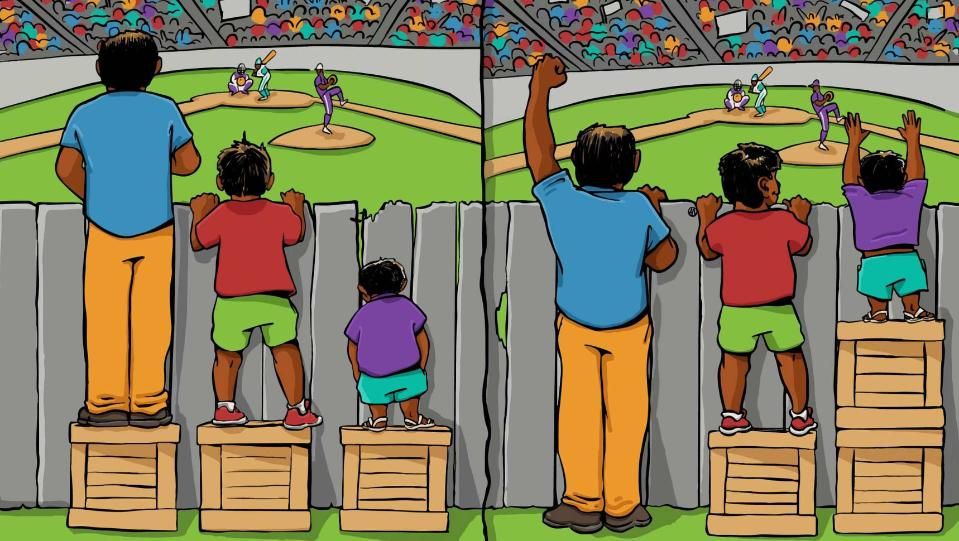 We have all seen this picture, which is widely used on social media to explain the difference between “equality” and “justice.” Racial equity has become a particularly popular term in the last month since Joe Biden and Co. declared themselves to be “fair” in every sphere of society. It’s nice, but only on paper. In reality, it is scary. Let me explain what this is about.

Liberals say this picture illustrates the need not for equality, but for justice. If we are equal, we all get one box to stand on, but that is not enough for some who need two boxes to be equal to others. That is why justice is needed — the tallest person does not take a box, and the shortest person takes two boxes. Sounds very nice, right?

But life is not a picture with boxes. This image simplifies a complex question presented in such a basic way that what is actually presented ceases to have anything to do with the thing that is intended to be presented. First, in life, inequalities are not about who is tall and by how much. We can’t take the measuring tape and say, here are two boxes for you, and that will make life fair. Second, this type of “justice” aims to annihilate the differences between people. One cannot be able to do more than another person, liberals say. The goal of liberal “justice” is to have no differences among people, so that there is no “injustice.”

In Bulgaria, we remember what this ideology was called 30 years ago or so. People have not seen socialism in America, and accept it idealistically. But in essence, the type of “justice” that the new Washington administration is looking for is just that — equality not at the start, but at the finish. We all need to have equal results, we do not have to have an equal start in life; who will go far and by how much depends on the individual. Liberals take the idea of personal freedom and throw it in the garbage, then replace it with an “equal result for justice.”

In general, the new government in Washington, and hence its proxies around the world, have introduced a modern reading of the socialist idea, and dressed it in new “democratic” clothes. The truth is that there is nothing democratic about this; taking from some and giving to others is a laudable Robin Hood tactic, but one that only happens in fairy tales. In real life, this idea crashes head-on with the objective impossibility of people being equal in what results they achieve. People are different. And that’s wonderful!

Some can do a great deal, others just a little; some work a great deal, others just a little; some are active, others are not. This does not mean that some people are better than others — all people are born equal in terms of dignity and rights, says the wise native Bulgarian constitution. Wise because it declares equality from the beginning, that we are equal at birth. The specifics and differences follow. Alas, in recent years the liberals have thrown the ideas of Martin Luther King Jr. and Nelson Mandela in the garbage and replaced them with the extremism of antifa and Black Lives Matter.

In Kurt Vonnegut’s short story, “Harrison Bergeron,” in the distant future, America has appointed a “Handicapper General” to ensure that the laws of equality are enforced. Stronger individuals are forced to carry weights, taller people walk in a squat, the more beautiful people wear threatening masks, and smarter people listen to loud, confusing noise from a headset every 20 seconds, gear which they are obliged to wear at all times. As a result, everyone is equal — no one is smarter, richer, more talented or more successful. Everyone is equal. Here is your “justice.”

This action does not take place in the distant future.