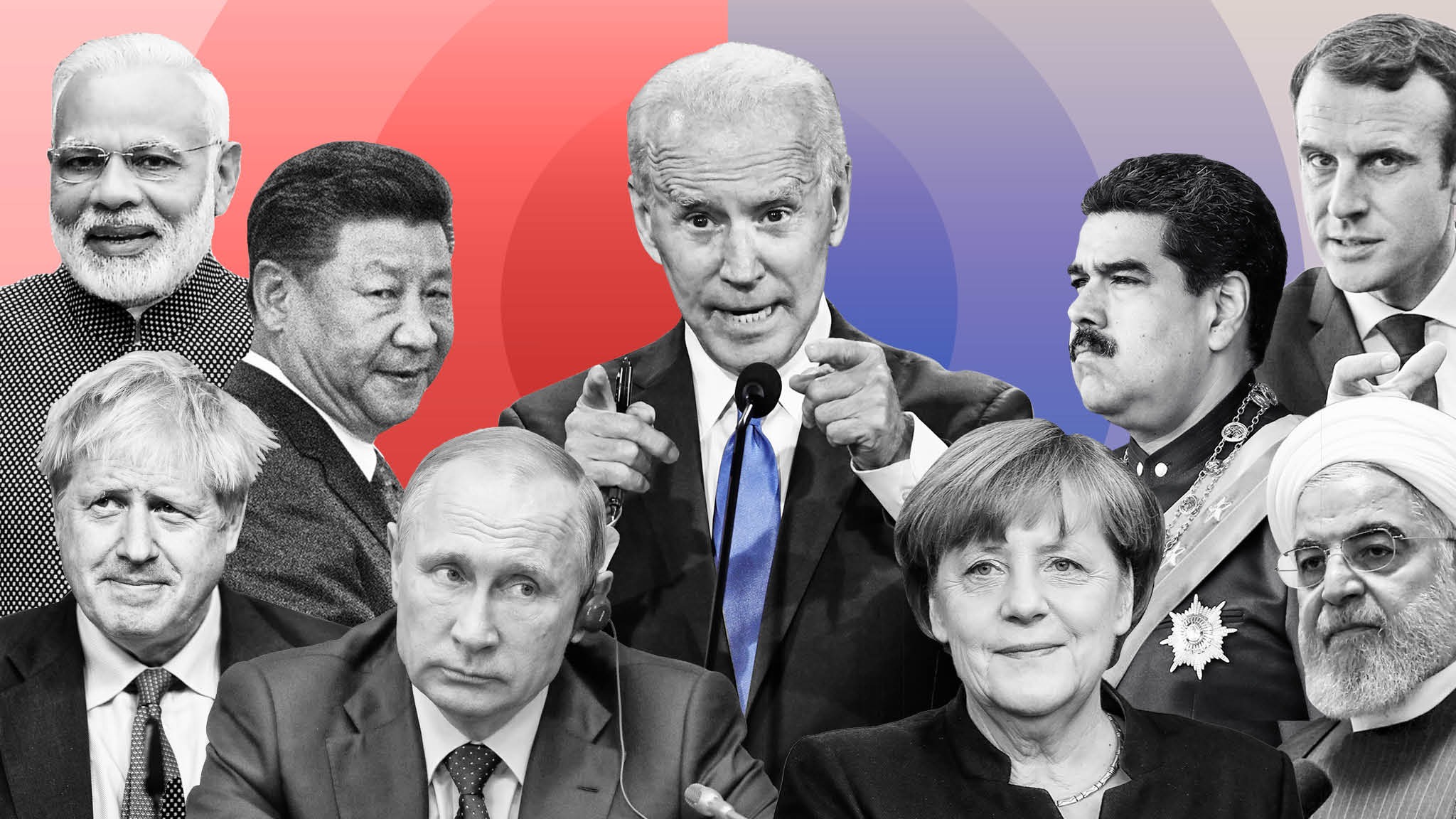 Almost everything Sullivan said was a variation of dogmas well known to the whole world. For example, the United States will act “from a position of strength.” Sullivan also mentioned points specific to the Democrats’ program, such as the importance of the Paris Agreement, and reasonable considerations like the idea that Americans need to restore order in their country, which would be a good foundation for international efforts of any kind.

But the main thesis was the assertion that the job of Washington’s foreign policy is to achieve a state of affairs in which the “United States is writing the rules,” and not anyone else – for example, China. And although we have been hearing about the “rules” with which the West replaced international law in the 1990s-2000s for a long time, something new sounded in Sullivan’s words. Once, Barack Obama spoke of a “world based on rules” as an accomplished fact, a ready-made structure built once and for all.

Now Obama’s former subordinate says that the rules will be written by the U.S. So, first, this is an ongoing process, and second, the right to establish such rules is still contested. By China, for example. With some effort, one can discern some signs of realism in this concept – American hegemony today is not as obvious as in the past. At the same time, the strategic goal is clear – to maintain U.S. control over major world process. In particular, over the financial system, the international division of labor, the main trade routes and geopolitically important regions of the planet.

Part of this task is supposed to be solved by building an “alliance of democracies” loyal to the U.S. global leadership. If this succeeds, the rift in the West will end, and impressive financial, technological and military resources will be under one management. Some allies, including allies in Europe, will have to be left outside the alliance, not to mention the fact that the second edition of globalization will have to be built without China. But the discipline in the new bloc will be ironclad. And this will force many countries that annoy Washington with their disobedience to change their behavior.

Many, but not all. What to do with those who disobey is still unclear. The failure of the U.S.-China summit in Anchorage, Alaska, and the three-day pandemonium around the project of deescalation with Russia (pandemonium that may not yet be over) suggests that the real American competitors are in no hurry to play by American rules, like listening to the lectures of Washington politicians or retreating if the U.S. raises the stakes. The White House will definitely make similar attempts to put pressure on Beijing and Moscow and other “unreasonable” capitals. But it is clear that it has neither reliable tools for forcing the growing centers of power to obey, nor the technology for starting a dialogue.

Another governing pillar of the world order, as conceived by the liberal Western elite, should be climate policy. More precisely, the concept of man-made climate change. If a certain Washington authority forms the agenda on this issue, it will get the opportunity to orchestrate industrial and agricultural policies of entire continents. And such a body already exists – a special commission headed by John Kerry, the former U.S. secretary of state and now the U.S. special presidential envoy for climate.

This commission has already calculated and set the social price for greenhouse gas emissions by individual states and industries in the U.S., including the agricultural sector and even the maintenance of individual households. The algorithm for calculating the cost has not been presented to the general public, but the numbers already exist, and the corresponding “debts” can be claimed at any time from those states and business structures that behave incorrectly in the U.S. domestic political sphere.

What prevents the U.S. from spreading this “technology” to the whole world? As it turned out at the Leaders Summit on Climate chaired by the U.S., many things stand in the way. Many countries are developing tailor-made response strategies, aligning with the very concept of climate change. Even the extremely servile European Union managed to approve its own initiative in this area a couple of days before the summit. On the eve of the forum, Washington had to conclude a separate agreement with China, which is competing with the U.S. for first place in terms of greenhouse gas emissions. The text of the document has not yet been published and, apparently, will remain confidential for a long time, but importantly, this is a bilateral agreement, not a global rule.

Vladimir Putin also paid special attention to climate issues in his address to the Federal Assembly. Here, in my opinion, two aspects are important: (a) Russia has its own, sovereign plan to cleanse industry of carbon emissions; and (b) a clear understanding that climate will still change, so the country’s industry, infrastructure and housing services should be prepared for such a change. In general, the main task of the Washington establishment – to subordinate the development programs of the countries participating in the climate summit to a certain global program – remained unfulfilled.

How will Washington fulfill its strategic mission? How is the liberal establishment in the West going to maintain control of international rules? One gets the impression that the strategy remains without the tactical tools needed to implement it. It seems that this is the whole point. Global leadership has a good strategy, but it is at a tactical dead end. In this position, U.S. persistence in pursuing its goals is like the desire to cross the abyss in two jumps. Washington politicians have found themselves in an unenviable situation. And there are at least four reasons for this.

First, the American liberal establishment is still captive to the concept of “sole power,” according to which there have been no centers of influence in the world since 1992 capable of not only opposing the United States and the united West, but of carrying out independent development in their own macro-regions without Washington’s approval. This is what former Presidents George H.W. Bush and Bill Clinton thought. Much later, in 2014, former President Barack Obama provided a mild formulation of this thesis as follows: “When trouble comes up anywhere in the world, they don’t call Beijing, they don’t call Moscow. They call us.”

But it’s not 1992 or 2014. And the power corridors in Washington are still filled with the same people. Sometimes they are the disciples and successors of the people who determined foreign policy in those years; sometimes they are just the same people. Like Antony Blinken, Sullivan, Kerry or Susan Rice. They did not have time to come up with anything new. It still seems to them that they are in a world where there is only one force capable of settling all the problems in the world. And when someone does not give in, they are sincerely surprised. For them, this is some kind of new phenomenon, which they have not encountered and which they are not yet able to explain and understand.

Second, all of the people who make up the Biden administration and run the U.S. federal departments today planned to continue their rising careers in 2017, rather than become the opposition to Donald Trump. Four years outside of power for them was an extremely annoying turn of events. The current White House team has been called both the third Obama administration and the fifth Clinton administration. And they were supposed to become Hillary Clinton’s first administration. After the 2020 election, Kerry, Sullivan, Blinken, Rice, etc., began where they left off. Psychologically, they are still living in 2017, not 2021. Much has changed in four years, and radically so, but Biden’s administration has no other starting point. They were not taught to work in an environment where no one is listening to America.

Third, these people feel that they are the only legitimate authorities in the “shining city on the hill” and in the West as a whole. Meanwhile, the question of power has not yet been resolved. Perhaps the liberal elite, which toppled Trump and strangled several populist governments in Europe, is being reasonable in considering its victory as final, but the world is not sure about this. And these doubts represent an objective view. Of course, the Democratic Party, leading the worldwide anti-populist counteroffensive, has a plan to clear the political field in the West, but where is the guarantee that this plan will be successfully implemented?

For most countries that have no chance of joining the supposed “alliance of democracies,” the West does not seem to be a monolith that emerged in the 20th century, but a place where left-liberal politicians in practice carry out a revolution, seeking to reprogram the West at the deepest level.

Moscow, Beijing, New Delhi and the voters of many Western countries are not dealing with a U.S. political elite that has returned to normalcy, but one with radical reformers, whose victory is not so obvious. Who will guarantee that in five to seven years France, Germany, the U.S., Britain, etc. will not be led by leaders with completely different cultural and geopolitical attitudes? Where is the guarantee that the cold civil war in the West will not continue for a couple of decades? And why, then, adapt to the current “rule-makers”?

Finally, there is no “alliance of democracies” yet. This is just a plan, which, even according to its authors, has been set aside until the end of 2021. Whether or not it will work out is a big question. The current U.S. administration is acting as if the alliance has already been formed and the most brutal idiosyncratic discipline has been established within it. But this is not yet the case. And whether it will be the case is unknown. Perhaps coups d’états, civil wars and election surprises await the West. (Fortunately, they are experts at staging the former.) And then, maybe some new Trump, some new Matteo Salvini will appear.

All of this does not mean, of course, that Washington will soon ease its pressure, abandon its pursuit of hegemony and generally behave decently. Quite the opposite. Under current conditions, one should expect the most unexpected, illogical and, therefore, dangerous actions from the unstable liberal elite. Maybe if everything were stable there now, the West would be less aggressive and more predictable.

The tactical impasse between Washington and its allies is no reason to rejoice. It is a reason for even greater vigilance. At least for another 20 years.

About Nikita Gubankov 39 Articles
Originally from St. Petersburg, Russia, I am currently a student at University College London, UK, studying for an MSc in Translation Technology. My interests include history, current affairs and languages. I am a keen translator from Russian into English and vice-versa, and I also translate from Spanish into English.