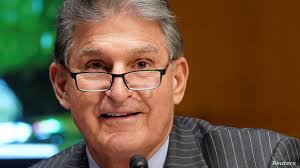 Due to the split in the Senate, Sen. Joe Manchin is in a position to define key projects.

Everything in a democracy is done to prevent the concentration of power in the hands of a single person or institution. Therefore, and among other reasons, it is interesting to see how fate and the ballot boxes transformed West Virginia Sen. Joe Manchin into a heavyweight on the scales: If he says no, some of President Joe Biden’s most ambitious projects will go down the drain.

Manchin, a good-natured, colorful politician who campaigned by shooting down bills he considered harmful, has already nay-sayed giving statehood to Washington, D.C.

This should at least be decided by Congress. If it wishes to amend the Constitution, he said, it has to be done by a constitutional amendment that America can vote on.

Manchin’s party colleagues want the District of Columbia to become a state because it would help break the deadlock that currently exists — a 50-50 split in the Senate among Democrats and Republicans — and this would potentially alter the balance of power.

The deciding vote currently falls to Vice President Kamala Harris. However, here is where Manchin’s unexpected power will be felt: If he steps back, the project collapses.

District of Columbia voters are so Democratic that it would virtually guarantee that Biden’s party would always have two additional senators. Remember, Biden received 94% of the D.C. vote in last year’s election, while Donald Trump received a mere 5.4%.

The gigantic public infrastructure projects Biden has proposed will also have to pass the scrutiny of the only man capable of complicating approval of these projects. And the West Virginia senator, from a mainly Republican state, isn’t very enthusiastic.

“It’s a lot of money, a lot of money. That makes you very uncomfortable,” was his comment on the new $1.8 trillion plan for child care, education and paid leave Biden proposed in his speech to Congress.

What politician doesn’t like a money tree? Only a kind of guy like Manchin, a centrist politician worried about the increase in the stratospheric American public debt, which is already at $28 trillion, $7 trillion more than the American gross domestic product.

Manchin was not such a rare bird in Congress, but the Democratic Party’s swing to the left turned him into a kind of relic from a not-too-distant past. Biden himself was the incarnation of centrism — so much so, that Barack Obama made him his vice president to reassure voters there wouldn’t be eany excessive liberalism.

Now, Biden is leaving Obama behind. He vetoed the large pipeline that would bring oil from Canada, he enthusiastically embraced the green economy, he will raise taxes on companies and individuals with higher incomes, and is proposing social programs no one even dreamed of during the Obama administration.

“The fate of Biden’s massive spending plans, and the future of America, may be decided on an innocuous looking houseboat several miles away from the U.S. Capitol,” The Telegraph somewhat exaggerated.

Manchin, who at 73 still retains his stout quarterback physique — a career interrupted while at West Virginia University due to an injury — lives on a houseboat anchored in the Potomac and regularly invites colleagues from both parties aboard, another rarity of the recent past. He serves pizza and beer while cruising the river.

Trump “was always calling” Manchin, and the senator’s name was even considered for deputy secretary of the U.S. Department of Energy — but Manchin quickly announced he wasn’t joining Trump’s cabinet. Manchin was also disappointed by Trump’s penchant for cultivating conflict and unrest.

“He liked conflicts and he liked that turmoil. And that’s fine if you’re in business. But for public service, it doesn’t work,” concluded Manchin.

Was the Democratic senator living in a world that no longer exists, where the two parties could find common ground?

Republicans are proposing an infrastructure investment program of “just” $568 billion, as an alternative to Biden’s $1.8 trillion plan.

Manchin — an anglicized form of the Italian name Mancini — is certainly taking the alternative into consideration.

He also has said that he accepts at most a 25% tax rate increase for companies. Biden wants to raise taxes from 21% to 28%.

“He should want to get rid of the filibuster because he suddenly becomes the most powerful person in this place — he’s the 50th vote on everything,” as Democratic Sen. Chris Coons sized up Manchin.

And, obviously, one of the most targeted. Trade unions and corporate lobbies delight in the prospect of sealing trillion-dollar public contracts with the government, and so they lobby Manchin via radio, television and the internet. Conservative groups with the same interests do the same.

Manchin is currently at center stage, and progressive adversaries are holding back. When he said he would not vote for Neera Tanden, whom Biden nominated to serve as director of the Office of Management and Budget, the president discreetly withdrew the nomination of the activist, who is also the director of one of George Soros’ institutes as well as a forthright tweeter.

Biden, with four decades in the Senate and a lot of experience in his back pocket, understands that fighting with Manchin now would be self-destructive. But there isn’t much time for standing still. Next year there will be legislative midterm elections; history dictates that the party that owns the White House always loses Congress in the middle of a presidential term.

Manchin will certainly feel the pressure in the coming months of being the most powerful man you’ve never heard of.