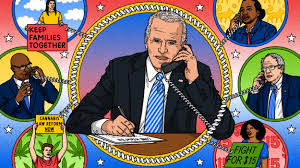 Has Joe Biden, the president of the United States, turned communist now that there is freedom in Madrid? Who would have expected that of an almost 80-year-old man, who has spent 40 years in politics defending the system, believing in the value of the free market and the benefits of business? It certainly generates a lot of questions. It’s not that he supports the temporary suspension of patents for the COVID-19 vaccine; it’s also that he intends to raise taxes for those who make over $400,000 per year. In other words, the very wealthy. And, he’s insisting that Google, Amazon, Apple, Facebook and other tech revolution giants pay federal taxes rather than dodge them. His fiscal revolution includes the creation of a worldwide tariff for multinational corporations to help lessen the pandemic’s impact — an idea shared by the main economic institutions.

There are already cries of outrage against the announced waiver of patents, which will be slow and complex. Pharmacies responsible for creating the vaccines — which are as powerful as tobacco and petroleum companies were when they defended their businesses over health and the environment — will be among them. We must remember that the United States invested 90 million euros toward the research and development of these vaccines. Are they considering relinquishing the profits? Will they be excluded from compensation? The vaccine’s release has been anticipated for months; it’s the only way to fight COVID-19 on a planetary scale. India has been the detonator — the demonstration that a single country can turn into a hotbed for new strains, ruining a year’s worth of work.

It has only been three and a half months since Biden took over, and it seems like we’re living in a new world — although we can’t tell if it’s a world from before or after Trumpism. Biden has raised the refugee quota, a vague term that might include immigrants fighting to enter the U.S. This cheap and undocumented labor — which the country needs to function — was Trump’s battleground, just like the unaccompanied foreign minors in Spain. Hate always finds the weak — those who don’t have a voice.

Biden’s foreign policy has returned to the Atlantic channel and to aggression against Vladimir Putin, whom he deemed a “killer” in an interview — an inappropriate slip-up for a man with such experience. Is the Russian president more criminal than some of United States’ allies in the Middle East? Under Biden’s leadership, the U.S. has returned to the Paris Agreement on climate change. His administration has placed this issue at the center of his duties and has promised to cut down on CO2 emissions, as well as increase the amount of electric vehicles within the next 10 years.

This triumphant return to the Barack Obama era includes the reinstatement of the Iranian nuclear deal, which was demolished by Trump. But it won’t be easy; there are also signs that the future is uniting with the present. Based on the CIA’s predictions 20 years ago, China is no longer a vague threat with whom we would collide in 2050. It has already replaced Russia as the second global superpower, and soon it will be in the right condition to confront the U.S. on the battlefield.

Trump seems like part of a distant past, a nightmare in which, upon waking up, we are not quite sure what we just dreamt. We should not deceive ourselves. He continues spreading rumors of the vengeance he will produce in the 2022 midterm elections, and perhaps the 2024 presidential election.

The Republicans are stuck in the myth that the Georgia and Arizona elections were stolen from them. The fall of Liz Cheney — daughter of the secretary of defense* who invented reasons to invade Iraq — demonstrates that Trumpism does not forgive betrayal or nuance. She was one of the Republican Party’s few national leaders who remained loyal to the facts and to the Constitution.

Biden has an unobstructed path until November 2022, the date that the Democrats could lose control of one or both congressional houses: the House of Representatives, which will be completely renewed, and the Senate, one-third of which will be renewed. There will also be state elections, which will be key in controlling the outcome in 2024.

The president must quickly lay down his agenda. He knows that the economy will rule. It needs strong growth and some degree of prosperity as we exit the pandemic. It’s a psychological battle in which perceptions are essential; people must perceive that there’s hope. If he salvages the 2022 threat, he will have two more years to bury the Trumpist cycle. Be pessimistic.

*Editor’s Note: Dick Cheney was secretary of defense during the tenure of President George H.W. Bush (for 1989-1993), and George W. Bush’s vice president.