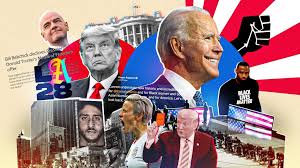 On April 28, 100 days after entering the White House and taking the helm of the United States of America, President Joe Biden delivered a speech before Congress. In this first speech to Congress, Biden shed light on several major issues of concern for the American people. Among them is the spread of COVID-19 at the national and international levels, and the efforts of his administration to combat and confront it. He also outlined his policy on the U.S. relationship with China, which he wants to be an honest competition between the two countries. Biden does not want any confrontation or raging conflict that would make losers of everyone. Furthermore, he presented a very ambitious program to spend trillions of dollars to modernize and develop the infrastructure of the U.S, a program which would kill two birds with one stone: It would get the economy moving after the stagnation of COVID-19; at the same time, it would create jobs lost due to the pandemic while combating climate change, the looming issue in the modern world

During his speech, Biden elaborated on America’s longest war: the invasion and occupation of Afghanistan for more than 20 years. He described this fierce war as “multi-generational,” as several generations of Americans have participated in this seemingly never-ending fight with the terrorists behind the 9/11 attacks. In addition, he addressed the very important fact that international terrorist networks are now moving beyond Afghanistan.

However, he also warned that white supremacist groups pose a greater threat than foreign groups. The president said, “Make no mistake. In 20 years, terrorism has metastasized. The threat is way beyond Afghanistan.” He added, “Those of you in the intelligence committees, the foreign relations committee, defense committees, you know well, we have to remain vigilant against the threats to the United States wherever they come from.” He subsequently focused his attention on internal terrorist threats, explaining, “And we won’t ignore what our intelligence agencies have determined to be the most lethal terrorist threat to the Homeland today. White supremacy is terrorism. We’re not going to ignore that either.”

These clear, unambiguous and unprecedented statements and confessions confirm that white supremacist groups are a domestic terrorist threat, one that greatly exceeds that of Islamist groups such as al-Qaida and the Islamic State. In my estimation, such admissions by an American president are rare. Former President Donald Trump completely ignored threats from the extreme Christian right, white supremacist groups, armed violent right-wing militias and others, even openly encouraging these racist and extremist organizations. The most visible and powerful of these activities was the infamous and historic march that was considered a turning point for violent and militant Christian groups that publicly spread their hate-ridden beliefs and policies. This public display of their shameless and unfettered racism and extremism took place during the march organized on Aug. 11, 2017 at the University of Virginia in Charlottesville, Virginia, under the banner of “Unite the Right.” These young men from the extreme Christian right came out publicly to declare their extremism, racism and hatred. They shouted and chanted dangerous racist refrains threatening the unity of American society, declaring “White lives matter,” “You will not replace us” and “Jews will not replace us.”

Such activities were fully supported by Trump in several ways, including the fact that he did not criticize the actions and beliefs displayed by these groups and that he further blocked official government security and intelligence agency reports noting the threats posed by the groups. At most, when pressure from the national security agencies mounted and Trump was confronted with the facts and statistics from the field, he softened the tone of these reports and tried to change the wording and intensity of the protesters, shifting the focus to leftist Antifa groups.

Biden stressed the fact that the extremist right-wing Christian groups are considered terrorist groups and are the top threat to U.S. national security, and must be curbed and confronted. This fact, which Biden mentioned in his first speech, is based on numerous incidents and comprehensive security reports. For example, a study conducted from Jan. 1 to Aug. 31, 2020 by the Center for Strategic and International Studies in Washington, D.C., published on Oct. 22, 2020, “The War Comes Home: The Evolution of Domestic Terrorism in the United States,” concluded that 67% of the terrorist plots and attacks in the U.S. in 2020 were led by right-wing Christian racist groups that believe in the supremacy of the white race, or armed right-wing groups with the same tendencies.

There is also the joint report issued for the first time by the Office of the Director of National Intelligence on March 17, “Domestic Violent Extremism Poses Heightened Threat.” The credibility of this report is established by the fact that it was not written by just one U.S. security agency in a separate effort, but as part of a collective effort. The report compiles different views, opinions and assessments from all concerned parties, in coordination and cooperation with government agencies, such as the Department of Justice and the Department of Homeland Security. Among the security agencies that contributed to the report are the National Counterterrorism Center, the FBI, the CIA and the Defense Intelligence Agency. The executive summary of the report contained several essential and central points on the threats arising from “internal terrorism” and its most important sources at the federal level, including the following:

First: Domestic violent extremists pose a “great threat” to the security and stability of the country and include several groups: right-wing Christian groups, white supremacist groups, armed militias, as well as QAnon conspiracy theorists spreading false and misleading misinformation, such as that the November 2020 presidential election was rigged. The report also added that the motives for violent terrorist acts include racism, discrimination, challenging government measures related to COVID-19 or simply hatred for the federal government.

Second: American white supremacist groups have continuous direct contact and mutual influence with groups that believe in the same ideology in other countries, specifically in Europe and Australia, such as right-wing Christian nationalist groups or neo-Nazis. Furthermore, some American individuals who belong to right-wing groups have traveled to Europe to contact, communicate and consult with these European groups.

The facts adopted by Biden in his speech on Christian right-wing extremist threats were based on the statements by FBI Director Christopher Wray during the March 1 hearing before the Senate Judiciary Committee. Wray stated that the office classifies the seizure and storming of the Capitol building as domestic terrorism. “It’s got no place in our democracy and tolerating it would make a mockery of our nation’s rule of law.” He also added that the “Jan. 6 incident is not an isolated event. The problem of domestic terrorism has been metastasizing across the country for a long time now, and it’s not going away anytime soon.” He concluded his testimony, saying that such violence is “our highest threat priority, on the same level with ISIS and homegrown violent extremists.”

Biden also did not ignore the failed coup unveiled by the FBI in October 2020, when an armed right-wing Christian group planned to kidnap the governor of Michigan and the governor of Virginia, in addition to buying weapons and explosives for an attack, including bombing bridges.

Following these official admissions from the highest authority in the U.S. government related to the infiltration of extreme right-wing Christian terrorism in American society, I call on the other Western countries, such as France, the Netherlands, Germany and England, to pay attention to the danger and threats of right-wing terrorism, whether from within or from abroad, since intelligence reports have confirmed the existence of an international network that brings together and coordinates these Christian terrorist groups.