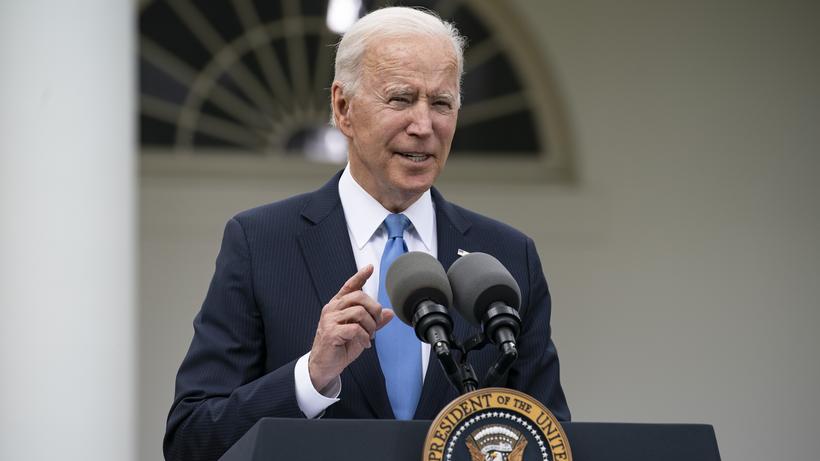 Joe Biden would be satisfied if peace simply returned to the Middle East. He doesn’t seem to believe in a solution to the conflict; his priorities lie elsewhere.

The violence in the Middle East may be making headlines again these days, but from the perspective of the United States, the issue has not been a top priority for a long time. China was at the very top of the priority list, next to pandemic and crisis policies at home, Russia and Iran, the climate challenge and much more. The administration in Washington has exercised restraint, and for very practical reasons. After all, no one knew who we’d even be dealing with in Israel in the future.

In any case, Prime Minister Benjamin Netanyahu appears to be a man without a future lately. The same goes for Palestinian President Mahmoud Abbas. Additionally, there were difficulties in the presidential transition that were related to Donald Trump’s legacy. Then things flared up again, and all eyes were on Biden. However, so far there hasn’t been much to see, because the American president knows that, while he can’t ignore the conflict between Israel and the militant Palestinians, he can’t resolve it either.

There is hope, as Biden put it last week after a telephone call with Netanyahu, that “this will be closing down sooner than later.” * Biden said the United States would work together with both sides in order to reach a “sustained calm.” Secretary of State Antony Blinken is calling every country with influence in the region. Meanwhile in Israel, Hady Amr, the Middle East diplomat hastily summoned from Washington, has arrived. He worked with the Barack Obama administration and has strong contacts with Israelis and Palestinians alike, but is only now acutely involved in handling the conflict, possibly in order to accelerate a temporary end to the violence. There doesn’t seem to be a plan for what comes afterward. The United States continues to block a joint U.N. Security Council statement, ostensibly so as not to hinder peace efforts on other channels, which would continue “virtually nonstop.”

What is playing out, seen through a cynical view from Washington, is a long-practiced pattern of escalation between Israel and militant Palestinians. Radical Hamas and Iran-backed Islamic jihad in Palestine launch their rockets. Israel reacts with superior military strength, destroys tunnel systems, arsenals and infrastructure, and eliminates leadership. Meanwhile, the United States lets there be no doubt about Israel’s right to defend itself. The terror brigades rage as long as they can. In the end, there is a cease-fire mediated by Egypt or Qatar and America. Both sides calm down again — or rather, gear up for the next round. Hundreds of dead must be buried, but the status quo prevails.

Biden wants to come to a resolution before the next round, but for now Netanyahu calls the shots. “It will take time,” the Israeli prime minister said on Sunday. “Our campaign against the terrorist organizations is continuing with full force.” And however U.S. diplomatic efforts may appear, Netanyahu could point to international support for this campaign and thank Biden in particular for his “unequivocal” support.

For the U.S. president, there should be no question about leaving Israel’s side. However, even as Biden emphasized Israel’s “right to defend itself when you have thousands of rockets flying into your territory,” he also said in a video message that “Palestinians and Israelis equally deserve to live in safety and security.” One is a clear position; the other is an attempt to appear neutral.

Now, it is not the case that Biden’s position toward Israel is just as uncompromising as that of his predecessor. What Trump promised as the “deal of the century” for the Middle East was essentially carte blanche for Israel at the expense of the Palestinians. At the same time, Trump somehow managed to mediate a rapprochement between Israel and multiple Arab states. Biden also recognized Trump’s effort, but at the same time, Biden thoroughly distanced himself from Israel’s annexation plans in the West Bank and support for a two-state solution, and financial support to the Palestinians has resumed. Nevertheless, Biden continues to refrain from criticizing Israel directly. It’s a difficult field on which there is little to gain.

The fact that the United States is having difficulty taking a true leadership role in resolving the conflict is probably not due solely to the unfortunately realistic assessment that a resolution is not even up for debate. Even if it wanted to, the United States is not nearly as prepared as it would need to be four months after Biden’s inauguration. Barbara Leaf, the nominee for assistant secretary of state for Near Eastern affairs, still needs to be confirmed by the Senate, and a new U.S. ambassador to Israel has still not even been nominated. When the embassy was still in Tel Aviv, the consulate in Jerusalem was mainly a liaison office for Palestinians. It was closed with the relocation to Jerusalem, placing another burden on stronger engagement, if desired.

Currently, it is less likely that Biden will come under pressure from his own party. Members of Congress from the left wing, such as Alexandria Ocasio-Cortez or Rashida Tlaib, are drawing attention with sweeping attacks on Israel: “Apartheid states aren’t democracies,” they tweet. And Rep. Ilhan Omar calls it “disgusting and immoral” that the United States has supported the violence. Left-wing Sen. Bernie Sanders wrote in The New York Times that Israel’s treatment of the Palestinians is a “system of political and economic oppression.” He calls Hamas’ rocket fire “absolutely unacceptable,” but wrote that he also believes the United States should stop defending Netanyahu’s government. In a letter to Biden, more than 20 Democrats demanded demanding that he put more pressure on Israel to stop evicting Palestinians from their homes.

As it has been said before, this won’t change Biden’s position on the current escalation for now. However, public reaction shows not only that the U.S. president can achieve little that is tangible in his Middle East foreign policy, but that domestic policy can also get complicated quickly, however strong the Israel lobby in Washington may be. In any case, the United States will likely be interested primarily in calming the situation without being harmed in the process. Especially in light of the efforts to restore the international nuclear deal with Iran, Biden won’t want to unnecessarily get in anyone’s way — Israel’s least of all. He will have to manage the conflict carefully before he can even think of attempting to resolve it again.

*Editor’s note: Israel and Hamas agreed to a cease-fire of the most recent hostilities on May 20.

About Michael Stehle 51 Articles
I am a graduate of the University of Maryland with a BA in Linguistics and Germanic Studies. I have a love for language and I find translation to be both an engaging activity as well as an important process for connecting the world.