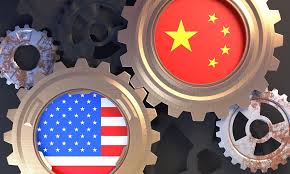 Conflict between America and China can only fetter the international economic recovery from the COVID-19 pandemic.

Last week, the governments of America and China resumed talks at the bureaucratic level to deal with the unresolved trade dispute. These are the first talks to take place since the inauguration of the Biden administration.

The preceding Trump administration criticized China for profiting from unfair trade and imposed a swath of tariffs as punishment. China retaliated with its own tariffs, and both sides’ tariffs remain in force. This past week’s talks ended without any sign of resolution.

Tariffs raise the price of imported goods and place a burden on consumers and businesses. The worsening of Chinese-American relations has had a large impact on the international economy, and even before the COVID-19 pandemic, it had brought stagnation to the economic climate of many countries, including Japan’s.

During these talks, tariffs on semiconductors and other high-tech goods, which determine the competitiveness of a country, were also part of the discussion.

The Trump administration placed restrictions on the export of semiconductors to Japan. In response, China is rushing to establish a domestic supply chain. The Biden administration is not only working on strengthening domestic production, but is also promoting the idea of cutting off China from the global supply chain.

Japanese companies, unable to obtain adequate supplies amid the U.S.-China conflict over semiconductors, have experienced difficulties in the production of cars and other goods. It is unacceptable to allow the world to fall into chaos because of a power struggle between America and China.

Economic ties between the two countries are deep, and a separation is not realistic. As great powers, they have a duty to limit their confrontation and stabilize the international economy.

The Biden administration promotes international cooperation, but continues to take a hard line on China. It views as problems human rights violations in Hong Kong and Xinjiang, and the increasing pressure placed by China on Taiwan.

Presumably with next year’s midterm elections in mind, Joe Biden wants to appeal to the workers of those industries that have declined because of the proliferation of cheap Chinese goods.

However, one-sided sanctions violate international rules. To continue with these protectionist policies, which prioritize America’s interest over the world order, will mean that Biden will be seen as no different from Donald Trump.

Of course, there are also many problems with China’s behavior. It has been criticized for infringing upon the intellectual property rights of American companies, and for distorting trade by giving its own semiconductor industry huge subsidies.

America and China need to recognize their responsibility as great powers. They should speedily attempt to improve their conduct in line with international rules, and devise a solution to these problems.