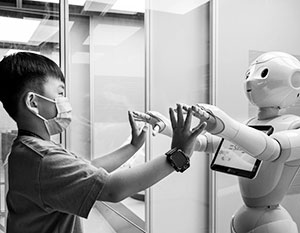 The American elite is embarking on an enormous task, the first since its lunar race with the Soviet Union. The U.S. will invest hundreds of billions of dollars in the development of national science and technology, all because China is literally breathing down America’s neck. In what areas of knowledge and invention has China already surpassed the U.S.?

Intelligent people have repeatedly said that every great state needs a great enemy. After a brief victory, even Rome would rot and decay in the absence of an enemy like Carthage, which challenged its power and posed a threat to its very existence.

The same fate befell the United States after the end of the Cold War and the collapse of the Soviet Union. Factors such as deindustrialization, a divided society, wasting resources, poverty and a shrinking middle class, along with technological decline, have led to today’s situation in the U.S.

And in the late 2010s, 21st-century Americans suddenly faced the fact that they were no longer the No. 1 power, at least as far as science and technology are concerned. The United States was surpassed by China in total research spending as recently as 2019, and in some areas China has already surpassed the U.S. in technology.

Only the lazy are ignoring Chinese 5G super-fast cellular networks. American manufacturers cannot successfully compete with Huawei, whose products were considered consumer goods a decade ago. Accordingly, the U.S. has imposed large-scale sanctions against Huawei, and is dissuading its European partners from introducing Huawei’s 5G networks.

There’s no need to talk about semiconductors, as the United States has already lost its lead in this sector. In 1990, the U.S. accounted for 37% of global semiconductor production; in 2021, it will be 12%. While it is still believed that Chinese firms cannot produce semiconductors that are as sophisticated as those made in America, they are successfully working to bridge this technological gap.

The Chinese lead the rest of the world in the production of drones, both for civilian and military purposes. Da-Jiang Innovations, a drone manufacturer, controls up to 80% of the world’s production of civilian drones. The nearest competitor, Intel, has only 45% of the market. A number of experts argue that Chinese combat drones are cheaper and more effective than the popular Turkish Bayraktars, which are long-endurance combat aerial vehicles capable of autonomous flight.

China’s military achievements go beyond combat drones. While Americans have a more powerful fleet and stronger armed forces, the Chinese counterbalance this advantage with technology. Chinese research institutes are also developing the latest cyberweapons, electronic suppression technology and hypersonic missiles, although they still lag behind the Russians in these areas. And, of course, there’s quantum computing, where the Chinese, according to some experts, are already ahead of the Americans. American ships are turning into a pile of floating metal in the South China Sea and East China Sea, where they will not be able to influence China’s military plans with regard to Japanese and Taiwanese issues.

Moreover, the Chinese successfully draw some of their scientific capabilities from the United States. Vzglyad has already reported that Chinese students account for up to one-third of all foreign students in American universities, and that ethnic Chinese account for up to half of all employees in American laboratories. Furthermore, people with Chinese last names account for up to 10% of patents registered in the United States. And the U.S. honestly believes that a large number of these researchers took part in a global Chinese program of stealing American technology, a theft that has put China at the forefront of several industries.

And now, Sen. Roger Wicker says “this is an opportunity for the United States to strike a blow on behalf of answering the unfair competition that we are seeing from communist China.” By “this opportunity,” he was referring to the U.S Innovation and Competition Act, which the Senate passed on June 8 with 68 votes in favor.

In fact, the Innovation and Competition Act is a 2,400-page package of bills aimed at containing and countering China. For example, among the proposed initiatives is a call to protect human rights in Xinjiang, a Chinese province where local Uighur Muslims are extremely dissatisfied with Beijing’s methods of government. The initiatives also include a call for U.S. officials not to attend the 2022 Olympics in the Chinese capital. However, the lion’s share of the bills concern investments in national research and industry to the tune of $250 billion.

In general, the money will go to developing artificial intelligence programs, developing cutting-edge computers, quantum computing systems, robotics, biotechnology, genome research and synthetic biology, etc. One of the key elements of the act is a provision aimed at consolidating American leadership in artificial intelligence, high-performance computing and advanced manufacturing.

“The premise is simple; if we want American workers and American companies to keep leading the world, the federal government must invest in science, basic research and innovation, just as we did decades after World War II. Whoever wins the race to the technologies of the future is going to be the global economic leader with profound consequences for foreign policy and national security as well,” said Democratic Senate Majority Leader Chuck Schumer.

China has already called the act a paranoid delusion and an attempt to deprive China of its legitimate right to development through technology and the severance of economic ties.

It would seem that these claims are groundless. Each state has the right to invest in its own development, as well as to engage in substituting imports and introducing protectionist measures in its market. However, in investing in science, the U.S. has imposed real and illegal sanctions against the Chinese, limiting their opportunities in the global market. This is no longer protectionism, but unfair competition.

American politicians, however, do not pay attention to allegations from the Chinese. “All over the world, authoritarian regimes smell blood in the water. They believe that squabbling democracies like ours can’t come together and invest in national priorities the way a top-down, centralized and authoritarian government can. They are rooting for us to fail so they can grab the mantle of global economic leadership and own the innovations,” Schumer said.

Take, for example, investment in chip production. The Americans appeal to the fact that there is indeed a huge shortage of chips and it will last at least until the end of 2023. A number of companies, Ford Motor Co. and General Motors Co., for example, are forced to cut production as a result; on average, there are 50 to 150 microchips per modern car, and it is useless to drive without them. What America does not say is that the shortage was created artificially in part, thanks to sanctions against Chinese companies.

Another motivation for investing in increased production of microchips on U.S. soil is the desire to reduce U.S. industry’s dependence on Taiwanese manufacturers. U.S. experts argue that in the context of the geopolitical conflict with China, and given Beijing’s claims to Taiwan, this dependence threatens the security of the United States.

However, they forget to note that the United States holds the release valve for the conflict. And if Washington does not play the Taiwan card, does not encourage the islanders to declare independence from the mainland, then no forceful action on the part of China can be expected.

The act does not only address foreign and economic policy, but it also contains domestic political benefits for the United States. Its passage brought Democrats and some Republicans together.

Remember that the stability of the American political system is based on Democrats and Republicans working together when laws are passed and implemented by congressmen and senators from both parties; that is, for example, Democrats and left-wing Republicans or Republicans and right-wing Democrats. In recent years, however, for a variety of reasons, the parties have gone from being partners to being very real enemies, and they now need to find common ground and work together again. The best way to do this is to talk about the few remaining policies they have in common, one of which is confronting China. So Schumer is right when he calls the act the most important bipartisan achievement of recent years.

Joe Biden, of course, has also already supported the bill. “As other countries continue to invest in their own research and development, we cannot risk falling behind. America must maintain its position as the most innovative and productive nation on Earth,” the president said. So the American Rome is to be congratulated as the Chinese Carthage has begun to mobilize it.