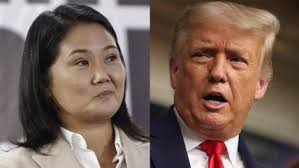 Take a rich child who grew up in the public eye. Someone deeply controversial, on the right, even the extreme right, who manipulates the masses. Give this former child an air of political ambition, a downright appetite for becoming the president of his country, and arm this child with an additional motivation: even if he is accused of a crime, presidential immunity will prove to be very useful in avoiding prison. Fraud, corruption, electoral plots—the allegations are serious, and he could have such motivation for a long time to come. He will desperately fight for political victory.

Finally, give him a tactic that is in perfect harmony with the mistrust of his political adversary and his taste for authoritarianism. In case of defeat, he will not concede. No, he’d rather try to discredit the entire electoral process; claim fraud, even without any supporting evidence; organize rallies for his troops to deny the election’s legitimacy; complicate the winning candidate’s assumption of office; and assure himself, even if he is removed from power, that a large part of the population will not recognize the elected government as legitimate. Mix everything together, and there you have the perfect recipe to undermine any democracy from the inside.

This recipe was concocted masterfully by Donald Trump last winter. Now he has an adversary who could surpass him with time and place in her scrupulous application of the formula: Keiko Fujimori, the daughter of Peru’s Former President Alberto Fujimori, who was three times a candidate in the Peruvian presidential election. The final result of the second electoral round on June 6 of last year was 50.12% for Pedro Castillo, a primary school teacher from an indigenous, rural family whose party calls for Marxism and Leninism, but who campaigned to the center left, and 49.8% for Fujimori, who based her campaign on the specter of a communist Peru, a new Venezuela. Yes, the results are close. But the national electoral authorities and the foreign observation missions did not discover any evidence of massive fraud. That said, it’s 2021, the era of post-truth. So, why surrender?

Of course, sore losers around the world, like Fujimori herself during previous elections, have alleged electoral fraud, attempting to cling to power. But since Trump, perception of the tactic’s legitimacy and its potential impact have changed. If Fujimori, who is waving the specter of communism and casting doubt on the electoral system, has almost the same discourse as influential Republicans in the United States, wouldn’t she be tempted to search for their support? If an ex-president of “the largest democracy in the world” refused to admit defeat, does Fujimori’s stubbornness sound more legitimate in the eyes of her own supporters?

The Peruvian right is not alone in being inspired by Trumpism since its rise in the United States; several analysts have already demonstrated his influence on the politics of Benjamin Netanyahu in Israel and Jair Bolsonaro in Brazil. If the invocation of electoral fraud goes international, it will be necessary to pay more attention to the other elements of the Republicans’ anti-democratic strategy that could also become “fashionable” for other aspiring autocrats.

Primarily, there is the question of restricting voter rights. Since Joe Biden’s election, several American states which remain under Republican control adopted a series of laws that aim to restrain access to the polls for people from majority Democratic communities: urban populations, African Americans, racial minorities. According to data collected by the Brennan Center for Justice, between Jan. 1 and May 14, at least 14 states adopted 22 laws that restrain voting access. Sixty-one similar laws are still under consideration in 18 state legislatures. We’re talking about new regulations that make it more difficult to vote by mail, move the deadline for receiving voting ballots, multiply the requirements for identification during voter registration, and even reduce access to registrar’s offices, among other tactics. The goal has been more or less asserted: to block access to power for the Democrats in the future, on both the federal and state level. It is feared that diversification of the American population harms Republicans, whose electorate remains very homogeneous. In the face of this demographic tendency, the choice has been made: it is better to undermine democracy than to lose, or worse, renounce an ideology that only interests an electorate in decline.

in the face of this joint action by Republican states, the Democrats are preparing a response. At the beginning of the week, House Speaker Nancy Pelosi attempted to convince her colleagues to reverse a part of the new state laws, thanks to federal powers. Passage of these laws is not guaranteed, given the distribution of seats in the Senate. The battle that will play out in the next weeks on these reforms will thus be crucial.

Just as the autocratic aspirants of the entire world followed Trump’s example, it can be expected that this other anti-democratic strategy of the Republicans will create more of these people, no matter the ultimate victory or defeat of Pelosi’s troops. If the Americans themselves, these “champions of democracy,” are playing with voting rights and access in order to influence future elections, why not others? Why not everyone?

It is possible that the current political tendency will produce other anti-democratic models, judging by the state of the world.