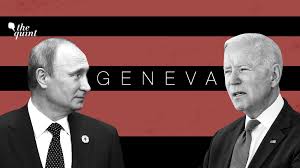 In recent years, Russian-American relations have reached their lowest point. That’s why the recent full-fledged summit between the leaders of Russia and the United States may be considered a breakthrough of sorts — for both sides.

For starters, the current presidents of Russia and the U.S. have enough healthy pragmatism to fix the unacceptable lack of stable and predictable relations between the two leading nuclear nations. To the surprise of many, it was Joe Biden’s administration that showed noticeable initiative in defusing tensions between the countries. One of the first items on his foreign policy agenda was the unconditional extension of the START III Treaty until 2026.

That decision was made during negotiations between the Russian and U.S. presidents in Geneva. The only final document from the summit was their joint statement on global strategic stability. Moscow and Washington are being responsible international actors, and don’t have the luxury to abandon dialogue about reducing the risks of armed conflict and the threat of nuclear war, even if bilateral relations have reached the lowest level.

In turn, a comprehensive bilateral dialogue on global security and nuclear nonproliferation may gradually bring other related issues of mutual interest to a level acceptable to both countries. Powerful and proud states, even in the face of ongoing confrontation, should be able to develop basic rules of interaction and maintain stable channels of communication — especially in tense situations.

It is significant that Biden not only outlined joint efforts to normalize the situation in Syria and Libya, but also noted Russia’s constructive role and even its assistance in resolving the crises in Iran and Afghanistan. The strengthening of Moscow’s position in the greater Middle East, oddly enough, in its own way, contributes to establishing effective Russian-American mechanisms to coordinate interests in this strategically important region.

This cannot be said about Ukraine, which has become a stumbling block for Russia and the United States, a situation that has remained at a standstill for many reasons. Moscow is working with amazing patience and consistency to ensure that Kyiv implements the Minsk Agreements approved by the U.N. Security Council, while Washington only reiterates tired mantras about the sovereignty and territorial integrity of Ukraine. Nevertheless, it may be considered a slightly encouraging sign that American leadership refused to respond positively to Kyiv’s insistent requests for early acceptance into NATO. However, in Moscow’s long-term perspective, bearing in mind the previous negative experience, Kyiv may be satisfied only with legally binding international agreements, not with empty rhetoric.

The Russian and American leaders identified certain points of nonconfrontational contact regarding the Arctic, global climate change and even the issue of joint responses to cyber threats. If the Helsinki agreements from the previous U.S. administration on the joint investigation of cybercrime remain unrealized due to complex domestic circumstances in the U.S., then we cannot expect any fierce resistance to the communication mechanisms initiated in Geneva by the new president from the “swamp” that is Washington. Despite stubborn and repeated allegations of routine charges against Russia, Biden has sensibly assessed the cyber risks from numerous actors, including nonstate actors, operating in the international arena today.

“Okay, what’s next?” the American president asked at his press conference following the summit. In response, the Russian leader tells a separate press gathering that there are no illusions and there can’t be any. Officially on paper, the United States will remain an unfriendly country for Russia. Moscow is Washington’s main military threat. This in no way prevents a dialogue to defuse tension and facilitate interaction on areas of mutual interest.

As shown by an account of the Geneva event, this is already a breakthrough of sorts in Russian-American relations, relations which we simply cannot allow to deteriorate further.

The author is the head of the research center StrategPRO.

The editorial board’s position may not reflect the opinion of the author.