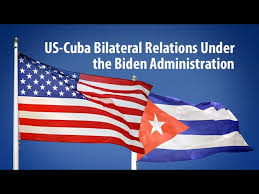 There was hope in Cuba after Joe Biden was elected. His predecessor had taken intransigence so far that the Caribbean island was redesignated a “state sponsor of terrorism” in the final days of his presidency.

Except that this week at the U.N., it was the Biden administration, not Donald Trump’s, that opposed the lifting of the embargo that was imposed 60 years ago. It’s tough being Cuban!

So it’s back to square one regarding relations between Washington and Havana. Yet the economic reforms and easing of U.S. sanctions crowned by Barack Obama’s visit in 2016 finally allowed Cubans to believe that, half a century later, tensions were dissipating.

Trump — out of fanatical anti-communism, political expediency and visceral opposition to everything Obama had accomplished — had put a complete halt to the rapprochement between the two neighbors. It has to be said that it was a calculation that paid off for him last November.

The presidential election night and the following hubbub might have played out very differently if Florida’s 29 Electoral College votes had fallen on the Democratic side. Trump took the state, thanks, in part, to the support — 56% versus 41% – of the Cuban-American community.

During his campaign, Biden essentially promised to re-commit to the path taken by his former boss in 2016: to encourage a liberalization of the Castro island through discussions and the resumption of socio-commercial exchanges. The reality, once again, is that the new Democratic president cannot achieve his ambitions.

His handful of majority votes in the House of Representatives and the tie between Republicans and Democrats in the Senate leave him powerless to make progress on this issue.

In fact, as his own priorities — infrastructure investment, tougher environmental measures, tighter gun control, etc. — stagnate, let’s trust that he won’t squander an ounce of political capital on an initiative that remains controversial.

From there, as his representative at the U.N. General Assembly did on Wednesday, he actively opposed a resolution condemning the embargo (rather than abstaining as Obama did in 2016). It is this kind of attitude that disappoints even those who expected little from the former vice president.

From Misery to Misery

Meanwhile, it is ordinary Cubans who are bearing the brunt of the standoff between the two countries. The reduction in the number of American visitors caused by the constraints reimposed by Trump could not be compensated for by travelers from elsewhere, since the pandemic, again, dried up the foreign currency windfall.

On the other hand, the Castro brothers are no longer in power, but the old reflexes of repression of dissent, notably by limiting access to the internet, have not disappeared. In short, Cubans will still have to be patient with Communist Party officials who remain reluctant to accept necessary reforms, with army officials who have no intention of relinquishing control of many aspects of the economy, and with a large neighbor who, even if less zealous than before, continues to drag its feet.