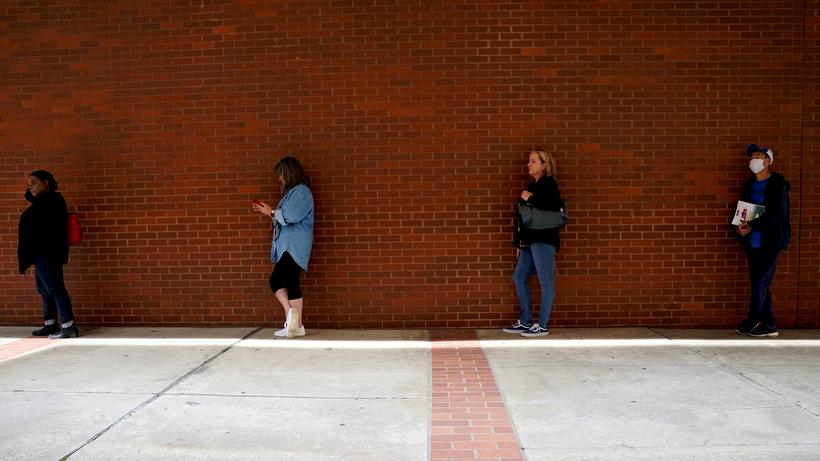 The Biden administration is celebrating a superficially outstanding jobs report. However, young people in particular still have big problems.

Brian Deese was in high spirits when he stepped up to the podium in the White House briefing room last week. President Joe Biden’s National Economic Council director had good news to announce. The Department of Labor had just published a new jobs report — and it was outstanding. According to Deese, more than 3 million jobs have been created so far under the leadership of the Biden administration. “We’re making progress across the board in all ways,” he said.

The U.S. government can indeed celebrate excellent job numbers these days. A good year after the shock triggered by the pandemic, the country is in an upswing. The 2021 growth rate is expected to be the highest in decades, and the unemployment rate has fallen steadily from its peak of almost 15% to below 6%. Even so, it’s still almost twice as high as it was before the outbreak of the pandemic, but the trends are giving analysts confidence. According to the Federal Reserve Bank of Dallas, the United States could already return to full employment in the coming months. The pandemic crash would thus be consigned to history, at least on paper.

However, below the surface things don’t look quite so rosy in the American job market, especially not for young adults. The unemployment rate for 20- to 24-year-olds has also significantly fallen since the shutdown in early 2020 — from more than 25% to just over 10% today — but this decline doesn’t tell the whole story. That’s because the unemployment rate only counts potential workers who are actively looking for work. However, by now, several million people in the United States have completely given up, many young people among them.

An analysis by the Center For Economic Policy Research, a progressive think tank in Washington, D.C., recently came to frightening conclusions. According to the analysis, in the first months of this year, almost 4 million 20- to 24-year-olds in the United States neither had a job nor were in training or continuing education. That accounts for more than 18% of this age group. The corresponding indicator, called the NEET rate, is currently still significantly higher than before the pandemic. Minorities are affected by this increase especially severely.

Among these almost 4 million young adults are likely those who have turned their backs on the U.S. job market in recent months. And they aren’t the only ones. The labor participation rate, meaning the portion of the population that has a job or is actively looking for one, is currently still two percentage points below pre-pandemic levels. What sounds like a small swing represents high absolute numbers. In June, there were still around 7 million fewer jobs in the United States than before the pandemic. After young adults, women in particular have withdrawn from the job market. When schools closed, they quit their jobs significantly more often than men in order to take on family work. They are only slowly returning to the job search. Next comes older people, who have retired in greater numbers than before the pandemic.

The departure of younger people is concerning observers because even if they could return to the job market or to training soon, the gap is harming them in the long term. Among other things, this is shown by a CEPR analysis of American census data relating to the effects of the 2008 financial crisis. According to this analysis, young workers who lost their jobs at that time were affected even more strongly by unemployment, even years later, than older workers who also lost their jobs during the downturn.

The impacts of this development will be felt over entire lifetimes. For example, while more than half of all American baby boomers owned a house at the age of 30, the figure for millennials who were fully affected by the financial crisis early in their professional lives is only 42%. Today the average property buyer in the United States is 55 years old — a record number.

For the “lockdown generation,” the damage could be even more far-reaching now. As early as last year, when it became clear how much the pandemic would hurt young adults, the organization Helvetas warned of the global and long-term effects of the pandemic. The pandemic period could lead to a deepened feeling of injustice, to lasting discontent and even to social unrest.

However, not all experts consider such horror scenarios to be the most likely consequence of the high NEET rate, especially not with regard to the United States. “I think the risk of protests was significantly higher last year during the lockdowns,” says Tara Sinclair, economics professor at The George Washington University.*

Sinclair doesn’t think that today’s 20- to 24-year-olds will suffer in the long term from the pandemic gap the way millennials did from the financial crisis. “The situation is completely different,” she says. For one thing, potential employers at the time often looked to blame those affected for losing their jobs. Things are different with the pandemic. “The pandemic has touched everyone in some form,” says the professor. It hardly needs to be explained in future job interviews that in the summer of 2020, you were suddenly out of a job.

This Time, the Upswing Is Coming Faster

Additionally, the quick economic upswing could shorten possible gaps in one’s resume. After the financial crisis, the American economy recovered only slowly. It took years for pre-crisis levels to be reached again and for the NEET rate among young adults to fall. Things should be different with the pandemic — and could thus soften the impacts of the lost pandemic year. “For many young adults, the coronavirus should have only delayed experiences and degrees,” says Sinclair. However, the idea that this has long-term negative effects, unlike with school children, is anything but proven. The boom could solve the problem before it actually arises.

In fact, the trend points in this direction. While the NEET rate is still high, it has already fallen again in comparison to last year. The more pandemic restrictions are lifted, the faster it should go. That’s because before the shutdowns, the majority of the affected young adult NEETs were working jobs in restaurants or in retail, for instance, which couldn’t be transitioned to remote work. These jobs are currently coming back, at least in part. Currently, the economy is lamenting a labor shortage rather than a surplus of applicants. In the area of training and continuing education, pre-crisis levels have even been reached again.

All of this will ensure that the participation of young adults in the job market will soon rise again, Sinclair believes. “Right now I’m more concerned for those who are already looking for a job and can’t find one,” she says.

*Editor’s note: Although accurately translated, quoted remarks by Tara Sinclair could not be independently verified.