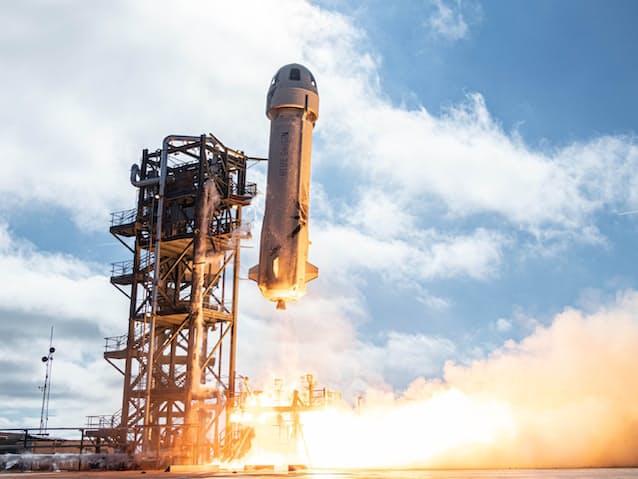 Starting on July 11, Richard Branson and Jeff Bezos, famous businessmen who have put their power into space business, will successively embark on space tourism. As Bezos’ rocket will carry ordinary paying passengers, it finally marks the start of the space tourism business by a private enterprise.

On July 1, Branson, head of the British Virgin Group, announced that he will take a test flight on a spaceship developed by an affiliated American private firm and travel to space on July 11. He made clear that he was competing with Bezos, the founder of America’s Amazon, who plans to depart on July 20.

The American company Blue Origin, set up by Bezos, plans to launch on July 20. Aside from Jeff Bezos and his younger brother Mark, passengers who won tickets in an auction will ride. Russia’s public institution has sent paying members of the public into space, and the private company SpaceX has sent astronauts into space, but this is the first time that ordinary, paying passengers will ride on a private-built rocket.

The two companies’ spaceflights are suborbital. In Blue Origin’s case, the capsule in which passengers will ride will separate from the rocket roughly three minutes after launch. After arriving in space and experiencing a few minutes of weightlessness, the capsule will descend to Earth by parachute. It will take little more than 10 minutes from launch to descent.

Blue Origin’s tickets reached $28 million (3.1 billion yen), but Virgin’s commercial tour price is set at about $250,000 (27.5 million yen) and the price range is generally expected to be in the tens of millions of yen. Compared to the spaceflights that astronauts take to the International Space Station, which cost around 5 billion yen, space can be experienced relatively cheaply.

Suborbital flight is also expected to be a mode of transport that covers long distances in a short time. The American company SpaceX proposes to connect New York with Shanghai in around 40 minutes with its spacecraft designed to travel to Mars. It also aims to reduce cost by expanding the use of its rockets and mass-producing them. Its founder, Elon Musk, aims for a fee comparable to economy class in airplanes; if this were to be accomplished, the price of space travel would be within reach for ordinary people.

But unconfirmed issues — for instance, regarding safety — remain. In America, which is taking the lead, the government explains to passengers that it cannot ensure their safety and requests their understanding that they cannot seek compensation in the event of an accident. But Masami Sasaoka, an associate professor at Yokohama National University, points out that a trial could be possible if the explanation were felt to be inadequate.

Furthermore, it is unclear whether suborbital flights — which do not orbit the Earth — qualify as spacecraft or airplanes. Under American law, they are classified as space activity, but under Japanese law they are not, with satellites cited as precedent. The rapid preparation of related legislation is essential to develop space tourism as a business.