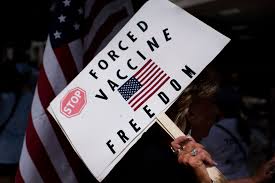 Trumpists reject Darwin, but promote the Darwinism of the virus, which is decimating their families and themselves.

Only the boss was exempt. The rest of the staff was compelled to don a face mask at the office from day one so as not to infect their employer. Publicly, however, it was best not to display it. Journalists were to take their masks off while in press conferences if they wanted their questions answered. In that house, the White House, where they led the fight against the pandemic — if the president’s chaotic instructions could be called leading — everybody seemed to act as if power had immunized them.

Eventually, as a result of all that recklessness, Donald Trump too got infected. He was even in critical condition. He needed state-of-the art, untried drugs, which were extremely expensive and unaffordable for ordinary citizens. He got out unscathed and was able to exhibit his restored health as if he had conquered death. Instead of this being a warning to his followers, their preconceptions were confirmed, first against face masks and social distancing and, months later, against vaccines as well.

Such are his voters, hostile to reason and to any public health measure governments may dictate, be it masks and lockdowns or, now, vaccines. They do not believe in science or medicine, but in power and strength, in money and in the rich and powerful. The single, apparently rational decision — albeit paradoxical — made by this leader was also due to this savage religion: investing heavily in vaccine research, which was a great success, even if he was thinking about stock market profits, not the people.

Clear proof of this contradiction: Among those who voted for him in larger numbers are the most hostile opponents of vaccines and the least vaccinated. They spread the most demented conspiracy theories. They reject the duty to protect themselves in public spaces and at work. Moreover, they are against vaccination being mandatory and support laws that guarantee certain freedoms that, according to them, have been squashed. They are experts in retrograde legislation that interferes with the right to vote, inhibits a critical teaching of history and censors Charles Darwin’s theory of evolution.

Reminding them of slavery in the past or compelling them to obey health care-related orders is incompatible with their notion of freedom. They reject Darwin, but promote the Darwinist selection of the virus, which is decimating the deniers, conspiracy nuts and their families. They are the ones being decimated. They wish to be free to infect and die.