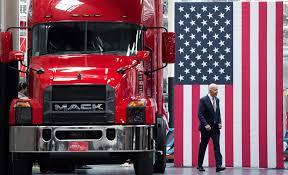 On July 28, President Joe Biden visited the Mack Lehigh Valley Operations, a large truck manufacturer located in Macungie, Pennsylvania. His objective was to promote the Buy American Act. In his afternoon remarks at the plant, Biden made a firm pledge to the workers: “My administration is going to make ‘Buy American’ a reality,” the president said. “Our manufacturing future, our economic future, our solutions to the climate crisis are all going to be made in America, creating good jobs. This is what it means to build back better.”

On the same day, the White House announced measures to strengthen its Buy American policy, including raising the standards for American products and strengthening the domestic supply chain of critical goods and products. Currently, 55% of content required for a product to be on the federal government procurement list must be domestic. The Biden administration has raised this standard to 60%, and proposed stepwise increments to 65% by 2024 and 75% by 2029. This means that in 2029, a product needs to have at least 75% domestic content in order to be recognized as being made in America. In addition, the Biden administration has extended the price preference system — typically a 6% price advantage provided to American-made products when bidding — to critical goods, with the intention of supporting the expansion and development of domestic supply chains. It also established reporting requirements for critical goods. So far, it seems that Biden is making steady progress on his pledge to protect American manufacturers and employment.

The White House stated that the proposal would “support the domestic production of products critical to our national and economic security.” An increase in the proportion of American-made goods in federal procurement means that foreign businesses would have less access to the federal procurement market. Korean business exports to the U.S. will naturally be affected.

The announcement follows up Biden’s Buy American executive order from Jan. 25, which he signed shortly after he took office. Buy American is a policy to increase the proportion of American-made products and services in the federal procurement market, which is worth more than $600 billion annually. Under this policy, the federal government’s enormous procurement spending would primarily be directed toward goods and services made in the U.S.

Buy American is a combination of the Obama administration’s focus on reviving domestic manufacturing and the Trump administration’s promise of supporting the manufacturing industry as a whole. Biden has been actively implementing this policy mainly for political reasons. The Democratic Party lost its traditional working class base of supporters to Donald Trump in the 2016 presidential election. This ultimately led to the Republican Party taking control of the White House.

Subsequently, the Democratic Party made all-out efforts in the 2020 election to regain working class support. It pledged to create massive numbers of manufacturing jobs and to improve the quality of domestic production lines. The strategy worked, and the Democratic Party successfully reclaimed the presidency. Policies to support the manufacturing industry will remain a key element for victory in next year’s midterms as well.

The Buy American policy also shows that Biden intends to keep China in check. The Biden administration has been working to strengthen domestic supply chains for products whose supply was traditionally very dependent on China, such as semiconductors, batteries, raw materials for medicine and rare earth metals. Both Democrats and Republicans are keen on stopping China’s rise.

Moreover, the Biden administration is demanding that allies join in this strategy. It is pressuring businesses in allied countries to contribute to creating jobs for Americans by investing in the U.S. economy. South Korean businesses are expected to invest more in the U.S. in the future as a consequence. This inevitably creates concerns about reduced domestic investment and a decrease in the number of high-quality jobs in South Korea. At the same time, stronger preferences for American-made products will likely raise barriers for South Korean businesses seeking to enter the U.S. market.

With a new president in office, the Buy American plan seems to have received even more backing than it did in the Trump administration. This is expected to place a considerable burden on South Korean business. If South Korea keeps being dragged around by Biden’s protectionist trade policy, it will only undermine South Korea’s national interest. It should find ways to maximize opportunities and minimize losses. Businesses and the government will have to collaborate on this matter. South Korea needs to break through the Buy American policy by establishing a new level of response strategy.