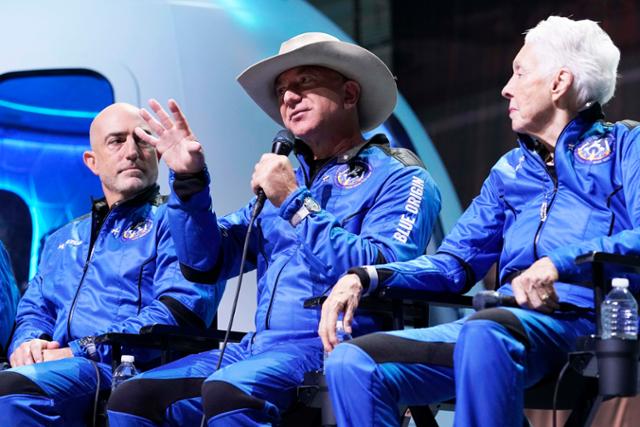 The United States thinks of itself as a country of the rich rather than a rich country. Statistics show there are 800 billionaires, and that 1% of the rich account for 40% of America’s wealth. There is a great deal of curiosity about rich people, because people such as Bill Gates appear in the news as often as Hollywood stars and often make headlines because their enormous wealth. A person who has frequently appeared in the news recently is Amazon’s Jeff Bezos; thanks to a 15-minute space trip that cost 6 trillion won to organize (approximately $5.1 billion), it’s hard to avoid seeing him in his cowboy hat.

There is also a great deal of negative news about billionaires. They are the face of inequality — and deservedly so, since they are the greatest beneficiaries of an unfair tax system. According to reports, the 25 richest people in the U.S. paid only 3.4% of their five-year fortune in taxes. Warren Buffett posted 0.1% and Bezos posted 0.98%, so it is understandable that there is an outcry about raising taxes for the wealthy. Nevertheless, Americans generally view the rich in a positive light. A recent poll found that billionaires do more good than bad, and when asked if they threaten democracy, only 28% said yes.

Even in terms of personal favorability, except for Facebook’s Mark Zuckerberg, the likes outnumbered the dislikes. One of the factors contributing to this approval may be their charitable donations. In fact, since John D. Rockefeller, it is true that the rich have contributed huge sums to society. The Gates Foundation has been a leader in the eradication of global infectious diseases for more than 20 years, and the generous Koch brothers of right-wing politics have donated a great deal of money to science, culture and art. The public broadcast science documentary program I enjoy is also produced with their support.

There is more than the bright side to giving by the wealthy. One of the reasons why they donate such large amounts of money is the tax breaks they receive, breaks that are greater for the wealthy. To put it mildly, the rich spend their money on charity instead of paying taxes. You might think that the money could be collected as taxes and used for good, whether it is used by the government or a charitable foundation, but there is a big difference between the two. Although the government’s budget does not always reflect the interests of the people and is wasted in practice, ultimately, the government’s budget is subject to democratic control. On the other hand, the amount of money that billionaires donate is a personal decision.

When you look at U.S. charitable donations of more than 400 trillion won (approximately $342 billion) a year by area, religious groups and businesses account for the most at 30%, followed by education at 14%. The amount of money used to help the poor that comes to mind in terms of philanthropy is less than you think. One of the reasons for the large proportion of donations to education is that when parents donate to their children’s schools, the donations are considered charitable contributions subject to tax benefits. Accordingly, schools in wealthy neighborhoods raise a lot of money from parents to expand facilities and support extracurricular activities. This is obviously difficult in poor neighborhood schools, and so, these kinds of donations increase inequality.

Political scientist and economist Robert Reich has said that the philanthropy of the rich is one of the most unregulated and uncontrolled exercises of power in a democratic society, and that the U.S. government subsidizes such unregulated power through tax cuts. “Space Cowboy” Bezos thanked Amazon workers and customers for paying for his adventure. It’s bittersweet to think that taxpayers like me are included in that unwanted audit.

About Anukrati Mehta 32 Articles
A Journalism and Communication graduate, Anukrati Mehta is a Korean translator for Watching America. She spent two years as a content creator for major companies in the U.S.A and Asia before turning her attention to her lifelong desire of becoming a multilinguist, which eventually led her to this role. When not absorbed in transcribing news articles for Watching America, Anukrati can usually be found listening to philosophy podcasts, sampling new movies, teaching Korean to students, or planning the perfect vacation. She is currently trying her hand at learning Japanese and playing the ukulele.