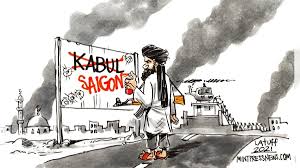 “For 20 years, the United States has continued to favor almost exclusively a military option,” says Bernard Adam, director of the Research and Information Group for Peace and Security. “It lost the war. And the Taliban won. A total failure and a backslide of 20 years.”

Saigon, April 30,1975. The scene was filmed by television crews and broadcast around the whole world: a military helicopter hurriedly rescues several people hiding on the roof of the American Embassy in South Vietnam. They were the last people evacuated to American ships at sea. Several hours earlier, the North Vietnamese forces and the Vietcong had entered the city, definitively marking the end of the war in Vietnam following the withdrawal of American troops, which started in 1973.

Kabul, Aug. 15, 2021. The scene was filmed by television crews and broadcast around the world: a procession of military helicopters evacuated hundreds of people to the airport, where planes hurriedly took off for the West with their Afghan allies. Several hours earlier, Taliban forces had invaded the capital following the withdrawal of American troops, which started several months prior.

The Americans have suffered many failures in their military interventions in the past, but they have a short memory. The novelist Gore Vidal renamed his country in 2004, after the invasion of Iraq and called it “the United States of Amnesia … We learn nothing because we remember nothing,” he wrote.

In addition to this, in 2004 Bertrand Badie, a French international relations specialist, wrote a book with the evocative title “The Impotence of Power,” in which he analyzes the discrepancy between the beliefs of those who praise the benefits of military power and the reality on the ground. Since the United States is the only superpower, he believes that, “Power becomes a factor of disorder. Today, supremacy is a source of instability: the more power shows itself, the more power mobilizes against it. The United States is at the center of a paradox: there has never been a state in history that has accumulated as many resources for power, yet never has it proved so incapable of mastering the challenges it faces.”

The intervention by the United States in Afghanistan is a consequence of the 9/11 attacks. That day, 19 al-Qaida terrorists armed with box cutters hijacked four airliners. A congressional commission estimated that the terrorist operation cost $500,000. From 2001 until today, the 20-year military presence in Afghanistan has cost $1 trillion.

In 2005, another expert international relations scholar, Ghassan Salamé of Lebanon, wrote a book titled “When America Changed the World.” He wrote that “[t]he logic of force has destroyed the force of logic.” For him, “served by an unrivaled military power, America has overestimated the efficiency of military means at the expense of other means of influence,” such as discussion, listening to others and multilateral action.

As early as 2001, historian Emmanuel Todd, in his book “After the Empire: The Breakdown of the American Order,” noted the decline in American power, highlighting its large public debt, the deficit in its external balance and the increase in military spending. For Todd, “[t]he United States is becoming a problem for the world. We have become accustomed to seeing it as a solution. Protectors of political liberty and economic order for half a century, it appears evermore to be a factor of international disorder, maintaining, where it can, uncertainty and conflict.”

Currently, U.S. military spending comes to 40% of global military expenditures, equal to $700 billion, while providing only $35 billion for developmental aid, some 20 times less. Throughout the American presence in Afghanistan, many observers, average Americans among them, have pleaded in vain for a marked increase in aid for socioeconomic development, which they say is an essential element in the fight against poverty and in finally countering the influence of the Taliban.

For 20 years, the United States has continued to favor almost exclusively a military option. It lost the war. And the Taliban won. It’s been a total failure and a backslide of 20 years.

If only the lesson were instructive to the Europeans. When the Americans ask them to increase their military spending to 2% of gross domestic product, they should ask themselves what it will pay for. On the other hand, their public development aid should be increased, to stop others like the Taliban from gaining power elsewhere in the globe.

Bernard Adam is the director of the Research and Information Group for Peace and Security.