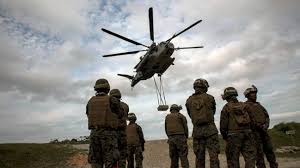 How many times do we have to raise our voices in protest before people will listen to us? As if to add to the burden of dealing with the serious COVID-19 pandemic, Okinawa has been hit by a series of incidents and accidents involving the U.S. military.

Will the Japanese and U.S. governments take the same attitude toward Okinawa when something similar happens on the mainland? We call again for a sincere response to the concerns and anger of the people of Okinawa.

Yesterday, the Okinawa Prefecture called the heads of the foreign and defense ministries to the prefectural office. With regard to an incident in which an Osprey at the U.S. Futenma Air Station dropped panels and parts over one meter long (approximately three feet) during a flight the night of March 12, the prefecture appealed to the government to firmly ask the U.S. military to suspend training and conduct a comprehensive inspection of its equipment.

No human injury or material damage has been confirmed, but the incident could have been catastrophic. The U.S. military’s disregard for the local community is evident in many places, exemplified by the fact that it did not contact Okinawa Prefecture until the afternoon of day following the incident. The Japanese government said it regrets the incident and shares the frustration, but it has not taken any concrete action.

In June, a U.S. military helicopter made an emergency landing in a field in the city of Uruma; in July, a container fell loose off the coast of Tonaki Island. This monthly trouble has raised concerns that the operation of the base is becoming dysfunctional.

Seventeen years ago, on Aug. 13, 2004, a helicopter crashed into Okinawa International University and burst into flames. The statement by Okinawa Vice Governor Kiichiro Jahana that “nothing has changed at all” is heavy.

Yesterday, there was also movement in the prefectural assembly.

A member of the U.S. military was arrested by the prefectural police at the end of last month on suspicion of attempting to sexually assault a Japanese woman on the street in a residential area. The Diet unanimously passed a resolution protesting the U.S. government and the U.S. military, referring to the alleged assault as a “heinous incident that tramples on human dignity.”

So far, the U.S. military has refused to acknowledge the prefectural government’s protest, saying that the man worked for as a contractor for the U.S. Department of Defense and did not fall under military jurisdiction.

However, U.S. military personnel are Americans employed by the U.S. military or the U.S. government in Japan, and like soldiers, they are protected under the Status of Forces Agreement. The attitude of pretending not to know who they are on the grounds that they are not under the jurisdiction of the U.S. military is upsetting to the people of the prefecture and will only further deepen their distrust.

In 2000, the Japanese government, U.S. military and local governments established a forum to discuss the prevention of such incidents and accidents involving military personnel and civilians, but the forum has not convened since April 2005. This raises questions about the sincerity of the government as well as the U.S. military.

On Okinawa Memorial Day in June, Prime Minister Yoshihide Suga stated that his office would “do everything we can” to reduce the burden of the bases. The prefectural assembly’s resolution calls for the establishment of a “forum for immediate and responsive working-level consultations.” To remain true to his word, he should respond promptly.