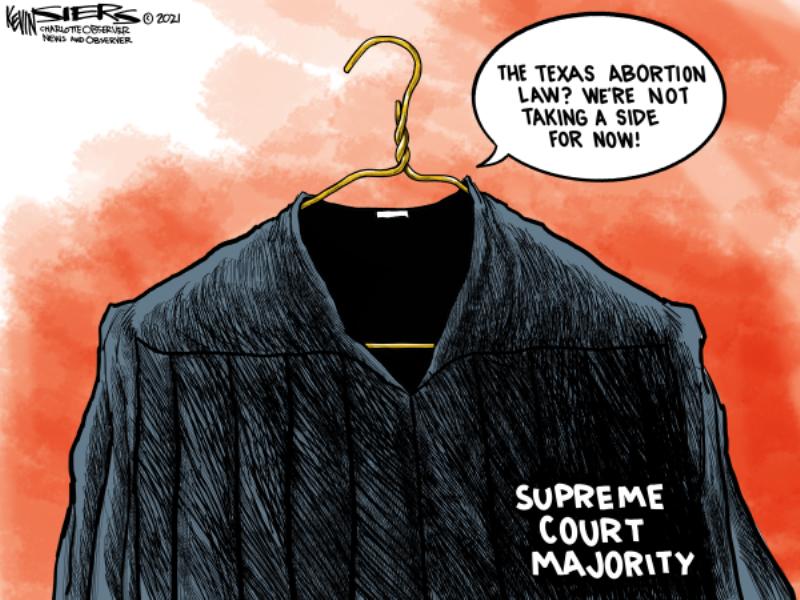 The Supreme Court and its conservative supermajority’s decision pose a real threat to the law that, for the past 48 years, has allowed American women to terminate pregnancy.

Texas has passed the strictest antiabortion law in the U.S. since the landmark Roe v. Wade ruling in 1973, and the Supreme Court declined to block its implementation. The court and its conservative supermajority’s decision pose a real threat to the access to legal abortion that American women have had for the past 48 years. This issue will most likely become a key theme in the campaign ahead of Congressional elections next year.

The bill was passed by the state legislature and signed into law by Republican Gov. Greg Abbott. It prohibits abortion after a fetal heartbeat is detected, which most often happens six weeks into a pregnancy, before some women, if not most, know that they are pregnant. Other states have already tried to impose such a restrictive time limit, but without much success. What sets the Texas law apart, however, is the innovative and unprecedented way of enforcing it. The law states that doctors, other health officials or “anyone” who aids and abets an illegal abortion can be sued by private individuals and subject to a $10,000 fine. It includes cases where the woman is impregnated as a result of rape or incest, but there is an exception for medical emergencies when the woman’s life is in danger.

Pro-abortion organizations, in an attempt to stop the law from taking effect, appealed to the federal Court of Appeals, but the case was then filed in Supreme Court. By a 5-4 vote late Wednesday, the justices denied the emergency appeal. The dispute is not over yet, since the Supreme Court has not ruled on the merits of whether or not the case is constitutional. Therefore, it is expected that the case will be heard at a later date, but the expected players are not promising a successful outcome for supporters of legal abortion. Five conservative justices voted against blocking the Texas law, including Donald Trump’s three appointees: Amy Coney Barrett, Neil Gorsuch and Brett Kavanaugh.

The court ruling, although it does not decide on the legality of decisions made by the lower courts and the constitutionality of laws passed by Congress, have prompted almost all abortion centers in Texas to close, including Planned Parenthood clinics. All women from the second largest state in the country wishing to have an abortion will have to travel to other states. This will affect primarily the poorer citizens, particularly racial minorities. At the moment, travel in the U.S. carries additional risks due to the COVID-19 pandemic.

Since the 1973 Supreme Court decision in Roe v. Wade, U.S. women have had the right to an abortion up through the 24th week of pregnancy. Since then, however, Congress and many states have passed various laws restricting that right; as a result, access to abortion has narrowed. The change in the balance of power in the Supreme Court, now with a 6-3 conservative majority (although Chief Justice John Roberts, who is considered conservative, sided with liberals to block the abortion law), has motivated the anti-abortion movement’s offensive against abortion. The new Texas law is not unique; other Southern Bible Belt states have also proposed anti-abortion laws. The Supreme Court has already received appeals to a law in Mississippi that bans abortions at 15 weeks. The court is expected to make a ruling next year, when Congressional elections take place.

Joe Biden has sharply criticized the Supreme Court ruling on the Texas law and promised that his administration will “protect and defend” the constitutional rights established under Roe v. Wade. The pro-abortion activists have called on Congress to tackle the issue of abortion and to pass a law that would block anti-abortion laws in certain states. Democrats hold a majority in both houses of Congress, but it is not enough to pass important bills; apart from the spending bills, all the others require a majority of at least 60 votes in the Senate.** Meanwhile, the Senate holds an equal number (50) of Republicans and Democrats; the only control the Democrats have over legislative procedures comes from Vice President Kamala Harris, who can cast the tie-breaking vote.

According to a poll conducted by NBC in August, 54% of Americans believe that abortion should be legal in all or most cases. This indicates that a Supreme Court decision to ban abortion would not be taken very well. Theoretically, the Supreme Court is above politics, but in practice, the justices do not ignore the mood swings of the general public. The Democratic Party, with women being among its key voters, hopes that the Republican anti-abortion offensive will motivate its supporters to help them win next year’s midterm.

*Editor’s Note: This article is available in the original Polish only to subscribers.

**Editor’s Note: A 60-vote supermajority is only required in the Senate to shut down a filibuster by the opposition.