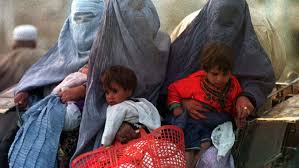 Confusion in Afghanistan is widespread as U.S. troops are set to fully withdraw.

It is reported that, in retaliation for the suicide bombings near Kabul airport, U.S. military forces bombed Islamic State-Khorasan, resulting in civilian casualties. This “chain of retaliation” makes it difficult to bring the situation under control.

The suicide bombings by the Islamic State group’s Afghanistan and Pakistan arm killed 13 U.S. service members and about 170 Afghans gathered at the airport in hopes of leaving the country. Many more were wounded.

This is a despicable act of terrorism that took advantage of the confusion surrounding the collapse of the Afghanistan government and the withdrawal of U.S. troops and cannot be tolerated. On the other hand, the United States should also be held accountable for dismissing the threat of terrorism and hastily removing troops.

Twenty years have passed since the 9/11 terrorist attacks on the U.S.; Afghanistan is once again in the midst of chaos with no end in sight.

The Islamic State group views the Taliban, the Islamic organization that seized power in Afghanistan, as “renegades” and American and European powers as “Crusades.” It seems that their goal was to make their presence known by carrying out terrorist attacks while the world was focused on the withdrawal of U.S. troops.

In response, President Joe Biden proclaimed that he will continue counterterrorism operations and, addressing the perpetrators of the attack, said, “we will hunt you down and make you pay.”

However, because troops have been withdrawn, intelligence on the actual location of Islamic State-Khorasan is scarce and it is doubtful if search and destroy operations can continue.

The U.S. and Great Britain have stated that evacuation efforts will continue for the many remaining people who hope to leave Afghanistan.

The U.S. Department of State said in a joint statement with more than 90 countries, including Japan, that the Taliban has guaranteed that all foreigners and Afghan people with travel permits can move abroad.

But as the possibility of another terrorist attack increases, it is uncertain whether the necessary safety around Kabul and the airport can be ensured. Every country’s activities in Afghanistan, including Japan’s, are likely to be terminated.

The Taliban will effectively maintain domestic security after the withdrawal of the U.S. military, but some U.S. experts have pointed out that “Islamic State-Khorasan cannot be controlled without the cooperation of the U.S. military.”* It is feared that harsh Islamic policies such as restrictions on women’s education and employment will be reinstated from the previous terrorist administration.

Afghanistan should not be a hotbed of terrorism. The international community must unite and respond.