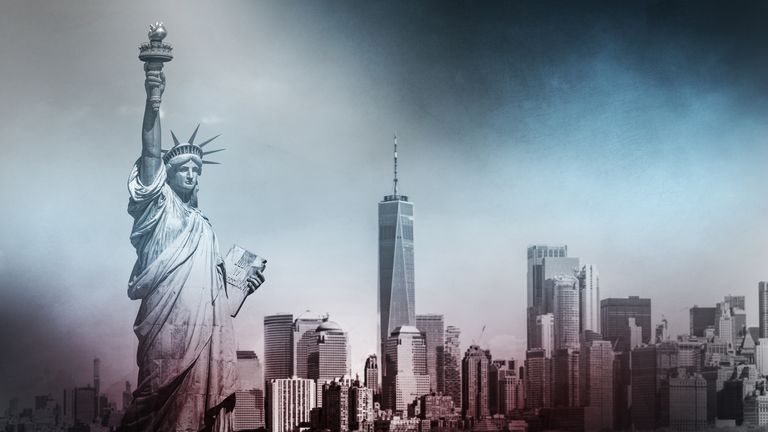 There’s a fire truck with the end of its ladder lost in the building’s warped iron pillars. The exhibits of the 9/11 Memorial & Museum at the site of the World Trade Center that collapsed after they were attacked by two passenger planes will tug at your heart. Twenty years have passed since the coordinated terror attacks against America in 2001. A woman visiting the museum from Texas tells me, “The scene was unimaginable. I always want to pray to God whenever I think of the victims.”*

The opening of the 21st century took a dark tragic turn when al-Qaida, an international terrorist organization, mercilessly destroyed the symbols of prosperity in the world’s strongest country. The war in Afghanistan, the longest war in American history, began as revenge against the Taliban, an Islamist group, and reached its bitter conclusion with the revival of the Taliban and its triumphal seizure of Afghanistan following the American military’s indifferent withdrawal.

A Turning Point in the Pursuit of Free Competition

How have the last 20 years transpired? The fact that the situation in Afghanistan has reverted nearly to where it started leaves big questions for the post-terror world. And how will the next 20 years be? I tried to think about this as I interviewed three observers who’ve watched the changes in the global order.

Bill Emmott, former editor-in-chief of The Economist, believes the war that began on 9/11 was a “war without victors.” He says that “al-Qaida lost. Osama bin Laden, the mastermind behind the coordinated terror, was killed. But America was forced to sacrifice a lot of money and blood in the war and its international role weakened.”*

At the time of the coordinated terrorist attack, globalization and free competition dominated the trend in world economics. The idea was that easing the exchange of goods and services would make everyone richer. The euro, Europe’s single currency, had been introduced two years earlier, boosting its Europe’s competitiveness as a community. Information technology was expected to enhance economic activity and everyday convenience.

Twenty years later, a series of models have reached a turning point. The idea of prioritizing efficiency and profit is attracting strong criticism from the public, and social considerations like fairness and mitigating inequality have become vital.

The COVID-19 catastrophe has led to big government in every country, with America leading the way. British historian Niall Ferguson calls this Keynes’s counterattack. He believes that the trend of permitting massive financial expenditure, which began with the global financial crisis of 2008, will intensify, and inflation like that of the 1970s will return.

Chinese-American relations have also changed. In 2001, it was none other than America that pushed for China’s admission to the World Trade Organization behind the scenes. The fleeting expectation that China would eventually endorse free trade as well was betrayed. Under President Xi Jinping, who increased the level of authoritarianism in his country, China competed fiercely with America in high technology and security, and the relationship has become confrontational.

“Mutual trust between China and America vanished during the COVID-19 disaster. Every country put itself first and doubled down on mercantilism. Right after the coordinated terrorist attack on America, even Russia joined the allies to help the U.S. There was strong cooperation during the financial crisis at the Group of 20 summit. It was very different from today’s world order.” Ian Bremmer, CEO of America’s Eurasia Group, tells of the ensuing hardship.

Emmott, Ferguson and Bremmer agree that Chinese-American relations are the greatest concern for the next 20 years.

Ferguson says that America and China have entered a second Cold War. “The possibility of a hot war is extremely high. A localized war in Taiwan or somewhere may break out soon,” he notes. He worries that “great wars occur when the aggressor thinks that speedy action is to its advantage and great powers fail to prevent them. The Biden administration pulling out of Afghanistan is an omen that America won’t necessarily fight at any cost.”*

“The world will become a little more dangerous,” Bremmer says. “Along with the absence of a policeman, there is no common ground or sense of trust.”* Emmott asserts that “the worst possibility would be a true war between superpowers. When America and democracy weaken, that may occur.”*

But the three observers are not entirely pessimistic. In each of their comments, I heard the expectation that America would survive the upheaval in democracy and overcome the decline in its status as a world leader. And its vitality will rebound in the medium term.

“America’s taking a long rehabilitation course; it’ll recover,” Emmott said.* Emmott anticipates that the process that continued for about 15 years beginning in 1975 will repeat itself. It was a time when America regained the confidence it lost after the defeat in the Vietnam War and Watergate.

Ferguson also predicts that “the general idea that America will decline and China will expand will end in error,” and estimates that there is a 66% chance of a medium-term recovery for America. This is because he sees China, which governs by concentrating its power in the hands of a few and through large-scale surveillance, as a “completely unsustainable model.”*

The problem is that process. “It’s important for America to get over its divisions and maintain its position as the strongest country,” Bremmer says.* Bremmer says it is vital for the American government to push through policies that restore the faith of the middle class by addressing inequality and for allies like Japan to urge America and China to cooperate over epidemics and climate change.

Increasing numbers of people are getting biased information from social media, which creates social divisions and turbulence in a democracy. Giant information technology firms have overwhelmed the digital world and “become players that determine geopolitics,” according to Bremmer.* Regulating technological power is also a difficult issue.

Emmott is looking forward to the appearance of “a leader like former President Reagan to pep the people up.”* Biden is spending his political capital on America’s deep divisions, and the chaotic military withdrawal from Afghanistan is affecting how his administration is functioning. Can we expect a leader to emerge who would draw a line on Donald Trump’s policies and “ restore America’s confidence and optimism, in Ferguson’s words?

The latent power of the world’s strongest country, which ended its longest war and looks ahead to another 20 years, will determine the course of a dangerous world.