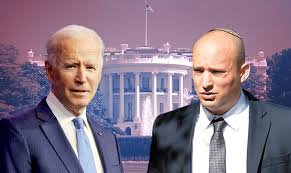 There is nothing that will stop Iran from turning into a nuclear power, so the breathless headlines about the meeting between Bennett and Biden is nonsense.

Naftali Bennett is a talented person; thoughtful, politically correct, and fluent English speaker. I admire him. At the same time, in my view, the media hubbub around his visit to Washington was surprising and caused me to lose faith in journalists, some of whom were perceived as wanting nothing more than that Bibi Netanyahu should never return to office. In fact, it seems that some of the media did not do their job of shedding a critical eye on the government, and instead, greatly blew the visit’s mighty achievements way out of proportion. One of those reporters even went as far as saying that Bennett returned having gotten everything he wanted.

First, you have to understand that the international visits of government leaders are not meant for negotiating big results in a one-hour meeting. Such trips do not generate strategic political or security changes. Sometimes, the important thing in meetings between leaders is the temporary, strategic need for the meeting to happen. These short meetings are superficial and provide a great display of fireworks. The commentators who look for scoops, and especially those who want to help the visiting leader, attribute great and naive importance to trifles and empty words.

It appears there were no negotiations between Joe Biden and Naftali Bennett that were central to the interests of their respective countries. Those negotiations do not occur during brief, personal meetings; they don’t even happen in bigger meetings. True discussion is conducted at a professional level by professionals. It is not appropriate to change basic policy during short meetings between leaders.

The Iranian regime understands that its current religious-political existence depends on having a system of nuclear weapons. So we understand why Iran has no reason to give up on it.

The United States has been trying for almost two decades to get out of the Middle East. That’s because it doesn’t need the crude oil which is produced here, and because the Middle East’s economic importance currently ranks lower than that of Southeast Asia. America has withdrawn most of its forces from Iraq, Syria and recently Afghanistan, which the U.S. departed in shame. In my opinion, America has decided to accept a nuclear Iran just as it accepted other countries including Pakistan, India and North Korea. If Iran does not develop intercontinental missiles, America will not interfere.

America has also decided to accept the chance of terror in the Middle East, and not endanger American soldiers by assisting countries in the region. A naive Europe has fallen in love with a status similar to the orchestra on the Titanic and is holding on to the railings for dear life, so much so that it is willing to accept anything, as long as its own citizens can live reasonably for now. So there will be no help from Europe in reaching an Iranian nuclear agreement.

In addition, it’s been proven in the past two decades that Iran can tolerate sanctions and the United States cannot tolerate war. So America will put up with a nuclear Iran.

The announcement that Iran will not build nuclear weapons is not worth the microphone used to announce it. Many leaders have asserted this before Biden and Bennett. George W. Bush said so, as did Barack Obama and Donald Trump. As these honored presidents make these declarations, the centrifuges continue to enrich uranium and Iran continues to develop its missiles. There is nothing that will stop Iran from turning into a nuclear power. The announcement, the pièce de résistance of the meeting between Biden and Bennett, that Iran will not build nuclear weapons, is nonsense. And if you think that smart people like Biden and Bennett don’t understand that, you’re mistaken.

The writer is a member of the nongovernmental agency Guardians of Israel, a national forum of commanders.