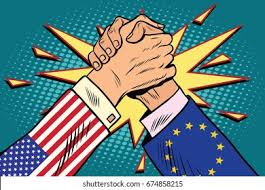 Relations between America and Western Europe have been shaken by successive events. These events also indicate that the dissolution of the alliance formed by both parties at the end of World War II is imminent.

For starters, former President Donald Trump imposed tariffs on a number of European products, such as iron, aluminum, Airbus aircraft and wine, among other things. These measures were taken as part of the “America First” policy that prioritized bilateral trade relations over international trade agreements previously signed by the U.S.

This was followed by Trump’s repeated demands that NATO member states, which are predominantly European, raise the ceiling of their spending on defense to 2% of their national product. Meanwhile, Defense Secretary Gen. James Mattis warned that the United States might reduce its security commitment to these countries if they did not do as they were asked.

To increase pressure on European countries to raise their defense budgets, Trump said he intended to reduce the U.S. military presence in Germany by two-thirds, a decision he announced at the end of his term and that President Joe Biden postponed.

Divisions between Western Europe and America escalated further after Trump withdrew the United States from the nuclear agreement with Iran, a deal supported by France, Germany, Britain, China and Russia.

Western Europe believed that replacing Trump would end its division with America. In fact, they thought Trump was an emergency in American politics; that once he was gone, relations between the allies would return to what they were.

The biggest shock for Europe was seeing how Biden followed Trump’s foreign policy, albeit more diplomatically. Western European countries believed that America under Biden would quickly return to the nuclear agreement with Iran and lift economic sanctions on that country, thus providing them with a new market for trade and investment.

But Biden has not done that yet; he may never do so if he feels that returning to this agreement will deprive him of congressional support for investment in renewable energy and American infrastructure.

Biden also decided to withdraw from Afghanistan without coordinating with Western European countries. Moreover, when Germany, France and even Britain asked to postpone the withdrawal date for several months so that they could secure the exit of their forces and their Afghan allies, Biden refused.

France suffered the strongest blow from the United States. Years after signing contracts under which it would deliver submarines to Australia for $90 billion, the Biden administration announced an alliance between America, Australia and Britain directed against China. The agreement announced under the name of the tripartite security partnership known as AUKUS provided that the United States and Britain would supply nuclear-powered submarines to Australia instead of France.

This surprise was shocking to France for three reasons. First, negotiations between America, Britain and Australia had been secretly taking place for 18 months (having begun during the Trump administration). Second, France lost what it considered a historic deal without the slightest idea that such a thing would happen. Third, France was excluded from the alliance despite the fact it has four military bases in the Indian and Pacific Oceans, to protect its island territories and trade relations with former colonies.

The blow was painful enough that France recalled its ambassadors in America and Australia, its French ambassador in Washington calling the development a “stab in the back.”

It is clear that Western Europe and the United States are at a crossroads. The United States sees China as its biggest threat, and this requires that it strengthen its relations with Australia, India, Japan and South Korea. It is also seeing to it that America’s special relationship with Britain serves its interests, especially after Brexit.

The United States wants Western Europe to help confront China, and wants it to be more assertive in its relations with Russia. But Western Europe has intertwined interests with both China and Russia. The volume of trade exchange between China and the European Union is the largest in the world, and negotiations are well on the way toward China and Russia signing strategic trade treaties.

While Western Europe is worried about Russia’s behavior in Ukraine and Syria, it believes that conflict with Russia does not serve its interests.

Germany has completed its northern gas pipeline to Russia, which means that it will depend on this country for gas imports. France, in turn, has allied with Russia over the issues in Libya.

Europe, which experienced two world wars on its soil, definitely does not want a third destructive war. Instead, it wants to resolve its conflict with Russia over Ukraine through dialogue that serves mutual interests.

The conflict between America and Western Europe will not lead to the disintegration of NATO right away, nor will it lead to an open clash between the two allies. But the conflict indicates that international relations have begun to change. It is also an opportunity for certain countries to build their independence and capabilities, and change their alliances in a way that serves their interests.