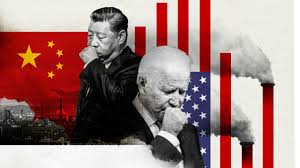 The two giants are flexing their muscles, yet finding compromise on climate.

We are still at the tactical maneuvers stage, where tensions can be appeased with promises. So, at the United Nations in New York, President Joe Biden and his Chinese counterpart, Xi Jinping, took a new step toward a diplomatic solution on the future of the climate.

Biden said he would double U.S. assistance to developing countries to help them adapt to climate change; Xi declared China will end its foreign investments in coal plants. Praised by U.N. Secretary-General Antonio Guterres, the move provides new momentum for the climate conference scheduled to take place Dec. 1-12 in Glasgow.

Another fact worth noting is that the Chinese and American delegations are pursuing high-level talks at a time when both Washington and Beijing are flexing their military muscle and seeking to secure regional free trade agreements to fill the void left by the World Trade Organization in Geneva.

Beijing Has Gained the Upper Hand in Trade

However, despite appearances, we are not living in a bipolar word where one country may be tempted to supersede the other. Indeed, while the United States retains an overwhelming military advantage over China, Beijing has gained the upper hand in trade. In 20 years, China has become the No. 1 trading partner of most countries on the planet, far ahead of the United States or Europe. This shift has forced both giants into a tie. It pushed them to agree at the very least on the most important issue, namely climate change, where neither of them can claim political or economic gains in case of failure. This wasn’t the case during the first climate conferences.

About Mireille Dedios 43 Articles
I’m an independent French translator based in the Boston area, certified by the American Translators Association (French into English). I honed my translating skills as part of the executive teams of various French and US companies, including State Street Corporation, where as a member of the Public Relations team, I tracked the news media globally and translated press releases into French. I enjoyed this work tremendously and continue to look for opportunities combining translation and news coverage, culture, history and international relations.