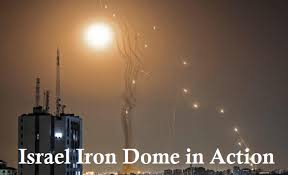 The Iron Dome crisis is a wake-up call. Indeed, at the end of the day, Israel will still get help funding the batteries and intercepting rockets, and will retain broad support from the two parties — but the way in which legislators from the American political left squeezed the Democratic leadership on the issue of the Iron Dome Is worrisome and demands action. Here are seven possible steps.

In the best case scenario, the group of progressives embarrassed the White House and the leadership of their party at Israel’s expense. Another way to look at it is that the legislators demanded an end to helping Israel in order to give a signal to their constituents — meaning that, in their estimation, there is an audience who would be appreciative. Worse still would be the idea that a minority of the members of Congress are convinced that financing the Iron Dome — don’t forget that it is completely defensive and saves the lives of many Israelis — is not “progressive.”

There are many reasons for the distancing between the Democrats and Israel, and many of them are connected to Israeli policies. Some are also connected to American policies, but their centrality and significance does not depend on either side but rather on demographic and technological shifts. These changes are responsible for the fact that more and more Democrats, who constitute the greatest majority of the citizens of America, the youth of America and the Jews of America, do not see Israel as a strategic ally of the United States; they see Israel as not upholding democratic standards within the conflict.

Some will say that the solution is to put all our efforts into the Republican Party, due to a sense that the Democrats are already lost. This is a colossal mistake: There will be Democratic presidents after Joe Biden, and if the Democrats lose the majority in the House of Representatives in the midterm elections, they will return in the future. In no other sphere of life do we put all of our eggs in one basket, so why would we do it with the United States?

Instead, Israel should rebuild its relationship with the Democratic Party. A change in the rhetoric would be good, but actions speak louder than words. Here are some beginning steps to learn from.

Most Israelis are not experts in the minutiae of American politics. They most certainly do not understand the progressive outlook, or the nuances or subtleties of how the progressives view Israel. Whoever is responsible for Israel’s public diplomacy must not only know how to speak English, but also how to speak liberal.

Make distinctions: One in six members of Congress define themselves as progressive. It would be a mistake to describe all of them as having the same views and to relate to them as to a single entity. Instead one must make distinctions among them.

Strengthen our supporters: Pro-Israel progressives exist, and they are not few in number. They exist in civil society, in private and political sectors, and include senior members of Congress. Israel has to strengthen them and give them a forum as proof that it is possible to be progressive and also support Israel.

Ignore those who are against us: There is a minority that we will not be able to convince; with them all dialogue is a losing battle. And when we bring up politicians like Rashida Tlaib and Ilhan Omar, who oppose Israel’s existence, we only strengthen them and their political camp.

Wean ourselves from propaganda: No one likes to have things explained to them; this kind of effort antagonizes and is destined for failure. Instead, Israel should move toward a consciousness of public diplomacy which demands a more complex description of the situation. Rather than repeating, “Hamas is a terror organization,” instead speak about laws of war; elimination of aggression because of collateral damage; the cynical use by Hamas of human shields; and Israel’s hopes for peace.

Demonstrate readiness for peace: Even if a political solution is not practical — because of the politics here, the weakness of Abu Mazen, the intra-Palestinian rift or any other reason — Israel has to prove that it is heading in that direction. The broadening of economic cooperation, humanitarian gestures and the strengthening of the Palestinian authority, which with all its flaws is preferable to Hamas, are necessary steps.

Broaden the scope of Israel’s relationship with the United States to civilian arenas: Barack Obama, Donald Trump and Joe Biden are very different presidents, but they all wanted to disengage from the Middle East and put their resources in other areas, foremost into the challenge presented by China. As long as Israel continues to keep issues like Iran, Hezbollah and the Palestinian conflict as a focus, it will be perceived as a burden.

If we expand cooperation (not only at the state level, but also in the private sector and civil society) in areas such as climate change and public health, which are at the heart of the Democratic agenda, Israel could rebrand itself as an asset. Of course, that cannot come at the expense of the political conversation and the hope for peace — G-d forbid that we would be accused of green washing — but in addition to those.

One thing is certain: It won’t be easy. Criticism of our policies also comes from our friends, and real opposition to the very existence of Israel is a phenomenon that won’t go away very soon, or even at all.

It is very tempting to put all of our hope in the Republicans, but this is a strategy that is doomed to fail — partly because of the cyclical nature of American politics, and especially because it will only accelerate the trend of distancing from the Democrats. We can and must find a way to turn this around.

Rotem Oreg is the founder of the Israel-Democrat treaty, which works to build a new Israeli-Democratic relationship based on liberal values and commitment to liberal agendas.