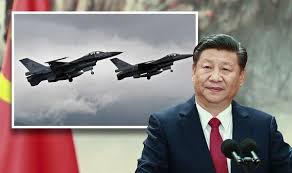 Since its founding in 1949, the People’s Republic of China has never set aside its territorial claims over the island of Taiwan, and has continually promised to incorporate Taiwan. During this time, China has tried to accomplish its goal of reunification through diplomacy and peaceful means, rather than by turning to its military strength. However, on Oct. 1, an alarm was sounded for Taipei. On that day, the 72nd anniversary of the founding of the PRC, China deployed 28 of its military aircraft to southwest Taiwan, and over the following days, two more groups of 29 and 16 Chinese aircraft flew toward Taiwan on a similar flightpath. The number of flights reached a peak last Monday with 52 aircraft.

These flights were unprecedented in recent years, and conflicted with the tone of Chinese President Xi Jinping’s speech following the flights. Last Saturday, the Chinese president spoke in the Great Hall of the People on the anniversary of the Chinese Revolution and the overthrow of the last imperial dynasty in 1911. Although he spoke of the “historical responsibility to unite the entire Chinese motherland,” and once again promised to fulfill that responsibility, he emphasized that “a peaceful reunification best meets the overall interests of the Taiwanese people, but China will protect its sovereignty and unity.” These statements suggested a preference for diplomacy over military options, and showed that a peaceful process for returning Taiwan to China is still Beijing’s priority. Still, given his gentle tone, Xi was in no way walking back the previous week’s military flights. Both the flights and the president’s peaceful manner are part of a coherent strategy, and both the flights and president’s approach took place taking into account changes that have occurred in recent months.

The Chinese aircraft flying toward Taiwan and Xi’s remarks about the island are a balancing act by Beijing between soft and hard power. To put it another way, China sees two choices, one diplomatic and one military, to resolve this challenge. Faced with President Joe Biden’s hostile policy and posturing, China deemed it necessary to remind the U.S. that diplomacy is not the only option on the table. Those flights were a way to show off the Chinese military hard power option as well. In August, the Biden administration approved its first contract for arms sales to Taiwan, a contract which is rumored to be worth $750 million, and includes Howitzer cannons, armored vehicles and machine guns. Although this contract is significantly smaller than the previous administration’s agreement with Taiwan, which was valued at $1.8 billion, a recent report by The Wall Street Journal on the confidential training of Taiwanese forces by the U.S. showed that American military support for Taiwan is not limited to weapons sales, and also extends to on-the-ground assistance.

Beyond that, the recent security agreement between the U.S., the U.K. and Australia heightened sensitivity in Beijing, because the agreement suggests a long-term, hostile American plan involving Chinese coastal waters. Because of this, China decided that this year, unlike in previous years, it would not limit itself to simply sending political messages and reiterating slogans about peacefully returning Taiwan to China. Instead, through a show of military force, China demonstrated its readiness to defend the right to national sovereignty. In other words, Beijing’s decision to send those aircraft was a way to test Washington, and in light of these recent events, to see what the U.S. reaction would be. Last Wednesday, National Security Advisor Jake Sullivan met with Director of the Chinese Central Foreign Affairs Commission Office Yang Jiechi, after which Sullivan commented on their attempts to avoid conflict. This shows the U.S. got China’s message about China’s capacity for hard power, and that they recognized the need to deescalate the situation through immediate communication with China. So it appears that, with this test, Beijing has been able to prove to the U.S. that it is serious about defending its national interests, and the U.S. has received the message loud and clear. Nonetheless, it seems unlikely that the calm after a tension-filled week will last long, and Beijing will soon be forced to once again display its hard power in response to America’s aggressive approach.